Wordle: how to play, strategies, tips and tricks 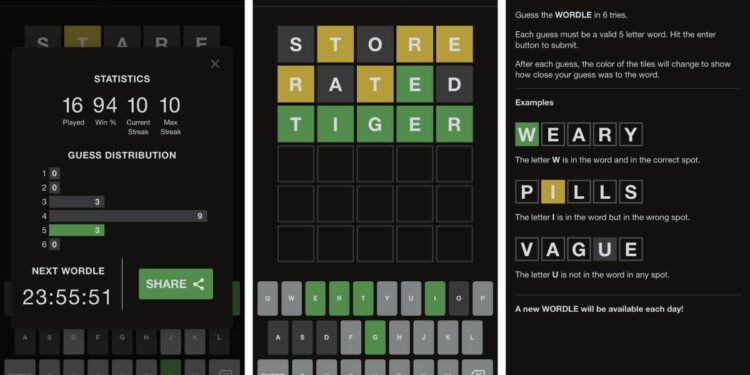 Wordle is all the rage right now, with hundreds of thousands of people around the world competing to guess the same five-letter word every day. With just six tries and one round to play every 24 hours, Wordle offers just the right kind of challenge to make people feel competitive. It is easy to understand and requires no more than a basic knowledge of the English language, making it enjoyable for players of all levels. For most people, of course, the main attraction is the colorful block diagram you post on your social media every day, showing how your guesses have progressed and how many tries you need. If you’ve managed to last a streak of days, you know how tempting it is to keep going!

Here is a quick guide to playing Wordle. We will go through some tips and strategies developed after weeks of first hand gameplay of this addictive game. This is all you need to keep in mind to win the game, so read on to keep your winning streak going for as long as possible.

What is Wordle? How to play

Wordle is a simple word guessing game. It is available as a website and can be played from any computer or mobile device. There is no Wordle app, so be careful – many scammers have tried to launch clones to gain views and take advantage of ads. The original Wordle website has no ads and doesn’t try to sell you upgrades or boosters – at least as of now – which is a huge plus these days.

When you load the Wordle website, you will see a simple grid and keyboard. You type in your first five letter word and that will be the top row of the grid. There are no hints – your first guess should be completely random. Each letter in the correct space is highlighted in green. Any letter that is in the word, but not in that exact space, will be highlighted in yellow. Letters that are not in the word are grayed out.

On the third try, we know that the letter T can only be placed at the end because all other slots have been eliminated.

As you play, the keys on the on-screen keyboard also change color to help you narrow down your guesses. It becomes easy to skip the gray keys when trying to come up with letter combinations that fit around the positions you’ve already locked in green. The more guesses you use, the more redundant letters you eliminate and the easier the answer will be to guess from what’s left.

There is no way to undo a turn in Wordle and no second chance. You can of course replay the day round on a different device, but that will trigger a new streak (or you can try guessing first on a separate device and then enter the correct answer on your primary to artificially sustain a streak to keep) . There is currently no way to sync devices, so if you clear your history or don’t always have access to the same PC or phone, your Wordle sequence will be interrupted.

First, start with an estimate that uses the most commonly used letters in the English language: by most accounts, these are E, A, T, R, S, I, O, and N. The least common are usually Q, Z, J, X and V. Don’t start with words that repeat letters – it’s more valuable to eliminate regular letters. For example, “stare” is a better bet than “start” because it leaves less ambiguity once the game reveals which letters are in and which are out.

Eliminating more vowels early on drastically limits the possible Wordle answer. Once you’ve locked one or two letters in place, you’ll be able to see where vowels fall, helping you guess what other letters are working around what you already have. If you eliminate U, there is almost no chance of a Q appearing anywhere in your word.

It may also be helpful to consider which letters are most commonly used at different positions in a five-letter word. A five letter word is unlikely to end with, say, the letters I or U, but S and E are most likely in the last spot. Consider common endings such as -ED, -ER, and -ING. If you have a yellow letter, think about how many words you can make with that letter in each of your available boxes. If you have a consonant locked in the second space and a vowel in the third, you probably have a combination like ST, PR, GR, FL, etc. If one of those letters has already been eliminated, subsequent guesses are more likely to be correct to be.

If a letter is marked yellow after a Wordle spin, it cannot be in the same position on a subsequent bet. It should also not be in a position that has already turned green. This means you don’t have to consider trying all four remaining slots for a yellow letter – the correct position is often easy to figure out.

It helps to actually type words you’re considering so you can see how each letter placement fits with the information you already have. However, before pressing ‘Enter’ to confirm a guess, you should always check that you are not repeating a mistake. Don’t throw away attempts with words that contain a letter you’ve already deleted, or letters in a position where they can’t be. It can be tempting to try a word with lots of regular letters to see if the rest works, but that’s a waste of an effort – just think a little harder to find a word that fits within the rules that you have already limited.

Keep in mind that Wordle uses American English spelling, so some words that you may not even consider, such as “favor”, “color”, etc., are in fact possible matches. This exact problem caused a furore on social media in early January – many players around the world were not used to thinking about such spellings. These aren’t even five letter words by our standards when spelled correctly!

Don’t forget to consider words with repeated letters as you progress with your Wordle guesses. You may be looking for useful letter combinations within the unused letters on your keyboard, but the grid doesn’t tell you whether a letter that is green in one spot is also a possible yellow letter. Some letters are often doubled: SS, NN, MM, TT, etc, but the possibilities are limited within five-letter words.

Don’t get too caught up in rhyming patterns. For example, if you captured -ING as the last three letters of your word, you’ll be tempted to keep guessing like “throw,” “thing,” and “sting.” But “go” and “do” are also potential matches.

If you find yourself stuck, many websites offer hints or even publish the answer every day. Stay away from these search results if you hate spoilers! This is also a good reason not to feel too bad when you see other people posting about their huge successes or lucky wins – you can never be sure that they haven’t had help. As with social media in general, not everything is always as it seems. Wordle can be competitive, but remember to just have fun every day!