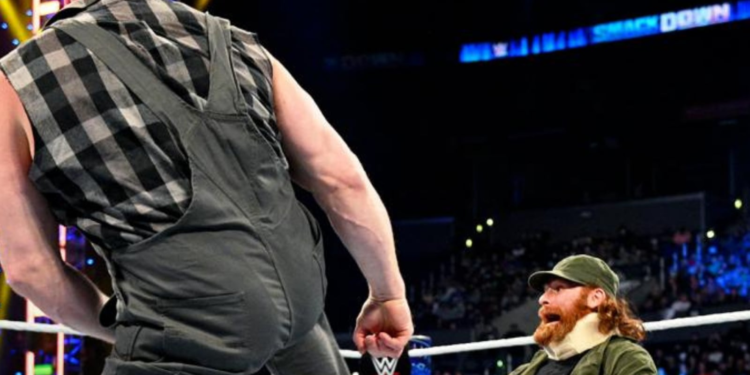 A wheelchair-bound Sami Zayn kicked off the show, still reeling under the brutal assault inflicted on him by Brock Lesnar on last week’s episode. He said the betrayal hurt him more than the physical. Paul Heyman cut in and apologized to fans for subjecting Zayn’s complaints. As the two continued their chatter, Lesnar made his way to the ring to tease that Heyman is about to return as his attorney. Their impassioned diatribes gave way to The Beast beating the medics, then Zayn, culminating in an F-5.

Here are the results and highlights from the December 10 episode of WWE SmackDown:

Shinsuke Nakamura and Rick Boogs vs Los Lotharios: The minute and a half match ended quickly as Boogs delivered a plane spin to Humberto, while Intercontinental champion Nakamura pushed him away with a kick in the face and Kinshasa.

Drew McIntyre to Sheamus: The Scottish Superstar defeated Sheamus via pinfall after a Claymore. Before the match, McIntyre confronted Adam Pearce and tucked Angela into his desk in response to being left out of the Black Friday Battle Royal two weeks ago.

Naomi vs Sonya Deville and Xia Li’s Debut: In the show’s first female fight, Deville would go head-to-head with Naomi in one-on-one action, but instead had to go head-to-head with Natalya and Shayna Baszler. When the trio tried to defeat Naomi before the match, Xia Li not only made her debut, but also helped Naomi fend off Deville, Natalya, and Baszler.

Toni Storm v Charlotte Flair: In a special Championship Contender’s Match, SmackDown Women’s Champion Charlotte Flair had to be disqualified for not being able to stop attacking Storm on the ring apron.

Triple Threat Tag Team Match – The New Day vs. The Usos and RK-Bro: The triple threat contest to determine the best tag team in WWE ended via pinfall after Kofi Kingston punched Jimmy Uso in the main event.