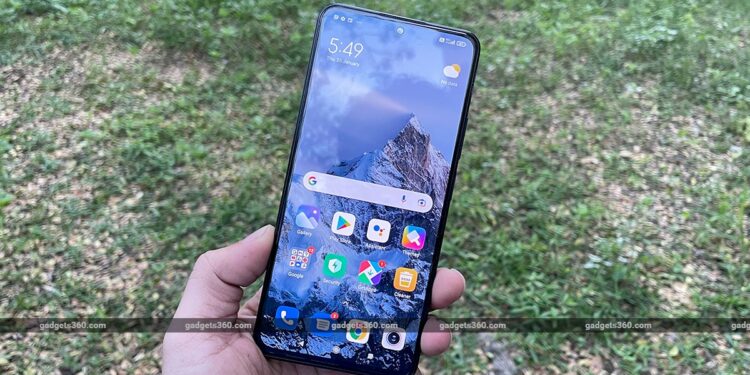 Xiaomi kicks off the new year with the launch of the Xiaomi 11i HyperCharge 5G, which it claims is India’s fastest-charging smartphone. While several manufacturers have pushed for faster charging as a selling point, Xiaomi is the first company to launch a smartphone capable of fast 120W charging in India. The 11i HyperCharge 5G should be fully charged in just 15 minutes. So, is this phone just a one-trick pony, or can it compete in other aspects as well? I put it to the test to find out.

The Xiaomi 11i HyperCharge 5G is available with 6 GB or 8 GB of RAM and both variants have 128 GB of internal storage. The basic variant costs Rs. 26,999 in India while the other is priced at Rs 28,999. Xiaomi is offering a Rs. 1,500 early bird discount and SBI cardholders can claim an additional Rs. 2,500 cashback at launch time.

The Xiaomi 11i HyperCharge 5G is a large phone and has a new design with flattened sides. It’s still comfortable to hold because the corners are rounded so they don’t dig into your palms. The polycarbonate frame of the 11i HyperCharge doesn’t feel cheap, but the weight of 204 grams does stand out.

You get a large 6.67-inch screen on the Xiaomi 11i HyperCharge 5G. It has a small perforation at the top and thin edges all around. The side-mounted fingerprint scanner is well placed and my thumb naturally rested on it. The volume buttons are also within easy reach. While the right side has all the buttons, the left side is bare. The phone also features stereo speakers, a 3.5mm headphone jack, an IR emitter and a USB Type-C port.

The back panel of the Xiaomi 11i HyperCharge 5G is made of glass which gives it a premium look. I had the Camo Green variant, which has a matte finish. The color shines through when the light hits the surface at the right angle. The camera module is large and will certainly attract a lot of attention.

While the glass back does a good job of hiding fingerprints, Xiaomi bundles a transparent case in the box along with the large 120W charger.

The Xiaomi 11i HyperCharge 5G has a 6.67-inch full-HD + AMOLED display with a maximum refresh rate of 120 Hz. It has a peak brightness of 1200 nits and Corning Gorilla Glass 5 for protection. Xiaomi has chosen the MediaTek Dimensity 920 SoC to power the 11i HyperCharge 5G. This is a new SoC and is also seen in the Vivo V23 Pro in India.

The internal memory is expandable with a microSD card in the hybrid dual-SIM tray. Xiaomi also offers a memory expansion feature that uses some of the internal storage as RAM. On my device, this feature allowed me to add an additional 3 GB of virtual RAM, and this feature is enabled by default. The Xiaomi 11i HyperCharge 5G is packed in a 4,500 mAh battery, which has a slightly lower capacity than the one in the Xiaomi 11i 5G launched next to it. These two models are identical apart from their different battery capacities and maximum charging speeds.

Xiaomi 11i HyperCharge 5G has a side-mounted fingerprint scanner

In terms of software, the phone runs MIUI 12.5 on top of Android 11. My device had the November Android security patch. MIUI has multiple customizations and I also noticed a large number of pre-installed apps. You can remove these apps, which makes the interface more clutter-free. If you swipe right from the home screen, you’ll see Xiaomi’s “App Vault” by default. This can now be swapped to show the Google Discover news feed or turned off altogether.

Theming is possible on the 11i HyperCharge 5G, so you can customize the interface to your taste. Some of the other features include Dual Apps, which lets you run two instances of the same app, and Game Turbo, which lets you access all your games in one place, manage device performance, and block calls and notifications while gaming.

The Xiaomi 11i HyperCharge 5G’s AMOLED display is bright, with good viewing angles and clarity. The high refresh rate makes scrolling and moving in supported games super smooth. However, the 120Hz setting is not enabled by default. The speakers are loud and stereo sound is added to the overall video viewing experience. I found the side-mounted fingerprint scanner to be quick and it only took a single tap to unlock the phone. Multitasking was a breeze and I was able to switch between multiple apps without a hitch.

I ran synthetic benchmarks to see how the MediaTek Dimensity 920 SoC stacks up against the competition. In the AnTuTu, the Xiaomi 11i HyperCharge 5G scored 4,26,791 points. It also scored 742 and 2240 points in Geekbench 5’s single-core and multi-core tests, respectively. In the graphics benchmarking app GFXBench’s T-Rex and Car Chase scenes, the 11i HyperCharge 5G scored 82 fps and 21 fps, respectively. The Motorola Edge 20s (Review), with its Qualcomm Snapdragon 778G SoC, scored higher in each of these tests.

Xiaomi bundles a large 120W charger with the 11i HyperCharge 5G

I played Battlegrounds Mobile India (BGMI) on the Xiaomi 11i HyperCharge 5G which defaulted to HD graphics and ‘High’ framerate settings. The game ran on these settings without any problems and I didn’t notice any hitches. After playing the game for 26 minutes, I noticed a six percent drop in battery level, which is very good. The smartphone also did not feel warm.

The Xiaomi 11i HyperCharge 5G offered good battery life and easily lasted more than a day with my use. In our HD video loop test, the phone ran for 15 hours and 57 minutes. Charging the phone was ridiculously fast with the included 120W charger. The 11i HyperCharge 5G reached 72 percent in just 10 minutes, but after that it took a total of 20 minutes to fully charge. I had to toggle the Boost charging speed in the settings to take advantage of the fastest possible charging speed with the 120W charger, which is not enabled by default.

The Xiaomi 11i HyperCharge 5G has a triple camera setup consisting of a 108-megapixel primary camera with an f/1.89 aperture, an 8-megapixel ultra-wide-angle camera and a 2-megapixel macro camera. For selfies, it has a 16-megapixel front shooter. The camera app is similar to what we’ve seen on other recent Xiaomi smartphones, and all the expected shooting modes are there, along with quick toggles for HDR and AI. The macro switch is still hidden in a submenu, making it easy to miss.

Xiaomi 11i HyperCharge 5G has a triple camera setup

Daylight photos taken with the Xiaomi 11i HyperCharge 5G were good. The phone was quick at accurately measuring light and locking focus, but it tended to increase sharpness and contrast in the final image. This caused a watercolor-like effect on objects in the shadows. The ultra-wide-angle camera offered a much wider field of view and photos looked good on the phone’s screen, but there was a noticeable drop in image quality compared to shots taken with the primary camera.

Close-up photos were sharp and the phone managed colors well. Subjects also had good separation from the background with a soft depth effect. Portrait mode photos had good edge detection and the phone allowed me to set the level of blur before taking a photo. Macros are captured at a resolution of just 2 megapixels, but I was able to get very close to the subject.

Low-light photos taken with nearby bright light sources turned out to be good, and distant objects were recognizable. However, the colors were out. With Night Mode enabled, the output had slightly better detail and color.

Selfies taken with the Xiaomi 11i HyperCharge 5G had good details and the portrait mode separated the subject from the background well. Low light selfies were average.

Video recording is up to 4K for the primary camera and 1080p for the selfie shooter. Stabilization was good during the day, but at night there was jitter in clips recorded while walking around. Overall, the cameras fared better in daylight compared to low-light conditions.

The Xiaomi 11i HyperCharge 5G has made headlines for its super-fast charging capabilities, and this is the biggest selling point of this smartphone. It seems unreal that the battery of a smartphone, even that of a relatively high capacity, can be completely filled in just 20 minutes. I think this will be very useful for people who travel often. The only catch here is that you have to carry the large 120W charger with you at all times.

The Xiaomi 11i HyperCharge 5G commands a premium for its 120W fast charging technology. It doesn’t have any direct competition yet, so if you’re willing to spend some money, go for it. If this feature doesn’t really matter to your use, you can instead check out the regular Xiaomi 11i 5G, which costs a lot less. It’s almost identical to the HyperCharge model, but instead supports 67W fast charging (which is still quite fast). The OnePlus Nord 2 (Review) and the Poco F3 GT (Review) are worth considering if you want more performance for the price.