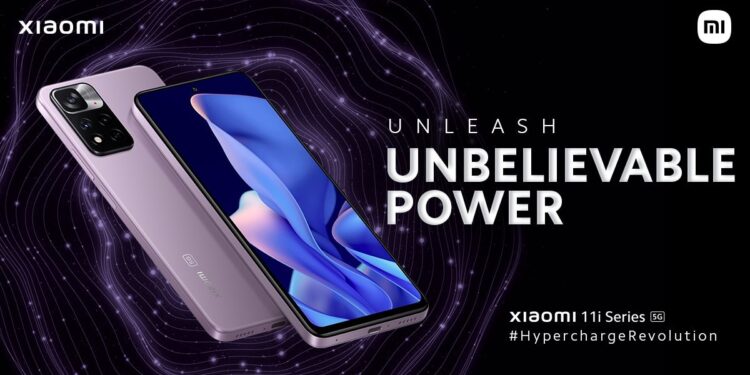 Xiaomi 11i HyperCharge 5G, Xiaomi 11i 5G price in India

As for availability, the Xiaomi 11i HyperCharge 5G and Xiaomi 11i 5G will go on sale in India from Wednesday, January 12. Both phones are available at Flipkart, Mi.com, Mi Home stores and offline retailers.

Launch offers on both Xiaomi 11i HyperCharge 5G and Xiaomi 11i include a Rs. 1,500 ‘New Year’ discount and up to Rs. 2,500 cashback on the use of SBI cards. Existing Redmi Note phone users will get an additional exchange discount of Rs. 4,000 instead of their phones.

In addition to the Xiaomi 11i series, Xiaomi introduced the 120W HyperCharge Adapter Combo – which comes with Xiaomi 11i HyperCharge 5G – which will also be sold separately for Rs. 3.999. The company says it will announce details about its availability at a later stage.

For photos and videos, the Xiaomi 11i HyperCharge 5G has a triple camera setup on the rear that houses a 108-megapixel primary Samsung HM2 sensor with an f/1.89 lens, along with an 8-megapixel ultra-wide shooter and a 2-megapixel macro shooter .

The Xiaomi 11i HyperCharge 5G also comes with a 16 megapixel selfie camera sensor on the front with an f/2.45 lens.

In terms of content storage, the Xiaomi 11i HyperCharge 5G offers standard 128GB UFS 2.2 storage that supports expansion via a microSD card (up to 1TB). Connectivity options include 5G, 4G LTE, Wi-Fi 6, Bluetooth v5.2, GPS/A-GPS, a USB Type-C port and a 3.5mm headphone jack. Onboard sensors include an accelerometer, an ambient light sensor, a gyroscope, a magnetometer and a proximity sensor. There is also a side-mounted fingerprint sensor.

The Xiaomi 11i HyperCharge 5G comes with dual speakers supported by Dolby Atmos and Hi-Res audio certification. The phone has a 4,500mAh dual-cell lithium polymer battery that supports fast charging up to 120W (compatible charger is included in the box). The battery is said to go from zero to 100 in just 15 minutes with the given charger.

Furthermore, the Xiaomi 11i HyperCharge 5G measures 163.65×76.19×8.34 mm and weighs 204 grams. The phone comes in a glass housing with IP53 certification for dust and water resistance.

The Xiaomi 11i 5G is identical to the Xiaomi 11i HyperCharge 5G in all respects, except for the battery. The regular model has a single cell 5,160 mAh battery that supports up to 67W charging. Xiaomi has bundled the supported charger with the phone. The extra battery capacity increases the weight of the Xiaomi 11i 5G to 207 grams.