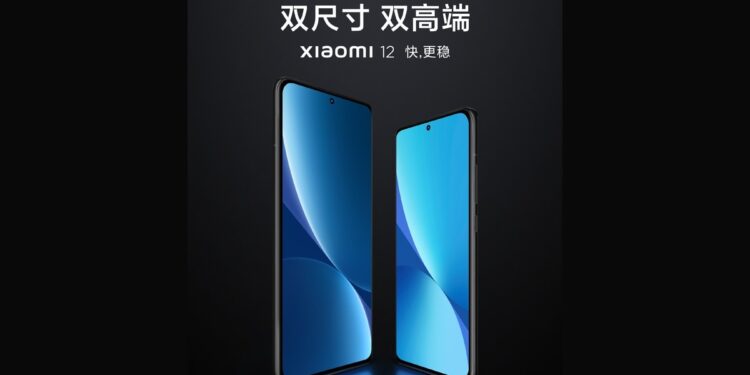 The Xiaomi 12 series has been confirmed to launch in China on December 28. Ahead of the launch, Xiaomi shared a teaser with an image of two of the smartphones in the upcoming flagship series. The image shows the design of Xiaomi 12 and Xiaomi 12 Pro. Separately, Xiaomi 12 Pro has been spotted on Geekbench’s benchmarking website, hinting at its key specs. It is said to be powered by the recently announced Snapdragon 8 Gen 1 SoC.

Xiaomi shared a teaser for its upcoming Xiaomi 12 series smartphones via a Weibo post. The image only shows the front of the smartphones and one side of each. Xiaomi 12 is shown with a small display, with the power button and volume rocker on the right back.

Xiaomi 12 Pro, on the other hand, has a larger screen and the left back is blank. It’s safe to assume that both smartphones will have identical frames and button placements. The selfie camera is housed in a centrally placed perforation cutout. The top and bottom of the two smartphones are not visible.

On Geekbench, Xiaomi 12 Pro scored a respectable 1,224 points and 3,823 points respectively in single- and multi-core tests. The Geekbench listing shows that the smartphone is powered by the Snapdragon 8 Gen 1 SoC – already confirmed as the powerhouse in Xiaomi 12 Pro. Furthermore, the Geekbench listing reveals that the upcoming flagship smartphone will get 12 GB of RAM. Android 12 is said to run out of the box with MIUI 13.