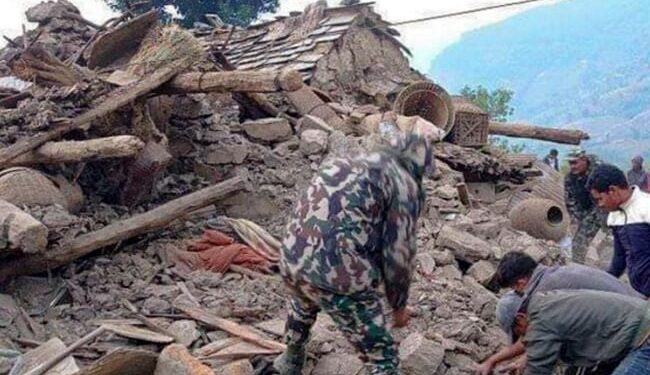 At least six people were killed when a powerful earthquake measuring 6.6 on the Richter scale shook the remote mountainous region of western Nepal on Wednesday, near where Prime Minister Sher Bahadur Deuba was campaigning for the upcoming elections.

According to the National Seismological Center, the earthquake struck at 2:12 am with its epicenter in Khaptad National Park in the Doti district of the earthquake-prone Himalayan country, damaging dozens of homes and causing panic among the sleeping people.

Six people were killed and eight others injured in the earthquake, Interior Ministry spokesman Phanindra Pokharel told PTI by phone.

He said the government has ordered the local government to immediately distribute relief supplies and compensation to the victims. The relatives of the dead will be Rs. 200,000 per head as compensation, he said.

The six injured have been admitted to the district hospital in Doti, while two others who suffered serious injuries were flown to the Seti Zonal hospital in Dhangadhi, according to interior ministry sources.

At least 10 houses were completely damaged by the earthquake, they said.

Nepalese army spokesman Narayan Silwal said three people were missing and believed to have been trapped in the collapse of houses in Purvichauki. The Nepalese army has started searching for the missing persons, he said.

Prime Minister Deuba who is in western Nepal for an election campaign is safe. He attended election rallies and met people in Dhangadhi district, 160 km south of the epicenter.

The quake was also felt in Dhangadhi, although Pokharel said the prime minister is safe.

Adjustments will be made regarding the prime minister’s election campaign in western Nepal, taking into account the incident, he added.

Nepal will hold elections for the federal parliament and provincial assemblies on November 20.

Deuba has ordered officials to immediately and appropriately treat the injured in the earthquake-affected areas.

“I pay tribute to the victims of the earthquake in Dadeldhura and my condolences to the bereaved,” Deuba tweeted.

“I also instruct the authorities involved to accelerate rescue and relief efforts and the treatment of those injured in the incident,” he added.

The Nepalese army and Nepalese police personnel have been mobilized to carry out rescue operations.

Deputy Superintendent of Police Bhola Bhatta, the acting chief of the district police station in Doti, said all the victims were killed by the rubble of the houses damaged in the earthquake.

The identity of the deceased has been established, including two women, two men and two minors, Bhatta said in the Himalayan Times newspaper.

The earthquake sent people in the mountain villages from their homes in panic, and many spent all night out in the open, officials said.

More than 200 aftershocks from the Doti earthquake were recorded as of 1:00 p.m. local time, Rajesh Sharma, an assistant technician at the seismology center, said Surkhet.

Images shared by the Nepalese army showed rescue operations by them to find the victims buried by the quake-damaged houses. Videos posted on social media show villagers moving rubble by hand and trying to retrieve their belongings.

A Nepalese army spokesman said the injured were rescued by a team of security personnel, including the Nepalese army, and taken by helicopter to Doti hospital.

They were rescued by helicopter from Dhangadhi in Surkhet and Kailali. Along with the rescue, according to the military, a team has been deployed to the area for those in urgent need of food and tents.

The tremors were also felt in neighboring Dhangadhi and Kailali districts. The earthquake that was mildly felt in Kathmandu and parts of India also damaged dozens of other homes in the district.

Earthquakes are common in mountainous Nepal.

On October 19, an earthquake measuring 5.9 on the Richter scale shook the Nepalese capital Kathmandu and neighboring areas, forcing many people to flee their homes for safety.

The earthquake was felt in Kathmandu Valley and neighboring districts. There were no reports of damage or casualties.

In April 2015, a devastating earthquake measuring 7.8 on the Richter scale shook Nepal, killing nearly 9,000 people and injuring nearly 22,000 others. It also damaged more than 800,000 homes and school buildings.

Bharat Jodo Yatra: Can it put Congress back on the political track?