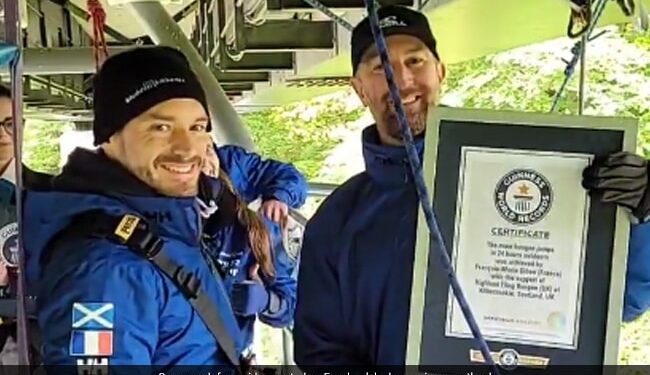 Francois-Marie Dibon planned over 5 years for the epic challenge and trained for months.

A man from France has set a new world record for most bungee jumps in 24 hours. Francois-Marie Dibon began his search at 10am on Tuesday and ended at 10am (Scottish time) on Wednesday at the Highland Fling Bungee platform at Garry Bridge in Perthshire.

According to the guardMr Dibon, 44, made 765 jumps in the said period, beating the previous record set by New Zealand’s Mike Heard, who made 430 jumps on the Auckland Harbor Bridge in 2017.

According to The Herald ScotlandMr. Dibon, 44, surpassed that record in just 12 hours, completing his 431st jump at 10:30 p.m. Tuesday.

“I used to have a fear of heights and bungee jumping is a really good cure. I thought it was worth facing your fears and conquering them. So I decided to put that statement to the test,” he told the BBC before embarking on the quest to break the world record.

Dibon added that it would be his “pleasure to bring the record to Scotland”.

He planned for the epic challenge for over five years and trained for months. His first bungee jump was 11 years ago.

“We all work together to ensure safety, count jumps, so it’s really a team effort,” he said.