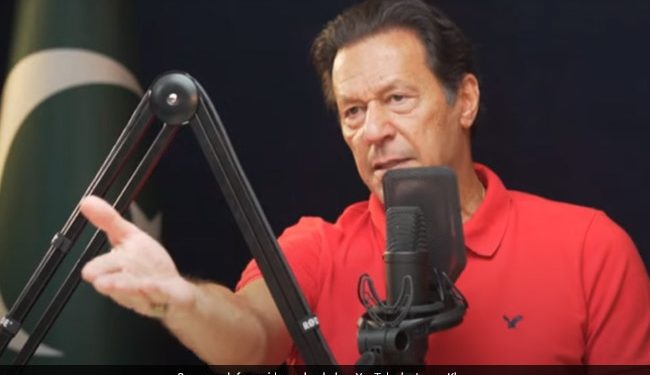 Imran Khan during the recording of the podcast.

Former Pakistani Prime Minister Imran Khan is in the news again, but for the wrong reason. Clips of his podcast recording describing his life in the UK have been circulating online, but one particular phrase has caught the attention of the internet.

“I was made very welcome in the UK, but I have never considered it my home. I was always a Pakistani first. An easel doesn’t turn into a zebra just because you paint stripes on it. A donkey remains a donkey,” Khan says in the now viral clip.

Watch the viral music video below:

It is part of a podcast with Pakistan-based content creator Junaid Akram. He moved from Dubai to Pakistan and also runs an Instagram account under the name ganjiswag.

Other content creators Muzammil Hassan and Talha were also part of the podcast.

The full video has been uploaded on Mr Khan’s official YouTube channel.

Khan was ousted as prime minister on April 10 by a vote of no confidence in the opposition National Assembly, becoming the first Pakistani prime minister to be deposed by parliament in the coup-prone country. The vote took place after midnight after days of drama.

The cricketer turned politician has repeatedly claimed that his political opponents colluded with the US to establish a regime in Pakistan. But he has provided no credible evidence for this, and Washington has strongly denied any foreign interference.

Khan has demanded early polls but the country’s election commission said it cannot hold a general election before May 2023.

Pakistan’s Tehreek-e-Insaf (PTI) chief has vowed to protest in the streets until elections are held.