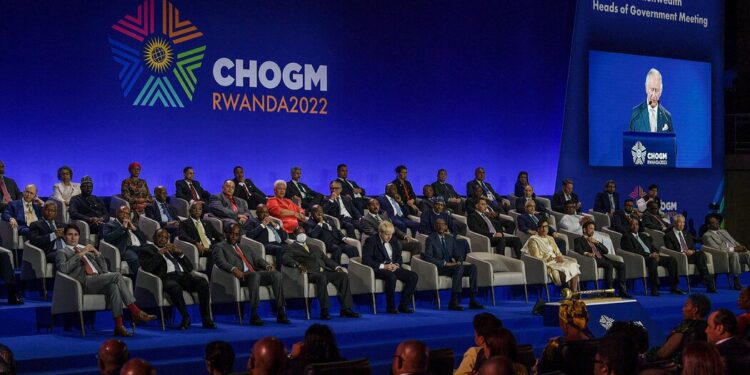 KIGALI, Rwanda — As Commonwealth leaders concluded a week of closed-door meetings, panel discussions and formal Saturday dinners in Rwanda, this “family of nations” was still at a crossroads, raising questions about its usefulness and whether it can reinvent itself for the 21st century.

Encompassing 56 countries across five continents and representing approximately 2.5 billion people, the Commonwealth was born from the dissolution of the British Empire, in hopes of promoting the shared values ​​of democracy and peace. But the Commonwealth is struggling to confront a legacy of colonialism at a time when the people of some member states, catalyzed by Black Lives Matter protests, are pushing for severing ties with the monarchy or pushing for apologies or reparations.

The summit in Rwanda’s capital, Kigali, took place as many countries forged deeper ties, not with each other or with Britain, but with other far-flung powers such as China, Russia, Turkey and the United Arab Emirates.

“The Commonwealth meetings were either disappointments or disasters,” said Philip Murphy, director of the Institute of Commonwealth Studies at the University of London.

The summit was postponed twice due to the coronavirus pandemic and came as many member states are suffering the severe effects of climate change and the war in Ukraine. In an era of changing economic conditions and mounting threats to peace, observers this week doubted leaders here could have paved a new path for the Commonwealth.

“There is no lack of hope and ambition invested in the Commonwealth,” said Mr Murphy, adding, “the trick is to make it achieve something, and I don’t see any aspect of that, not even this year.”

Many of the delegates meeting at the convention this week agreed that the Commonwealth, at least on paper, had clear principles. But putting them into practice has been elusive, especially as many of its member states faced democratic setbacks and some directly undermined press freedom.

This was especially true of the host country, Rwanda, where human rights groups say journalists and government critics have faced prison terms, disappearances or mysterious deaths. In 2009, when Rwanda applied to join the association, the independent Commonwealth Human Rights Initiative argued in a detailed report that the country did not meet the standards to join. But it was admitted anyway – one of the two countries, along with Mozambique, that had no direct ties to Britain.

Sneh Aurora, the director of the London office for the human rights group, which was at the summit this week, said that if the Commonwealth is to become a better and forward-looking institution, “it is time for the Commonwealth to speak.”

Experts said some former British colonies sought to join the Commonwealth, despite its allegiance to the Crown, because it affords them a measure of global legitimacy and tolerance for human rights violations, except when their actions are in extremis.

Still, Sithembile Mbete, a senior lecturer in political science at the University of Pretoria, said it was confusing that Britain favored Commonwealth cooperation when it cut aid to Africa and planned to deport asylum seekers to the continent.

“The Commonwealth is about maintaining the ultimate colonial institution as a supposedly democratic coalition of equals, when in practice it clearly isn’t,” she said. After parting ways with the European Union — its largest trading partner — Britain is looking to expand its influence, she said. “The Commonwealth is not a union of equals, but a field or stage where Britain can have more influence,” she said.

That influence has diminished in recent years, as many countries in the South have entered into new economic and political partnerships elsewhere.

This is especially true in Africa, where China has emerged as a financier and builder of infrastructure and a major source of imports and exports. Over the past decade, the decline in Africa’s share of British imports and the significant increase in trade with China “have reduced the UK’s influence over the continent,” said Cobus van Staden, co-presenter of the “China in Africa” ​​podcast.

In an effort to counter that, Britain’s Prime Minister Boris Johnson appointed a special envoy to the Horn of Africa this week, just days after China’s own envoy to the region called a meeting of seven countries to address wider instability in the region. address the region.

In the Caribbean, former British colonies have severed ties with the monarchy, such as Barbados, or expressed a desire to become republics, such as Jamaica. But the Commonwealth summit lacked any investigation into Britain’s colonial past and how that would affect the association’s future.

Given that the Imperial legacy is the thread that unites Commonwealth countries, it would make sense to tackle it, Mr Murphy said. Yet the Commonwealth is “never particularly eager” to do so, he said, in part because the British government has always been “very reluctant” to raise these issues.

“The last thing it wants to talk about is reparations, apologies or restitution,” he said. So “that particular Commonwealth potential remains untapped.”

The one exception came during Prince Charles’ speech at the opening ceremony, when he acknowledged what he called the “painful” roots of the Commonwealth.

“If we want to forge a common future that benefits all our citizens, we too must find new ways to recognize our past,” he said. “Very simple, this is a conversation whose time has come.”

The Prince of Wales, who also spoke about his recent trip to Canada where he met Indigenous communities at various reconciliation events, said keeping the Queen as head of state was “purely a matter for each member state to decide”.

But despite its shortcomings, the Commonwealth is attracting new members. The applications from Togo and Gabon, two former French colonies, have been approved, Rwandan President Paul Kagame announced on Saturday.

Also landing on Friday voted for reappointment Patricia Scotland, a Dominica-born British lawyer and diplomat, as Secretary-General. Mr. Kagame will take over from Mr. Johnson as chairman for the next two years. The next meeting of heads of government will be held in Samoa in 2024.

Some of the younger delegates at the summit said that despite everything, African countries could find a way to use the association to their advantage.

“Unlike before, we are now sitting at the table,” said Babala Hassan Atiku, a Ugandan who took part in the Commonwealth Youth Forum. “We just have to know what we want and go for it.”