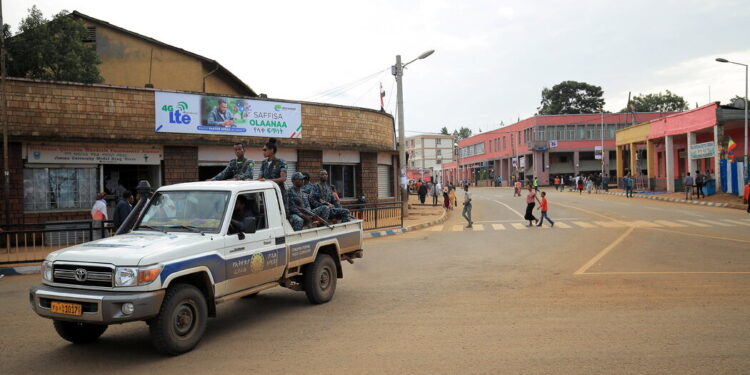 KIGALI, Rwanda — For decades, the village had been a refuge for the families, who worked the land and care for their flocks in Ethiopia’s largest region.

But by Monday, two days after gunmen attacked the ethnic Amhara residents of the village of Tole in Ethiopia’s Oromia region — possibly killing hundreds, injuring many others and destroying property — all sense of refuge was gone.

“We are not safe,” said Fikadu, a resident of the village who only gave his first name out of fear for his safety.

Fikadu fled the scene of the massacre to the nearby town of Gimbi, where he said dozens of injured people had been brought from the village to receive medical attention. He accused a banned militant group, the Oromo Liberation Army, of the attack.

There is no official confirmation of the number of victims yet, but witnesses and reports estimate it at 200 people or more.

Yilkal Kefale, president of the neighboring regional state of Amhara, also blamed the attack on the militants, known as the OLA, according to regional state media. And Daniel Bekele, head of the state-appointed Ethiopian Human Rights Commission, said the militants’ offensive on Saturday had resulted in “serious civilian casualties, injuries and material damage”.

But the OLA refused carry out the attack, instead attributing to a militia linked to the regional government in Oromia.

The attack was the latest in a series of ethnic attacks that have put a damper on Ethiopia, jeopardizing the long-term stability of the Horn of Africa, the regional status and the ability of its many ethnic groups to coexist in peace. be doubted.

The violence came nearly two years into the conflict in the northern region of Tigray, which was marked by the massacre of civilians, the destruction of schools and hospitals, and a mass exodus of refugees, including to neighboring Sudan.

The war has battered Ethiopia’s economy — once one of the fastest-growing in Africa — which has already struggled as large parts of the country remain in the throes of a record drought that has devastated farms and livestock.

The violence also underscores the task facing Prime Minister Abiy Ahmed as he seeks to centralize his authority in a country of 115 million people and dozens of ethnic groups with diverse and sometimes competing interests.

On Monday, Mr Abiy said in a: post on Twitter that the attacks on innocent civilians were “unacceptable”, adding: “Restoring peace and security in affected communities remains our top priority.”

But as ethnic violence proliferates, human rights groups have denounced the government’s communication failures in many areas, which have hampered its ability to report and investigate abuses.

Mr Abiy came to power in 2018 following protests against the government led by the Oromos, the country’s largest, albeit historically marginalized, ethnic group. But soon after, authorities began to crush their protests and arrested Oromo activists and leaders, some of whom had raised themselves as formidable opponents of Mr Abiy’s vision of a more centralized Ethiopia.

Many disgruntled Oromo nationalists felt increasingly shunned and turned to the Oromo Liberation Army and its rebellion against the federal government, said William Davison, a senior Ethiopia analyst with the International Crisis Group.

“This has meant that the insurgency has grown in strength, has more guns and more members,” said Mr Davison, “which has led to increased violence and more OLA control of territory in rural areas.”

Authorities have repeatedly tried to subdue the Oromo Liberation Army, but the group has fought back – and last week together with another rebel group carrying out attacks in the capital of the neighboring region of Gambella, while the OLA attacked two major cities in Oromia.

These operations, Mr Davison said, “were primarily intended to send a message to the government and others that the OLA has not been defeated and that it is a force to be reckoned with and ultimately negotiated.” .”

The political challenge in Oromia continues for Mr Abiy, who last week announced the creation of a commission to conduct peace negotiations with the Tigrayan leadership. Although the government declared a humanitarian ceasefire in March, Tigrayan officials and aid agencies say supplies are woefully inadequate to help the people in the region who are still cut off from telecommunications and banking services.

In an effort to expand his control over an increasingly intractable nation, Mr Abiy has also been dealing with the Amhara ethnic group in recent weeks.

Authorities have arrested thousands of journalists and activists in the Amhara region, along with members of the Fano militia, who were key ally in its struggle in the Tigray War. Early in the war, Amhara forces took over parts of western Tigray, claiming both Amharas and Tigrayans as their property.

The fertile area along the border with Sudan could become a pressure point during Mr Abiy’s negotiations with the Tigray.

As Ethiopia’s state of uncertainty grows, human rights activists say the lack of accountability for past abuses has left many communities in fear.

This is especially true for “Oromo and Amhara minority communities in Western Oromia, which are victims of widespread abuses by security forces and armed groups,” said Laetitia Bader, the director of the Horn of Africa at Human Rights Watch.

Fikadu, a resident of Tole village, said it was too late for the victims of the attack, but he hoped authorities would work to protect those still living.

“Many people died in this country, but no justice has been served,” he said.