All members of K-Pop Band BTS to serve in the military, their agency says 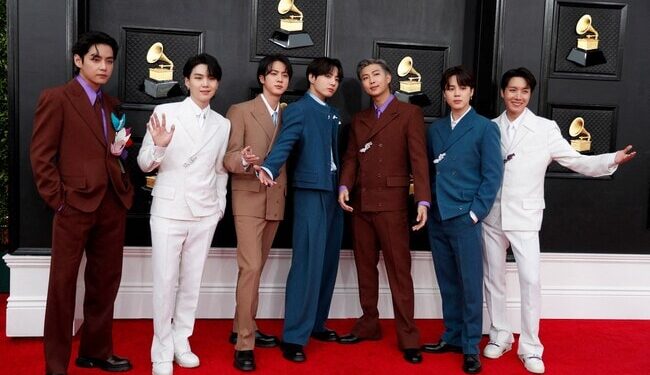 Some South Korean lawmakers had called for BTS to be exempt from military service.

Jin, 29, has postponed his service for as long as possible and faces the looming prospect of a full stint — nearly two years out of the public eye — when he turns 30 in December.

Since their debut in 2013, BTS has become a worldwide sensation with their upbeat hits and social campaigns aimed at empowering young people.

“Jin is canceling the request to defer enlistment at the end of October 2022 and is following the relevant Military Manpower Administration procedures for enlistment,” the management group of the seven-member band HYBE said in a regulatory filing.

All other members will also fulfill mandatory military service according to their respective plans, it added.

“Both the company and members of BTS look forward to reuniting as a group around 2025 following their service commitment,” HYBE-owned Bighit Music, which manages BTS, said in a separate statement.

All able-bodied men in South Korea between the ages of 18 and 28 must serve in the military for between 18 and 21 months as part of their defense against nuclear-armed North Korea.

However, some categories have been granted exemptions or served shorter terms, including medalists from the Olympics and Asian Games, and classical musicians and dancers who win top prizes in certain competitions. Some lawmakers had called for an exemption from BTS.

BTS announced a hiatus from group musical activities in June to pursue solo projects, raising questions about the band’s future.

They gathered on Saturday to perform a free concert in the city of Busan in support of South Korea’s bid to host the 2030 World’s Fair in the port city.