A caravan of migrants heads for the US border 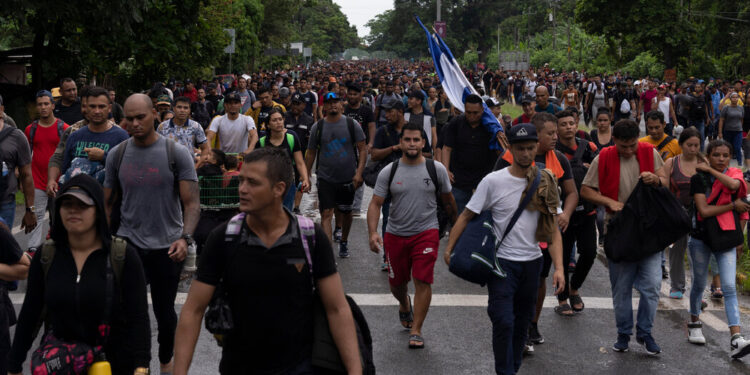 Thousands of migrants set out from southern Mexico last week in one of the largest caravans attempting to reach the United States in recent years. The mass movement coincided with a recent meeting in Los Angeles of leaders from the Western Hemisphere, which focused on migration.

Although migrant caravans have become a common sight and are usually broken up by authorities long before they reach the US southern border, the latest march of some 6,000 people walking along Mexican highways has attracted significant international attention.

Many of the migrants were from Venezuela and had traveled hundreds of miles through jungles and across multiple borders before arriving in Mexico. Once in Mexico, a migrant usually has to stay in the southern city of Tapachula until Mexican authorities grant a humanitarian visa to continue traveling, a process that can take months.

“Tapachula has become a gigantic migrant prison,” said Luis García Villagrán, a spokesman for the caravan. “The Mexican authorities have a knot, a bureaucratic fence, a bureaucratic wall, clearly under pressure from the United States.”

Rather than languish in Tapachula, some migrants are paying people smugglers, many of whom have ties to organized crime, or bribing immigration officials to speed up the process, García said in a telephone interview.

Still others are trying to bypass the Mexican visa process and join the groups moving north, he said, believing their sheer numbers will make it harder for Mexican authorities to hold back their progress.

A spokeswoman for the Mexican National Institute of Migration said efforts are underway to provide migrants in Tapachula with legal paperwork.

“Many of the members of the caravan already have documentation,” said spokeswoman Natalia Gómez Quintero.

Still, Mexico’s National Guard, as seen in the photo below, is often deployed to halt the flow of migrants north.

Last year, Mexico detained more than 300,000 migrants — the highest number ever recorded, according to Human Rights Watch, while more than 130,000 people applied for asylum in the country. Such numbers have “overwhelmed” Mexico’s asylum system, the report said.

The presence of many Venezuelans in the caravan follows a shift in Mexico’s policy towards migrants from the South American nation, which has been consumed by political and economic crises. Since January, Venezuelans have required a visa to enter Mexico, a rule many are trying to circumvent by crossing land borders in large groups rather than flying.

Downstairs, Rusbeli Martínez pushed a shopping cart next to her son and other relatives. After leaving Venezuela years ago, the family lived in Colombia, which is home to about 1.7 million Venezuelan migrants. But in Colombia, she said, they found a harsh reception and little work.

“We lived in a high crime area – they threatened us to leave,” Ms Martínez said. “Otherwise they would burn the house down.”

Many Venezuelans seeking a better life have taken a difficult overland route, including on foot the Darién Gap, a treacherous, roadless stretch of jungle in eastern Panama and northwestern Colombia. More than 32,000 migrants, including more than 16,000 Venezuelans, made the crossing in the first five months of the year, according to Panama’s National Migration Service.

Eduardo Colmenares Pérez, a Venezuelan migrant who crossed the gorge with his son and pregnant wife, said bandits had stolen all their belongings. “They left us without money, without food, without clothes, with nothing.”

Young men make up a large proportion of those in the caravan, but there are also many families with children. About 3,000 minors traveled in the group, according to the United Nations Children’s Fund† Downstairs, in a park in the city of Álvaro Obregón, a child played while other young people sang.

Most members of the caravan are poor and hope for better opportunities in the United States. But some are also fleeing violence and persecution, including a group of LGBTQ migrants who described the discrimination they faced in Venezuela and on the road.

Downstairs, Maiquel Tejada, Yeider Rodríguez and Jesús Rangel gathered during a pause in the caravan’s journey. “In Venezuela, and in the neighborhoods of Caracas, we are not accepted,” said Mr. Rodríguez, center. “We have to suppress ourselves, pretending to be something we’re not.”

Others said they were persecuted for being outsiders. Yuliet Mora and her family left Venezuela and moved to Colombia and later Peru. But she said they were forced to leave because of xenophobia. In the first photo below, Mrs. Mora is sitting under a makeshift tent in Álvaro Obregón.

Roselys Guetiérrez and María Gómez, in the second photo below, are Venezuelans who used to live in Colombia but left after saying they were attacked for holding hands on the streets of Bogotá.

Some migrants decided to leave the caravan after Mexican immigration officials in the town of Huixtla in Chiapas state gave them temporary permits that allowed them to travel freely across the country to the border for 30 days, said García, the caravan’s spokesman. Other migrants decided to abandon the caravan altogether, exhausted by a trek that usually means walking miles each day, often in blazing sun or torrential rain.

Mexico is fraught with danger, especially from organized crime groups known to kidnap and hold migrants for ransoms, often paid by relatives in the United States. The caravan provides some security in numbers, but Mexican authorities have been known to violently disperse caravans.

Below, Venezuelan migrants stood on the roof of an immigration detention center in Tapachula after an uprising that migrants say was caused by poor sanitation, lack of food, overcrowding and delays in migration and asylum processing.

“We are not criminals,” said a migrant, Valentina Alfonso, left in the second photo below. She said her uncle had been detained by Mexican authorities for several days. “We are professionals, we have our careers, our studies,” said Ms. Alfonso. “This is inhumane.”

With temperatures reaching up to 100 degrees, the caravan usually leaves long before sunrise. Downstairs, a Venezuelan migrant pushed another migrant in a wheelchair as the caravan traveled through the night.

Mr. Colmenares, who was in Mexico for five days after crossing the Darién Gap, often had to rely on the generosity of fellow migrants for food.

“I feel furious, powerless, because I had to leave my country,” he said.

Despite the hardships, Mr. Colmares that he only thought of the road ahead. “What motivates me to keep running is to search for my American dream,” he said. “To give my son a better future.”