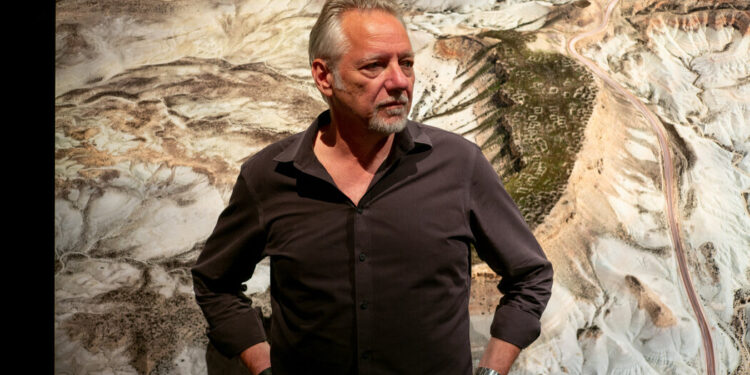 Long before the climate crisis, Canadian photographer Edward Burtynsky was at the center of attention, traveling the world to document what people have done to the environment and, in turn, to themselves.

His work has always been monumental, both in subject matter and approach. For most of his four-decade long career, Mr. Burtynsky went to the largest examples of what he wanted to document, such as open mines, and photographed them with cameras that made 4 by 5 or 8 by 10 inches. negatives, which he printed extensively.

He has been involved in digital photography for a long time and he is also exploring new ways of presenting his work beyond in books and as prints. His most recent project has gone from too big to huge.

“In The Wake of Progress” takes 40 years of Mr. Burtynsky, including some video projects, and combines them with a powerful, emotional soundtrack composed by Phil Strong to create a multimedia experience. Anyone who has visited Expo 67 will likely be reminded of The National Film Board of Canada’s “Labyrinth.”

It debuted on an extreme scale. For the Luminato Festival in Toronto, Mr. Burtynsky takes over the 22 screens that normally illuminate Toronto’s Dundas Square with multi-storey advertising. He’s followed that up with a three-screen version, with each screen about 10 feet high. “In The Wake of Progress” recently closed in Toronto and is coming to Montreal this fall.

The sheer size of the projections brings dramatic changes to even Burtynsky’s most famous works. The factory workers who appear as rows of people in prints or books become individuals, and details come to the fore.

I spoke to Mr. Burtynsky shortly before the smaller, but still very large, Toronto show closed. The highlights of our conversation have been edited for clarity and length:

When you were presented with the Dundas Square screens, was the idea immediately appealing?

I thought, wouldn’t it be interesting to have some kind of arc of my entire career and start that and support it a little bit with nature, to say we come from nature? And so it starts with an old vegetation, primeval forest and ends with that same forest.

It was also a way of referring to the fact that the square was a forest in the not-so-distant past.

A lot of public art, in my opinion, has no direct connection. So I wanted the idea of ​​someone leaving Nordstrom’s with their shopping bag and then suddenly being dragged into a roller coaster ride.

Why did you start photographing the effect of humans on the planet?

I started photography at Ryerson and my freshman assignment was: Go out and find evidence of man. Then I started thinking about how ruins are this evidence of the lives of people passing by.

I grew up in St. Catharines where all these leftover bits of the Welland Canal are – the canal went through four different routes through time. I mapped out all the different routes, I cycled them all and then I started photographing these remnants.

It suited the way I like to think. It was like they gave me a ticket to be an alien. It was as if I had to come to this planet to report to another intelligence about what we are doing with the planet. I would show this other how we change the planet, how we deforestation and how we turn it into farmland, how we extract metals from the earth, how we use the water, how we use technology.

Our land of plenty will eventually become a land of scarcity because all the easy things will be plucked and the land will run out.

What stands out about your work is how it reveals the ability humans have to build things on an inhumane scale.

I always call that the contemporary sublime. It used to be sublime, if you look at the romantics, nature. It was the stormy winds, the storm at sea. And we are dwarfed by his presence and we are overwhelmed and in awe of it.

The contemporary sublime is our technological revolution where we have dwarfed ourselves with our own creations. We’re little trucks in this big open mine. We make these 400 ton machines that can move tons of material in one bucket.

I look for landscapes that feel like they come from alien worlds, yet they are the world we created. These things have this surreal quality to them and scale to them. There is no reason for us who live in cities to go and see these places. So I’m witnessing in a way and bringing these things back to consider.