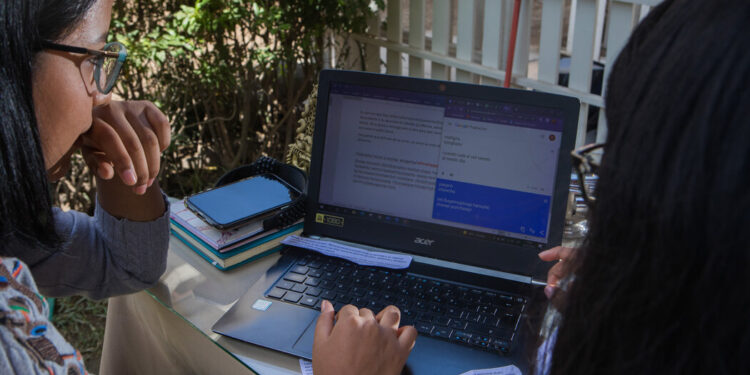 LIMA — When Irma Alvarez Coscco heard that the language she’s spoken all her life, Quechua, had been added to Google Translate, she rushed to her computer to try it out.

“I said, ‘This is it. The day has finally come,” recalled Ms. Alvarez Ccoscco, poet, teacher and digital activist, in a telephone interview. She started with some basic sentences. “I didn’t want to be disappointed,” she said. “And yes, it worked.”

It was more than a new means of communication; it was a justification that Quechua and its millions of speakers in South America deserved more voice and visibility, Ms. Alvarez Ccoscco said.

She and other Quechua activists have been making that argument for years. After all, Quechua is one of the most widely spoken indigenous languages ​​in the Americas. But now, “a company as big as Google says so,” she said. “It’s like saying to the world, ‘Look, here we are!'”

Quechua — or more accurately Southern Quechua, the main language in the Quechua language family — was one of 24 languages ​​that Google added to its translation service this month. Collectively, they are spoken by about 300 million people. Many, like Quechua, are mostly oral languages ​​that have long been marginalized, spoken by indigenous or minority groups.

Google said the goal was to include languages ​​that are underrepresented in technology to “connect communities around the world.”

The tool can also help health professionals, teachers, government officials, police officers and others connect with speakers in their own communities.

“In the Andes, there is a lack of bilingual professionals in very critical areas,” says Dr. Américo Mendoza-Mori, a Quechua-speaking scholar at Harvard University who studies indigenous and linguistic identity. “There are millions of speakers who need to be served and treated as citizens of their own country.”

Eliana Cancha, a 26-year-old Peruvian nurse, said only two in 10 health professionals speak the Quechua language widely used in the region where she works, forcing many patients to try to explain what ails them by going to parts to point. of their body.

“They can’t express themselves at the doctor the way they should,” said Ms. Cancha, a native Quechua speaker. “That means they’re not getting proper treatment.”

Quechua originated more than 1,500 years ago among farmers and pastoralists in the central Andes of Peru. By the fifth century it had grown into two main groups, with even more variants, and by the 15th century the Incas adopted one of them as the lingua franca of their vast empire, which stretched from Colombia to Argentina.

Today, Quechua languages ​​are estimated to be spoken by some 8 million to 10 million people in South America – mainly in Peru, Bolivia and Ecuador. Southern Quéchua is by far the most widely spoken, with as many as seven million speakers.

Until recently, Google Translate’s machine learning system had to see translations of a language into other languages ​​it knows to master, said Isaac Caswell, a research scientist at Google Translate. But the tool now has so much experience that it can learn to translate a new language with little more than the text in that language.

Mr. Caswell likened the learning process to a polyglot locked in a room with nothing but a stack of books in a new language; if given enough time, the polyglot could figure it out.

Underrepresented languages ​​like Quechua have a growing online presence, which is why Google’s translation model has learned the language by clearing the public web for text written in that language.

“As more communities come online, it’s more possible to do things like this,” said Mr. Caswell.

Lingala, a Central African language, has also just been added to Google Translate, although it is spoken by some 45 million people. European languages ​​such as Swedish, Finnish or Catalan with a much smaller number of native speakers have been using the translation tool for years, mainly because they are overrepresented in online text, Mr Caswell said.

“People are celebrating,” said Maryk Francq Mavie Amonga, production assistant for the multilingual news service Africanews and native speaker of Lingala. “There are a lot of places that don’t know us yet.”

Just over a decade ago, Quechua was barely on the internet, said Ms. Alvarez Ccoscco, the activist.

But she and other Quechua language activists have been busy digitizing dictionaries, adapting open source software to Quechua, writing Quechua-language blogs and e-magazines, and offering Quechua versions of everything from colonial screeds and short stories to video games.

“Google is really joining this existing ecosystem of digital efforts to make sure the language is there,” said Dr. Mendoza-Mori, the Harvard scientist.

He said there has been a growing movement in the Quechua-speaking community in recent years that has embraced the language and challenged the stereotypes that portray the language as a relic of the past or a cultural curiosity.

Yeni Erazo, 24, a health administrator in Lima, said that while her family raised her to be proud of speaking Quechua, she was bullied for speaking it in elementary school. Even at the prestigious university she attended, she said, “people would look at me funny.”

But she found a group of native Quechua speakers who not only spoke Quechua, but also liked to speak loudly, as she did. Together they created a digital magazine in Quechua focused on cultural identity, with 11 editions to date, and now she is working on a series of TikTok videos to promote more Quechua discussion on social media.

“When I speak in Quechua, I feel like myself,” she said. “Why shouldn’t I be proud of it?”

After the Spanish conquest of the Inca Empire in 1532, Quechua was seen by the new ruling class as a sign of backwardness or a source of suspicion. Its use was officially banned after the indigenous leader Túpac Amaru II led a revolt that swept the southern Andes in the late 18th century, ending with his public torture, mutilation and beheading.

Even so, Quechua speakers still made up a majority of the Peruvian population in the early 20th century.

But in 2017, the percentage of Peruvians who identified Quechua as their first language was just 14 percent.

As Quechua speakers migrated from the Andean highlands to cities – some in search of opportunity, others uprooted by conflict – the language was not passed on to new generations.

In the †80s and †In the 1990s, bloody fighting between leftist insurgents and state security forces decimated Quechua-speaking villages, leaving so many tortured bodies and mass graves that the families of “the disappeared” still collect their remains today.

In Lima, where many fled to escape, “you couldn’t speak Quechua openly because you would be considered a communist, a terrorist,” said Ricardo Flores, a Quechua rapper, historian and teacher who grew up part of San Juan de Lurigancho. , a neighborhood in the capital with a high concentration of Quechua speakers.

Mr Flores said that even today, “guys in markets and parks, they pretend they don’t speak it.”

There’s such a stigma about Quechua that it’s not clear whether the language is growing or declining, Mendoza-Mori said. Although Peru’s last census recorded an increase in the number of speakers of the language, it may only be because more people are willing to acknowledge they speak it, he said.

Even as Quechua speakers celebrated its inclusion on Google Translate, a law professor at a prominent university in Lima made headlines for asking why it was still spoken, praising French, German, and Italian as languages ​​of culture and science.

Other important steps have been taken. In 2016, the Peruvian state media channel TVPerú added a Quechua-language news programming to its daily programming. In 2019, a PhD student, Roxana Quispe Collantes, wrote and defended the first dissertation in Quechua in Peru.

Of all the translations of Quechua that Ms. Alvarez Ccoscco tried, she said that one in particular filled her with pride: “Musqusqaykimanta astawan karutaraq chayasaqku.”

It was a line written by Peruvian writer José María Arguedas in a poem dedicated to Túpac Amaru II, which she said Google had more or less correctly translated to: “We’re getting further than you ever dreamed.”