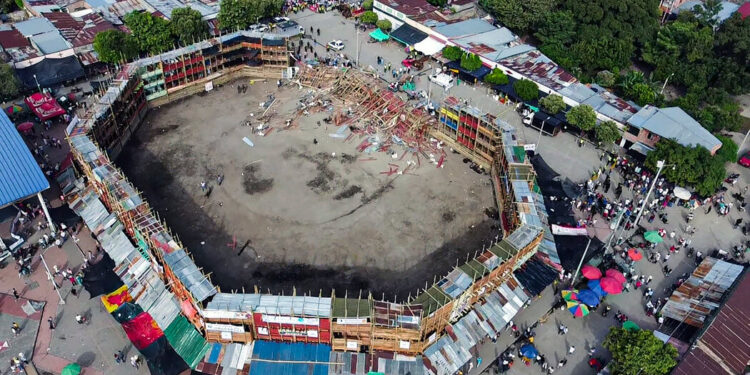 BOGOTÁ, Colombia – At least six people were killed and more than a hundred injured on Sunday when wooden spectator stands at a bullfighting festival collapsed, leaving people fleeing for their safety.

The collapse occurred in El Espinal, a town of 75,000 inhabitants, about 95 miles southwest of the capital, Bogotá, on a corraleja† a festival where the public is invited to involve, even ride or taunt the bulls. It is more informal than the traditional Spanish bullfight and the bull is not killed in the end.

Among the dead on Sunday was a 1-year-old child, according to local media, who also reported that the bull had escaped and was running loose in the street.

A councilor called on nearby hospitals and ambulance services, but El Espinal’s was soon overwhelmed.

Colombia’s president-elect Gustavo Petro expressed his condolences on Sunday afternoon, noting that his country had experienced similar disasters before. In 1980, spectator stands in the northern town of Sincelejo collapsed, killing hundreds. Overcrowding and poor construction were later blamed.

“This has happened before, in Sincelejo,” Mr. Petroc said on Twitter† “I ask the mayor not to allow any more spectacle in the death of people or animals.”

The practice has faced many legal challenges over the years and has been banned intermittently in parts of the country due to concerns about animal cruelty and danger to onlookers.

In 1989, bleachers collapsed in Honda, a town outside Bogotá, killing eight and injuring 200. In 2006, dozens of people were injured in a similar incident in a town not far from El Espinal. And in 2013, a bull attacked onlookers in the northern city of Arjona, killing two men.

Petro banned the practice in Bogotá when he was mayor in 2012, but the issue has since been left in legal uncertainty by the country’s constitutional court.

“We will ask for an investigation of the facts, a speedy recovery of the injured and solidarity with the families of the victims,” ​​he said.