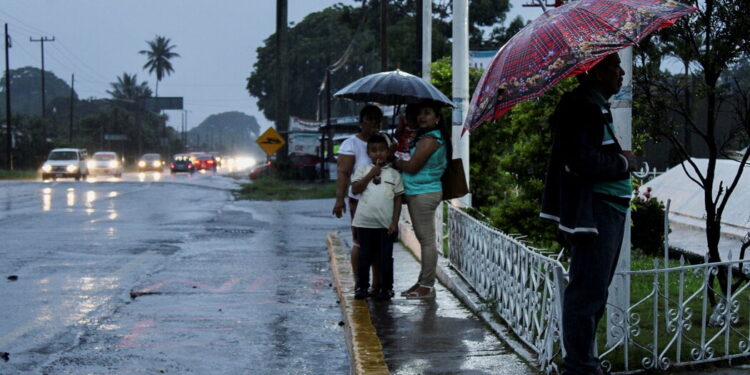 Hurricane Agatha, the first named storm of the year in the eastern Pacific, made landfall late Monday in southern Mexico, causing life-threatening winds up to nearly 105 miles per hour and heavy rainfall that could trigger mudslides and flooding.

The storm’s winds made it a Category 2 storm, the kind of weather that can tear roofs off well-built homes, uproot trees and cause major power losses.

Agatha was the first Category 2 to ever make landfall in the eastern Pacific Ocean, said Dan Pydynowski, senior meteorologist at AccuWeather. “It will be the strongest ever,” he said.

The storm made landfall just west of Puerto Angel, a small fishing village in the Mexican state of Oaxaca. Nearby, the seaside town of Zipolite has become an increasingly popular tourist destination, particularly for the LGBTQ community.

Heavy rain was expected until Tuesday, as the storm moved to the northeast.

Before Agatha, only two Category 1 hurricanes had made landfall in the region: Hurricane Barbara on May 29, 2013, and, coincidentally, Hurricane Agatha on May 24, 1971, Mr. Pydynowski said.

Home to surfing hotspots, the Oaxaca coast has long attracted tourists from all over the world who are drawn to the golden sands and laid-back vibe of the Pacific Ocean.

Industry has been a major driver of the state’s economy. In 2019, before the pandemic decimated tourism in the region, more than 200,000 foreign tourists traveled to the state of Oaxaca, largely visiting the colonial capital of Oaxaca. But more than 80,000 foreigners also chose the beaches of Huatulco and Puerto Escondido.

Given the importance of tourism to Oaxaca, the arrival of a potentially devastating storm could prove catastrophic for the more than half a million people who call the coastal region home.

Alejandro Murat Hinojosa, governor of Oaxaca, said the country’s national defense forces, military, Mexican National Guard and navy had been deployed to respond to the hurricane.

Lessons along the coast were canceled Monday and Tuesday, he said.

State and federal authorities coordinated with the municipalities most affected by the hurricane, Hinojosa said in a video on Twitter last weekend.

“As your governor, I will be observant and provide you with information on how this storm is developing so that you can continue to take the precautions you need to protect yourself and your family,” he said.

Footage shared on social media Monday morning showed residents of the Oaxaca coast preparing for the worst, including: boarding buildings. Videos showed the wind starting to pick up, tossing palm trees back and forth as the waves pounded with increasing ferocity.

Before the storm, the head of the Huatulco Hotel and Motel Association, Pia Overholzer, said the city had an occupancy rate of about 60 percent with some 3,500 tourists.

Julián Herrera Velarde, representative of Oaxaca’s Department of Tourism in Puerto Escondido, said the city had some 2,700 visitors, only 40 of whom had been transferred to temporary shelters.

While not as prone to hurricanes as the Caribbean, Mexico’s Pacific coast is no stranger to deadly storms. In 1997, Hurricane Pauline swept the coasts of Oaxaca and neighboring Guerrero, killing more than 200 people and leaving some 300,000 homeless.

More recently, in 2017, Tropical Storm Beatriz wreaked havoc in the state, leading to widespread flooding and mudslides. At least two people were killed and hundreds of families saw their homes damaged.

Dennis Feltgen, a meteorologist and spokesperson for the Hurricane Center, said Saturday that if the storm “survives its passage through Mexico, its remnants could surface in the Gulf of Mexico.”

Agatha formed off the Mexican coast and was called on Saturdaynot long after the official start of the Eastern Pacific hurricane season, which runs from May 15 to November 30.

The Atlantic hurricane season — the term used for storms that form in the Gulf of Mexico, the Caribbean Sea, and the Atlantic Ocean — runs from June 1 to November 30. Those regions are responsible for the worst hurricanes to hit the United States. said Feltgen.

This year is on track to be the first since 2014 that no hurricane has formed in the Atlantic before the official start of the season. However, the season generally doesn’t peak until mid-August through the end of October, and forecasters predict above-average Atlantic activity this year, with six to 10 hurricanes and three to six major hurricanes, the National Oceanic and Atmospheric Administration said last week.

If the forecast comes true, this year will be the seventh consecutive above-average hurricane season.

The causes for the predicted intensity of hurricanes cited by NOAA include the climate pattern known as La Niña, which affects wind speed and direction, and a particularly intense West African monsoon season, which produces waves that can lead to powerful and prolonged hurricanes.