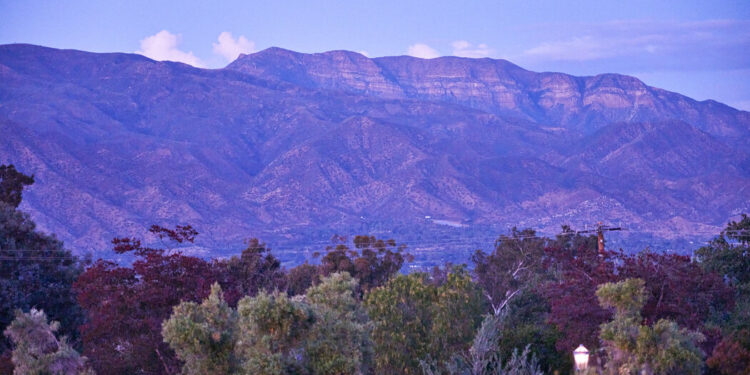 “But what about the pink moment?”

Despite a poolside mezcal margarita, I could hear the panic in my voice as I reminded my sisters-in-law of a unique Ojai phenomenon. We’d only had 36 hours in this small, leafy town nestled in the mountains of California’s Ventura County, and we’d miss our one chance to bask in the pink moment—the fleeting few seconds when the setting sun illuminates the Ojai Valley in an otherworldly shade of dusty rose. I had booked a room for us at the Ojai Valley Inn, in part so that we could park under the resort’s 200-year-old oak tree and have an unobstructed view of Chief Peak, part of the Topatopa Mountains, known as the right conditions, to let a transcendent coral hue shine.

There was only one problem: 36 hours is not nearly enough to experience all that Ojai – charmingly pronounced “Oh, hi” – has to offer. To get the most out of our trip, about 80 miles from our homes in Los Angeles, we had to combine a number of activities, make compromises, and accept that the most rewarding destinations are always longing for more.

I should know that Ojai is exactly this kind of place: Since moving to Los Angeles in 2015, I’ve been there seven times and every time I discover something new. My inaugural visit to Ojai, in 2017, will be forever remembered for the 50 minute “enlightenment session” I did with Nicola Fiona Behrman, the then “resident energy alchemist” of the Ojai Valley Inn who tried my “body and soul.” to infuse with nourishing light”. ‘ by drawing circles around me with a smoldering bunch of sage.

When I told Ms. Behrman that I was concerned about a novel I had started writing, but kept putting off, she sprinkled me with a homemade “mist of inspiration” and told me to use it whenever I bumped into a wall. Was I skeptical? Naturally. Did the bottle collect dust on my desk? It did. But that novel, The Goddess Effect, in which Ojai plays a prominent role, is finally out in October. (While Ms. Behrman’s enlightenment session is no longer offered, Katie Manzella, a Reiki master, and Nancy Furst, a spiritual therapist, offer similar treatments, starting at $260.)

If this all sounds too vague, know that Ojai has embraced alternative ways of healing and living since the beginning. Established by the native Chumash about 5,000 years ago, the city’s name is derived from the Chumash word for “moon.” The valley’s atypical orientation, east-west rather than north-south, is said to make it an electromagnetic vortex of good energy. The philosopher and meditation evangelist Jiddu Krishnamurti lived in Ojai from 1922 to 1986. His foundation regularly organizes workshops and welcomes visitors; in the city there are plenty of opportunities to practice yoga and meditate. Downtown, the Crystal Corner sells slabs of amethyst ($600) and pocket-sized nuggets of pink tourmaline ($12). Sanctum sells stacks of “wisdom cards” based on the Bhagavad Gita, the Hindu sacred scriptures ($16.95).

That said, Ojai also offers a variety of other types of “healing” including food, drinks and therapies from the spa and shopping beliefs, which is why I found myself stressed from the moment we got in the car about how we could have enough time. would have to do everything. On the program: lunch, a wine tasting, a visit to Bart’s Books, the world’s largest outdoor bookstore, a dip in the pool, a four-course dinner, a walk, two facials, a massage and of course the pink moment.

“We can do whatever‘ said Ritu, as we turned off the Ojai Freeway and entered a country lane lined with orange groves. “Ojai is actually heaven.”

Hunger claimed we eat before checking into the hotel. We arrived at Ojai Rotie, a downtown French-Lebanese patio restaurant 15 minutes before it opened, Type A personalities blazing. There was already a line, thanks to Ojai Rotie’s supreme salad cravings (get the purslane tabbouleh, $10) Lebanese-inspired dips (the muhammara and roasted eggplant especially earn the chef’s kiss emoji, $16 each or three for $28 ), za’atar-dusted flatbread ($7, it comes with the spread of dips), and rotisserie chicken ($16 and up). “Dessert here or shall we walk?” asked Nicolette. We chose to leave the car in its free parking lot and wander down the street to Ojai Ice Cream.

Until: “Oooh wait, can we stop here for a minute?”

I don’t know who said it first because over the next two hours we all did. Ojai is a vacationer’s paradise. On one side of Ojai Avenue: Fig Curated Living, a treasure trove of homewares such as earthen mugs decorated with iconic texts (“I will survival,” $24), Ali Golden, a trendy women’s clothing store, and Tala Design, another store for homewares where Nicole convinced me to buy a smoked glass candle holder I didn’t know I needed ($80). The real damage was done at Danski Ojai, where dresses fanned out from tightly packed racks. “The owner selects everything from designers around the world,” said Rosemary, the sales associate behind the registry. “That Dress,” the Kandinsky-esque song I was looking for, “is from Japan. It’s made from recycled plastic bottles.”

She had me in Japan. “I can’t believe I didn’t know any of these places,” I told Ritu and Nicole as we walked back to the car, laden with purchases and discarded ice cream. On previous visits I’d been fixated on other attractions such as drinking wine at Tipple & Ramble, a wine bar and market off Ojai Avenue, getting an excellent table at Nocciola, an Italian restaurant in a craftsman style house, and trawling at the Sunday Farmer’s Market , where, when in season, local pixie tangerines and avocados reign supreme.

During this trip we discovered a divine dish of mussels and spaghetti at Olivella, the luxurious Italian restaurant of the Ojai Valley Inn (tasting menus start at $95 for three courses), wine tasting with a BYO food policy, which happened when we merged lunch (takeaway salads , $17, from the Nest) with a wine flight at the Ojai Vineyard, a light-filled hangout across the street. We found that the roughly a mile walk between the Ojai Valley Inn and downtown can be just as grueling as walking the Shelf Road trail, especially if you’re carrying bags full of used books. We’ve found places to try next: Pinyon, a wood-fired pizzeria and natural wine shop that opened last fall, and Rory’s Place, a farm-to-table restaurant that opened in January.

Before heading back to Los Angeles, we had dinner at another new restaurant, the Dutches, which specializes in Burmese and Indian dishes. Open in January, it extends over three airy rooms and a large patio in the back. “This place looks like an embassy in Bali,” Ritu said, running his hand over a cane-backed chair. After scooping forks full of Crispy Rice Salad ($18) and Lamb Biryani in Puff Pastry ($31), we hopped into Nicole’s car for the drive back to Los Angeles. We planned to leave before dark; the day got the better of us.

“Look,” Nicole said, catching my eye in the rearview mirror. “The pink moment is behind you.” I turned around; swaths of salmon streaked the darkening sky. The glow carried for miles.