Scenes from the polls as Rodolfo Hernández and Gustavo Petro cast their votes. 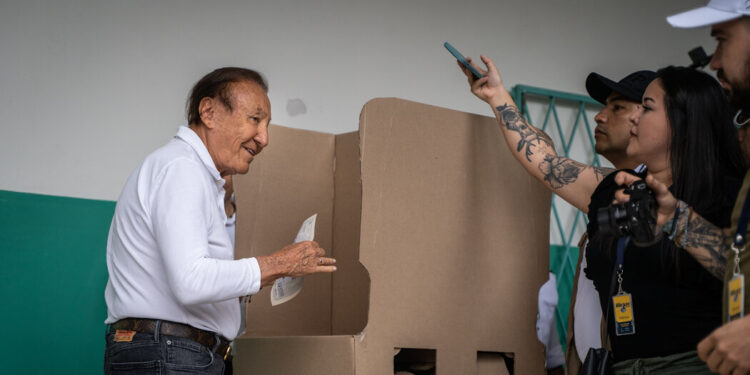 Rodolfo Hernández, a construction magnate and former mayor who emerged as a surprise candidate in Colombia’s presidential election, has been largely absent from public life in recent weeks.

He has refused to attend debates and held no gatherings, preferring live streams curated by his social media team.

But on Sunday, as polling stations opened, Mr. Hernández got out of a white car in Bucaramanga, his hometown, surrounded by bodyguards, and into a roaring crowd of voters.

“Long live Rodolfo!” supporters shouted, many scrambling to catch a glimpse of the candidate as he walked into his polling station.

Mr. Hernández pushed his way through the pack with a wide grin. His opponent, Gustavo Petro, a longtime senator and former rebel aspiring to become the country’s first leftist president, cast his vote more than 250 miles south, in Bogotá’s capital.

In Bucaramanga, the mid-sized city where Mr. Hernández built his fortune and once served as mayor, his candidacy has created political fervor and deep regional pride among voters who say they believe he represents them.

Carlos Gamboa, 42, businessman, was one of the voters waiting in line when Mr Hernández arrived to vote.

“Most of us are with Rodolfo,” he said, adding that he didn’t trust Mr. Petro, in part because of the candidate’s time as a member of the insurgent group M-19.

Hernández has walked on an anti-corruption platform despite being indicted on corruption charges, accused of forcing subordinates to award a city contract to a particular company, a deal that could have benefited his son .

He has said he is innocent.

In the polls in Bucaramanga, many voters did not seem bothered by the accusation.

“No one who will come to power here is clean,” said Gilma Beserra, 58, “but Rodolfo is the least corrupt.”

On Sunday morning in Bogotá, Adriana Martínez, 24, was already queuing for a secondary school in the working-class neighborhood of El Sosiego.

She had just finished the night shift as a health administration officer and had gone straight to the polling station by bus.

Ms. Martínez said she supported Mr Petro and that the decision was particularly influenced by his choice of Francia Márquez as vice president, who could become the country’s first female black vice president.

Márquez is an environmental activist who has risen from poverty to a national phenomenon, speaking during the campaign about race, class and gender in a direct way that is rarely heard in the highest echelons of Colombian politics.

“She’s a person who comes from where we come from,” said Ms. Martínez, “she had to fight to get where she is.”

Ms Martínez said she gave little weight to the argument that Mr Petro’s policies would result in the same kind of economic, humanitarian and democratic crisis that has occurred in Venezuela.

In Colombia “you don’t have enough money to buy a potato. In that sense, we are already in extreme poverty,” she said.

Her own family calls her the “Little Rebel” because of her support for Mr. Petro, who she said prefers because of his policies on education and income inequality.

“The youth is more inclined to revolution,” she said, “to the left, to change.”