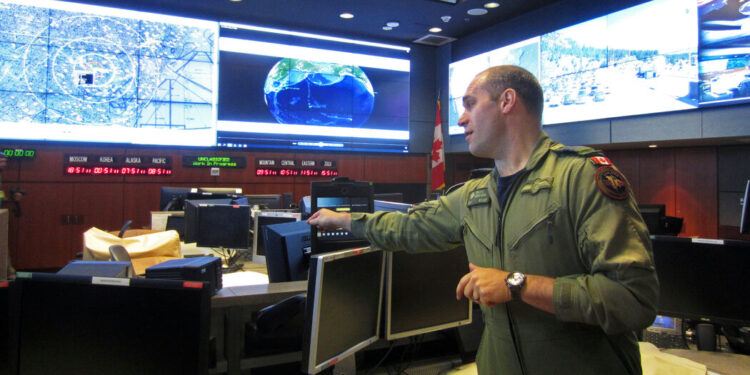 Spending on military programs often leads to years of heated political debate and little action in Canada. But the announcement this week that Canada will spend nearly $5 billion over the next six years upgrading Norad’s defense systems passed with hardly any controversy.

Norad, or the North American Aerospace Defense Command, is a Cold War creation that began in 1958. The only joint operation of the Canadian and United States armed forces, it was first set up to destroy incoming bombers with nuclear weapons from the Soviet Union and to provide air support to defend the two countries.

In the popular imagination, Norad was a high-tech operation that has starred in film and in Canada’s Christmas celebrations. The movie “Dr. Strangelove” featured fictional Norad data from the far north of Canada and Alaska populating a “big sign” tracking Soviet bombers.

And on Christmas Eve, Norad is the outfit that follows Santa’s movements and reports on them via broadcasters and online.

Norad’s systems, last overhauled 40 years ago, have fallen behind technologically and need to be thoroughly modernized, defense policy analysts have long said. Since the Russian invasion of Ukraine, those calls have become more urgent.

The current system cannot detect cruise missiles and would not detect hypersonic missiles until it was too late to be useful. The new category of missiles has sparked a war of arms and there is currently no effective countermeasure.

Russia claimed to have used a hypersonic missile early on during its invasion of Ukraine. Such missiles are generally defined as missiles that travel at least five times the speed of sound and can aim with pinpoint accuracy. Even without a warhead, they will hit targets with a force equivalent to five to ten tons of explosives. If that’s not enough, they can carry nuclear warheads. It is generally the intention of the countries developing them that they would be fired from ships, submarines or aircraft and reach their targets in 15 minutes or less.

“Death from the sky, on-time delivery guaranteed,” Steven Simon, an analyst with the Quincy Institute, a Washington foreign policy research group, and a professor of international relations at Colby College, described hypersonics in an op-ed for The Times.

By the time Norad’s current systems discovered such fast and powerful missiles, it would be far too late to do anything about it. Expenses announced this week by Defense Secretary Anita Anand include money for new types of sensors that can “see” over the horizon to give decision-makers more time to make assessments.

But even if those sensors can track the entire flight of a hypersonic missile, R. Jeffrey Smith, a former national security correspondent, argued in an article for The Times, that may not be enough.

“Creating a significant new arsenal of super-fast weapons could make other countries jittery — fearing that they would be robbed of the ability to respond effectively to a major attack,” he wrote, asking whether a hypersonic missile “is that fast.” that it could exceed capacity.” ability of people to act wisely and avoid a conflict they would rather avoid?”

I asked Andrea Charron, a professor at the University of Manitoba and director of the Center for Defense and Security Studies there, whether the new systems that Canada will fund along with the United States will provide adequate warning when a hypersonic missile is fired.

“Once they’re launched, I don’t think anyone will have a good solution,” said Professor Charron. The new systems and sensors, she added, are designed to prevent a launch. They “focus on where the potential threat might come from so you can make decisions and do things before you’re in a launch scenario,” she said.

Professor Charron said Norad remained functional despite its age, and upgrades, including an artificial intelligence system for analysis, have expanded its capabilities. Nevertheless, she said, much of Norad is in dire need of investment. The Canadian headquarters in Winnipeg is so overcrowded and so run down, she said, “it needs to be razed to the ground.”

Ms. Anand made her Norad announcement for perhaps the most controversial symbol of the political unrest surrounding major military spending in Canada: an aging CF-18 fighter jet.

In 2010, the Conservative government said it would spend 9 billion Canadian dollars to replace the CF-18s with a fleet of F-35 jets. Prime Minister Justin Trudeau canceled the plan when he took office in 2015. Now his government is in talks to buy F-35s.

The Conservatives’ criticism of Ms Anand’s announcement was mainly that it does not go far enough. The party has consistently called for a renewed commitment to Norad.

But there was little outrage from Canadians who think the government should spend that $5 billion elsewhere, such as on health care.

Professor Charron said it was most likely muted for two reasons. Outside of Christmas, Norad has a low public profile. The announcement was also made at a time when Canadians’ attention is elsewhere.

“We’re all kind of focused on hyperinflation, the cost of fuel, college degrees and everything,” she said. “There is no room for indignation here.”