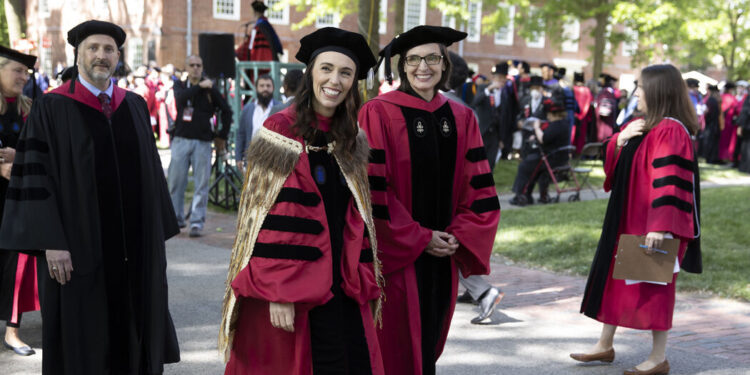 WELLINGTON, New Zealand — Abroad, New Zealand Prime Minister Jacinda Ardern remains a leading liberal light. On a recent trip to the United States, she gave the opening address at Harvard, joked with Stephen Colbert, and met President Biden in the Oval Office. At each stop, she highlighted her successes in passing gun restrictions and coping with the pandemic.

At home, Mrs. Ardern’s star fades. Rising prices for food, fuel and rent are making the lives of many New Zealanders increasingly difficult, and an explosion of gang violence has shaken suburbs that were not much concerned about their safety.

Polls show her center-left Labor party has its lowest level of support in five years, with an election in 2023. That, said Morgan Godfery, a liberal writer and senior lecturer in marketing at Otago University in Dunedin, reflects the view that Ms Ardern is “ missing in action” on the issues that voters care about.

“New Zealanders who go through this day-to-day are frustrated with a lack of change,” Godfery said. “But if you look from abroad, you don’t see the lack of policy, but the personality. And that’s where the mismatch comes in.”

Ms. Ardern built an international profile as a progressive feminist and compassionate leader, all the more noticeable when a wave of right-wing populism swept across the United States and other countries. It has enabled her to amass unusual star power for the leader of a small country.

During her first term in office, she received much acclaim as she guided her country through the aftermath of the Christchurch mosque massacre and the rise of the pandemic. Within days of the mosque shooting, she announced a total ban on military-style weapons. And after the arrival of the coronavirus, she took swift action to eliminate the virus through lockdowns and border controls, largely preserving normal life.

Her pandemic success helped lift her party to an outright majority in parliament in the last election, in October 2020 – the first time a party had achieved a majority since the country transitioned to its current electoral system in 1993.

But it can also cause her current problems. As New Zealand emerged from the pandemic with one of the world’s lowest death rates, “there was a feeling that the government can really do the impossible by stopping a virus that is plaguing the rest of the world,” said Ben Thomas, a conservative commentator.

With most of its virus restrictions lifted, Ms Ardern’s government has lost its uniting fight against the pandemic and with it much of its bipartisan support. What remains is soaring inflation, increasing gun violence and little progress on issues that have plagued New Zealand for decades.

“The prime minister has gone from untouchable – almost Olympic – levels back to being a regular politician,” Thomas said.

Ms Ardern, 41, is one of many world leaders whose support has waned amid the economic turmoil caused by the war in Ukraine and pandemic-related supply chain problems. Mr Biden’s approval ratings are around 40 and France’s President Emmanuel Macron lost his party’s parliamentary majority in an election marked by frustration over the cost of living.

New Zealand’s 6.9 percent inflation rate is lower than 9.2 percent in the developed world as a whole, and Ms Ardern has responded to criticism by pointing to global pressures beyond her control.

“The whole world is experiencing its worst economic shock since the Great Depression, with the war in Ukraine and Covid-19-related supply chain problems, with the worst inflation spike in decades,” said Andrew Campbell, a spokesperson for Ms. Ardern.

Her government has announced, among other things, that 350 New Zealand dollars ($220) will be paid to middle- and low-income New Zealanders to help alleviate the rise in the cost of living. However, many consider the government’s response to be inadequate and dissatisfied with foreign comparisons.

Ms. Ardern has also found herself struggling with increasing gun violence, with at least 23 gang-related drive-by shootings reported in late May and early June as two once allied gangs battled for territory.

At times, police officers, typically unarmed in New Zealand, have been forced to carry guns in parts of Auckland, the country’s largest city. Last week, Ms Ardern demoted her police secretary, saying she had lost “focus”.

After her sudden elevation to Labor leadership in 2017, her party went through a wave of ‘Jacindamania’, fueled by its fresh face and promises of sweeping reforms, to form a government with two smaller parties in an upset victory over the center-right National Party.

Three years later, in the next national election, 50.01 percent of voters supported Labour. Until February of this year, polls showed the party still had the support of up to 50 percent of voters.

That month, the government began easing coronavirus restrictions. With the pandemic fading as a problem, Labor now has an average of 35 percent support in polls, and the National Party is at 40 percent. Including their allied parties, the two sides are evenly matched in the polls.

Political analysts aren’t sure if Ms Ardern can make breakthroughs in any of the long-standing problems to improve her position.

The country has also battled persistent child poverty, making rheumatic fever and lung disease rates surprisingly high for a developed country. In 2017, Ms Ardern declared reducing child poverty a core objective. Today, 13.6 percent of New Zealand’s children live in poverty, down from 16.5 percent in 2018, but above the government’s target of 10.5 percent.

And despite Ms Ardern’s pledge to treat climate change as her generation’s “nuclear free moment,” emissions have risen 2.2 percent since 2018.

Mr Campbell said the government had made progress on key issues despite the challenges of Covid-19. “We have continued to address the long-term challenges our country has faced, including overseeing the government’s largest housing program in decades, lifting tens of thousands of children out of poverty and taking real climate action,” he said.

But Mr. Godfery, the liberal writer, said that Mrs. Ardern had not received enough help from her team in translating her rhetoric into policy.

Ms Ardern “is a genuinely caring and compassionate individual who is strongly committed to issues such as inequality, climate change and child poverty,” said Mr Godfery. “But that often does not translate into a concrete policy programme.”