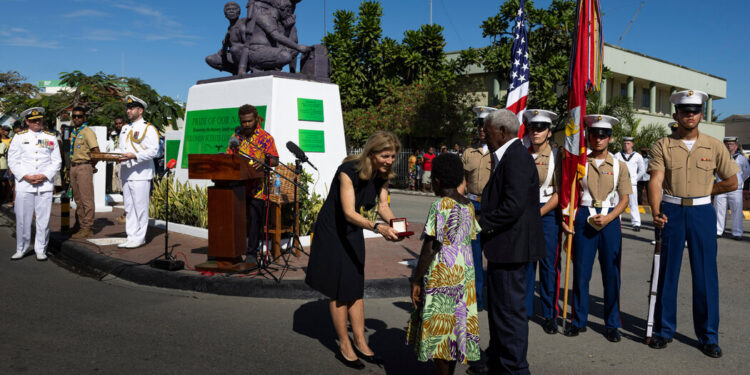 Caroline Kennedy, the United States Ambassador to Australia, and Wendy Sherman, the Deputy US Secretary of State, stood together at dawn on the island of Guadalcanal on Sunday to mark the 80th anniversary of the near-death battle in World War II. led from their fathers, and that redefined America’s role in Asia.

Then and now there was violence, competition between superpowers and nervous anxiety about the future. Their visit took place as the Chinese military was expected to complete 72 hours of exercises around Taiwan to simulate an invasion. And in their comments at events with officials from Japan, Australia, New Zealand and the Solomon Islands, both officials emphasized that the region — and the world — is at a different crossroads.

Surrounded by local benefactors, Ms. Kennedy pledged to “honor and work for those who came before us and do our best to leave a legacy for those who follow.”

Mrs. Sherman was sharper. “It’s up to us to decide whether we want to continue to have societies where people are free to express their views,” she told a group gathered on a leafy ridge above the Solomon Islands’ capital, Honiara. “If we want to have governments that are transparent and accountable to their people. If we want an international system that is fair and orderly, where everyone plays by the same rules and where disputes are resolved peacefully.”

In many ways, the visit to Guadalcanal was the bookend of an exciting week that began with travel to Asia by Secretary of State Antony J. Blinken and Speaker of the House of Representatives Nancy Pelosi, whose brief time in Taiwan marked the start of China’s military exercises. . Throughout the region, history, diplomacy and crisis were intertwined, as often happens when competition between major powers intensifies.

As Hal Brands, a professor of global affairs at Johns Hopkins University, recently wrote, the early years of the Cold War were also marked by “diplomatic clashes and fear of war,” as Russia and the United States competed for a position in a still troubled world order.

Today’s superpowers are different, and so are the disputed locations, with new proving grounds such as Ukraine and Taiwan. But some spots on the map — including the Pacific islands — seem destined for repeat roles.

China has worked across the region to secure influence, resources and possibly military bases in what security analysts describe as an attempt to disrupt the Australian and US presence in the island chains that played a pivotal role in World War II.

In the Solomon Islands, one of the poorest of the Pacific Islands, the government has been particularly accommodating. In 2019, Prime Minister Manasseh Sogavare severed diplomatic ties with Taiwan, the self-governing island that China considers a renegade province. A few months ago, he signed a security deal with Beijing that would allow the Chinese navy to use the same islands where some 7,000 Americans died in World War II.

Mr Sogavare, who met privately with US officials and did not attend Sunday ceremonies, has maintained that no Chinese base is en route. Nevertheless, the United States announced this year that it would reopen an embassy in Honiara, while adding embassies in Kiribati and Tonga — two other Pacific countries with a large Chinese presence.

And along with formal diplomatic pressure, which Australia has also intensified, there have been frequent reminders of American ties reaching as far back as the 1940s.

Mrs. Kennedy, the daughter of John F. Kennedy, and Mrs. Sherman, whose father, Mal Sherman, was a Marine, recently discussed their connection to the Solomons and the war.

“We thought about how she wouldn’t be here. I wouldn’t be here if our fathers hadn’t been saved,” Ms Sherman said in an interview before the trip. It was also clear, she added, that those stories presented an opportunity to “energise our partners.”

In a video featuring Americans fighting, Ms. Kennedy visiting a World War II memorial in Australia, and Ms. Sherman touching her father’s uniform, they pledged that the United States “would refocus on working with our allies and partners.” “.

In their speeches and free moments they spoke of family anecdotes and shared experiences – selfless, win, freedom, personal risk, United the words were often repeated. With Ms. Sherman calling China’s response to Ms. Pelosi’s trip “irresponsible” at a press conference, it was a visit meant to resonate for months.

“It’s part of the American comeback strategy,” said Clive Moore, a professor emeritus of history at the University of Queensland, whose research has focused on the Solomon Islands. “Obviously they talked about what America needs to do to get back on track.”

But in such a tense time, the personal sometimes overshadows the political. Ms. Sherman suppressed emotion during her main sunrise remarks. She has often said that her father rarely told war stories beyond the basics: He dropped out of college two days after Pearl Harbor and was injured during the Guadalcanal campaign.

The story of Mrs. Kennedy’s father is better known.

He was hardly a famous Kennedy at the time. He ended up in the Pacific after the six-month Battle of Guadalcanal was officially over, with the war shifting but still precarious as fighting with the Japanese continued.

In April 1943, he took command of a patrol torpedo boat, the PT-109, which, according to Fredrik Logevall’s biography “JFK”, was “dirty and scarred”.

On August 1, that boat was one of 15 sent to Blackett Strait, northwest of Guadalcanal, to intercept a Japanese transport convoy. Just after 02:00 it was rammed by a Japanese destroyer.

Two of Kennedy’s men were killed instantly. He and 10 others survived, including an engineer, Patrick McMahon, who was badly burned. Kennedy gathered the men on the main wreckage until dawn, then decided they had to swim to land.

With the belt of McMahon’s life jacket between his teeth, Kennedy took the lead and led them to a small island, Olasana. The grueling dive lasted nearly five hours.

Kennedy swam out alone that night with a lantern in hopes of finding an American boat to rescue them. After failing—and nearly drowning—he and another crewmember set out for a larger island where, at some distance, they saw what looked like two islanders in a canoe.

“They thought he was from Japan,” John Koloni, the son of one of them, Eroni Kumana, said in an interview in Honiara. “Then he raised his hands and waved, ‘Come, come, come, America.'”

The men seemed to disappear, but when Kennedy returned to Olasana late that night, the same two were there. They were teenage scouts working for the Allies: Biuku Gasa and Mr. Kumana. After another attempt to find a friendly boat failed, Mr. Gasa had an idea. Kennedy scribbled a message on the shell of a coconut that read: ALIVE NEED SMALL BOAT KENNEDY.

The two scouts carried the coconut through enemy waters to an Allied base 58 miles away.

Along the way, they stopped to brief a fellow scout, who told an Australian coastguard, an intelligence agent who reported enemy ship and troop movements. The Coast Guard promptly dispatched seven scouts in a large canoe filled with food, drink and cigarettes.

The next day, August 7, the islanders laid Kennedy on the bottom of the canoe, covered it with palm fronds to avoid detection by Japanese aircraft, and paddled it to an island controlled by Australian troops. Within hours, the entire crew was safe at a nearby base.

Ms. Kennedy said that in addition to her father, “Numerous Americans and allied families owe the Solomon Islands for their survival.”

Mr. Kennedy would have agreed. If he were still alive, he might also have a message for his daughter and others at the State Department who are living through the current moment of uncertainty in Asia. Perhaps he would even have quoted from his own account what wisdom could be drawn from what happened after his boat was rammed.

“Before that I was a bit cynical about the American as a fighter. I had seen too much stomach aches and discharge,” he told his parents in a letter. “But with the chips down, that all faded.”

“For an American it has to be very easy or very difficult,” he added. “If it’s in the middle, then there’s a problem.”