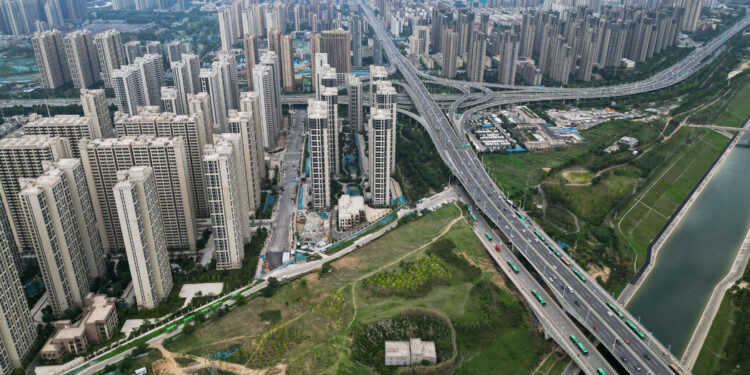 For decades, buying real estate has been considered a safe investment in China. Now, instead of building a foundation of wealth for the country’s middle class, real estate has become a source of discontent and anger.

In more than 100 cities across China, hundreds of thousands of Chinese homeowners are teaming up and refusing to repay loans on unfinished properties, one of the most widespread acts of public resistance in a country that has crushed even small protests.

The boycotts are part of the fallout from a deteriorating Chinese economy, slowed by Covid lockdowns, travel restrictions and shaky confidence in the government. The country’s economy is heading for its slowest growth in decades. The factories sell less to the world and consumers spend less at home. On Monday, the government said youth unemployment had reached an all-time high.

These financial setbacks are exacerbated by the problems of a particularly vulnerable sector: real estate.

“Life is extremely difficult and we can no longer afford the monthly mortgage,” homeowners in China’s central Hunan province wrote in a letter to local officials in July. “We need to take risks out of desperation and follow the path of a mortgage strike.”

The mortgage revolts have shaken a real estate market facing the effects of a decades-long housing bubble. It has also created unwanted complications for President Xi Jinping, who is expected to reach a third term as party leader later this year on a message of social stability and continued prosperity in China.

So far, the government has made every effort to limit the focus of the boycotts. After an initial stream of mortgage strike messages went viral on social media, the government’s internet censorship sprang into action. But the impact of the strikes is already beginning to spread.

The number of properties where homeowners’ collectives have begun or threatened to boycott has reached 326 nationwide, according to a crowdsourced list titled “WeNeedHome” on GitHub, an online repository. ANZ Research estimates the boycott could affect about $222 billion in home loans on bank balance sheets, or about 4 percent of outstanding mortgages.

Any momentum behind the mortgage strikes would contribute to a growing number of economic problems facing the Chinese Communist Party.

When a nationwide bank froze cash withdrawals in central China’s Henan province, it sparked a violent clash between savers and security forces. Recent graduates struggle to find work with a youth unemployment rate of 20 percent. Small businesses, the largest provider of jobs, are fighting to survive under the constant threat of Covid-19 lockdowns.

On Tuesday, Chinese Premier Li Keqiang visited the southern tech hub city of Shenzhen and urged a “heightened sense of urgency” for an economic recovery. But the real estate industry presents a unique set of challenges.

Real estate, by some estimates, is the engine of about a third of China’s economic activity, and housing accounts for about 70 percent of household wealth, making it the most important investment for most Chinese. To allay concerns about an overheated real estate market, in which homeowners often bought apartments before construction, China began cracking down on excessive lending by developers in 2020.

How much is it owed? Evergrande has more than $300 billion in financial obligations, hundreds of unfinished residential buildings and angry suppliers that have shut down construction sites. Things got so bad that the company paid its delinquent bills with unfinished properties and asked employees to borrow money.

How did the company get into financial trouble? For decades, the Chinese real estate market has functioned unrestrained. But recently, Beijing began taking measures, including new restrictions on housing sales, to tame the sector. Evergrande borrowed heavily as it grew and expanded into new businesses, eventually ending up with more debt than it could pay off.

How has the Chinese government handled the crisis? Beijing sat on the sidelines for months as Evergrande approached financial collapse, toning down the effects the company’s problems could have on the economy. In December, the government took a more hands-on approach, as officials from state-sponsored institutions joined a committee to help restructure the company.

Where is Evergrande now? The company defaulted in December and has announced it will announce its restructuring plan later in July. In the latest setback, Evergrande said its CEO, Xia Haijun, had resigned over his involvement in a plan to funnel $2 billion into the company’s coffers from one of its subsidiaries.

The move created a cash crisis for many companies that relied on easy access to debt to keep construction projects going. As financial pressures mounted, Evergrande and other major property developers defaulted, and the impact rippled across the industry.

Last month, hundreds of companies providing services and supplies to the real estate sector, such as construction companies and landscape architects, issued a joint statement to government authorities that they were “facing a crisis of survival” because they had not been paid for months.

Homeowners of a partially built apartment complex in the central Chinese city of Zhengzhou compared themselves to Rickshaw Boy, or Camel Xiangzhi, a tragic character in Chinese literature whose dream of owning a rickshaw is thwarted by corruption and dishonesty.

“We, as thousands of Xiangzis, must throw those shackles away, and let those who robbed us of money and destroyed our cars know that Xiangzi is no longer the lamb slaughtered by others,” the homeowners wrote in a message last month. to local banks and government officials. If the developers are not finished building, “all owners will be forced to stop paying back the loans,” they wrote in late August.

One of the homeowners who signed the notice was Andy Li.

Mr. Li first bought a $150,000 apartment in the development in 2019. After three years of making monthly mortgage payments, he learned in February that the apartment would not be completed in May as promised. In fact, all construction had stopped. The Yufa Group, the developer, told the homeowners that the completion had to be postponed until December.

“We don’t even know what happened to the money. How come there is no money?” said Mr. Li. “We will definitely stop paying the mortgage if there really is no other option.”

The Yufa Group was not immediately available for comment and a phone call went unanswered. A second number listed was disconnected. The local government in Zhengzhou has said it is setting up a rescue fund to provide capital to struggling developers. Last month, the Politburo, China’s highest governing body, said local governments should ensure that unfinished buildings are completed.

But Michael Pettis, a professor of finance at Peking University, said the mortgage boycotts are part of a bigger problem: the bursting of a Chinese housing bubble that has inflated in recent decades. Even if the Chinese authorities provide developers with sufficient capital, the underlying housing units are still overvalued, he said.

“There’s all this fictitious wealth created by rising real estate prices that just isn’t justified,” said Mr Pettis. “Those solutions are just temporary solutions to try to make things less bad in the short term. Ultimately, I don’t think they will succeed.”

Real estate developers didn’t have to worry much about financing for years. Access to credit was easy and about 90 percent of new homes were “presold.” Buyers would hand over deposits and make mortgage payments before construction was complete.

That system gave developers the money they needed to keep building, and until recently, homeowners weren’t complaining, as real estate values ​​in China were expected to continue to rise, as they had for decades.

In the first half of 2022, sales of China’s top 100 property developers fell 50 percent, according to data from China Real Estate Information Corp.

Mr. Li, 29, who works in hotel management, recalls that the market looked much more promising. When he first bought his apartment, he made a 30 percent down payment with money scraped from his parents’ pension funds. Although he lives in Beijing, he thought the property in Zhengzhou, surrounded by parks and schools, would be a good first step in his plan to return to his hometown and start a family with his wife.

Those plans have now been put on hold as construction in the Zhengzhou development remains stalled. Mr Li and the other homeowners plan to implement the boycott if the situation does not improve, he said. In their letter, the homeowners acknowledge the risks.

China’s social credit system penalizes violations — such as failure to repay loans — by limiting a person’s ability to travel, get their children to school, or borrow from banks in the future.

However, in last month’s post, the homeowners said those risks outweighed a threat to their survival. “When we’re feeling desperate,” they wrote, “for us, the credit system is a paper tiger, a shackles that can be tossed in the trash at any time.”