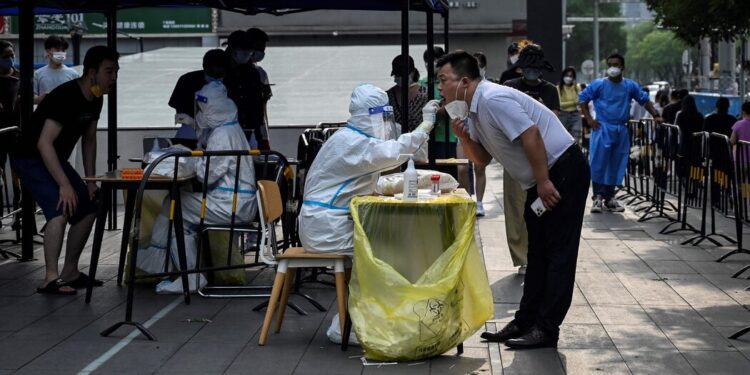 A new Chinese study on the relatively low risks of the Omicron variant of the coronavirus has reignited debate over whether the country’s aggressive response to Covid-19 cases is necessary.

China’s Center for Disease Control and Prevention published a study on Saturday showing that 22 of more than 33,000 patients hospitalized after testing positive for Omicron developed serious illness. All patients who developed more serious illness were over age 60 and had underlying medical conditions, according to the study, which was conducted from March 22 to May 3 at four hospitals in Shanghai.

In China, anyone who tests positive for the coronavirus is sent to a hospital or isolation center.

Under the country’s ‘zero Covid’ policy – which shut down Shanghai for nearly two months – a single positive test result can cause a closure of an entire apartment complex, leaving hundreds and even thousands of residents locked up at their homes for weeks without any notice. When someone tests positive for the coronavirus, residents in a certain vicinity may be ordered to take tests for three consecutive days to be cleared as a low health risk.

The lockdowns and constant testing have brought the Chinese economy to a standstill and have sparked resentment among segments of the population who say the measures are excessive.

Last week, a protest broke out in Kunshan, a city bordering Shanghai, over rules that prevent commuters from going to the financial center for work. It came after a demonstration last month in Beijing, the capital, where a group of students from Peking University protested after being ordered to self-isolate while teachers and their families were not tied to similar restrictions.

One of the study’s 19 authors was Zhang Wenhong, an infectious disease specialist and one of China’s leading voices on Covid-19 who has argued against excessive lockdowns. The study “provides evidence for refining Covid-19 public health strategies” to avoid overwhelming medical resources, the authors wrote, without making specific recommendations.

The findings were in line with other studies that have concluded that Omicron is generally less severe than the Delta variant, although it can be fatal for some people. Still, it sparked heated discussions on Weibo, China’s Twitter-like social media platform. In the three days since the publication of the survey, the hashtag on the report has received more than 98 million views and 10,000 discussions on the platform.

Some people questioned the need for lockdowns to contain the virus after seeing the data. One person noted that there were no serious illnesses for low-risk people and that the proportion of people who developed serious illness was less than a tenth of a percent.

“However, we paid such a huge price (materially and mentally),” this person wrote, adding that the zero-covid policy seemed “ignorant”.

Defenders of China’s tough stance saw the study as a political issue. A Weibo post accused Dr. Zhang of publishing the paper to justify Shanghai’s initial approach to contain the virus with more targeted restrictions. That strategy was abandoned in favor of a full lockdown in April and May.