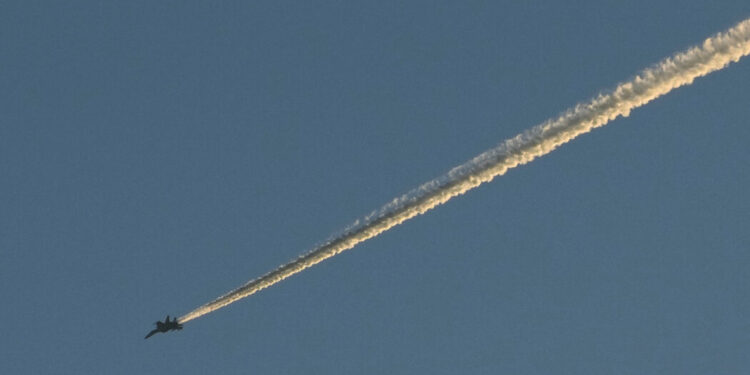 China continued to express its anger on Saturday over House Speaker Nancy Pelosi’s recent visit to Taiwan, with its third consecutive day of military exercises that have drawn closer to the island and raised concerns about potential conflict.

Taiwan’s Defense Ministry said on Saturday that several batches of Chinese military aircraft and warships had been detected around the Taiwan Strait, some of which crossed the informal median line separating the island from mainland China. They appeared to be engaged in an exercise simulating an attack on the main island of Taiwan, the ministry said.

China’s display of power, expected to last through Sunday, is already posing a threat to territory that Taiwan sees as its own, more immediate than previous exercises.

China has launched at least 11 missiles into waters north, south and east of Taiwan, including at least one that flew over the island, though Taiwan said it was at high altitudes and posed no threat. On Friday, it also deployed fighter jets, bombers, destroyers, drones and escort ships to waters near the island. Several of the zones designated by the Chinese military for this week’s exercises are closer to the island than those announced during the Taiwan Strait crisis of the mid-1990s, which also saw China firing missiles around Taiwan.

At least 49 Chinese military jets have crossed the median line since the exercises began on Thursday, according to Taiwanese officials.

Taiwan’s foreign ministry said in a statement on Saturday that China “unilaterally created a crisis” by overreacting to Ms Pelosi’s visit.

The military exercises are the most visible element of China’s response to Ms Pelosi’s trip to Taiwan, which she said was intended to show support for the island and its vibrant democracy. Before her arrival on Tuesday, China had repeatedly warned that the gesture by Ms. Pelosi – the highest-ranking US official to visit Taiwan in 25 years – would have “serious consequences”. China claims Taiwan as its own territory and Chinese leader Xi Jinping has promised a possible reunification, if necessary by force.

China also said Friday it would cancel or suspend talks with the United States on military coordination and climate change, which some analysts say would increase the chances of a miscommunication turning into a full-blown crisis.

At the same time, the United States is seeking to strengthen its ties with other Asian countries as a counterbalance to China’s regional and global influence. Secretary of State Antony J. Blinken met with the President of the Philippines, Ferdinand Marcos Jr., in Manila on Saturday. In a public exchange, Mr Marcos told Mr Blinken that he did not think Ms Pelosi’s visit had “increased” tensions in the region, which he said had already been high – an apparent rebuttal to China’s claims that the United States was responsible for the current frictions.

Fears that China would try to physically prevent Ms Pelosi’s visit were not realised. But US officials remain concerned that the exercises, which began less than 24 hours after her departure from Taiwan, could still, intentionally or accidentally, escalate into more direct conflict.

Chinese officials, who have encouraged boastful and sometimes virulent nationalism domestically, may feel pressured to show they are responding forcefully. Some Chinese social media users have expressed disappointment or embarrassment that the government did not go further to prevent Ms Pelosi’s visit; some made it clear that they expected military action.

Even if the exercises don’t escalate into a full-blown crisis right away, they could be a sign of a new pattern of aggression and incursions by the Chinese military. The Global Times, a state-run tabloid, said in an editorial on Friday that work to promote reunification with Taiwan had “entered a new phase.”

The United States has tried not to provoke China further. It has said it remains committed to the status quo in Taiwan, acknowledging China’s declared claim to the island without acknowledging it. The Pentagon ordered the USS Ronald Reagan to “stay on station” in the region, some distance from the Taiwan Strait.

But China has made it clear that it considers any criticism of its exercises an insult. It has summoned several ambassadors after their countries expressed concerns about the exercises. After some of the Chinese missiles landed on Thursday in waters that Japan claims as its own, prompting the Japanese prime minister to call for an “immediate stop,” a representative of the Chinese embassy in Japan told Japan to “not into the abyss” of the geopolitical confrontation.