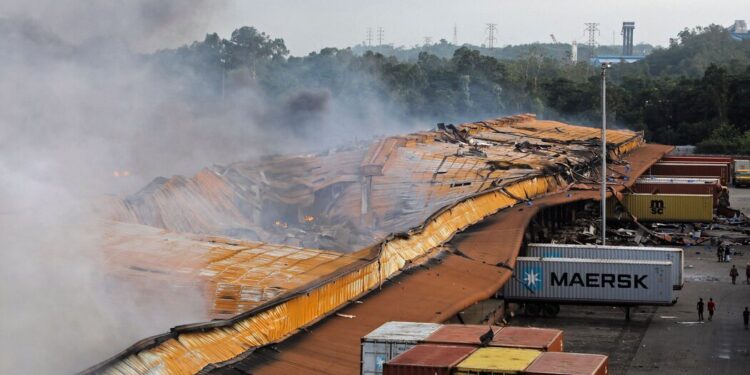 DHAKA, Bangladesh – At least 39 people were killed and hundreds more were burned when a fire at a container depot in Bangladesh sparked a series of explosions, officials said on Sunday.

Many people were in critical condition in hospital burn wards, according to local officials, who feared the death toll would rise. By noon, firefighters were still trying to contain the blaze, which started around 10:45 PM on Saturday at BM Container Depot in the town of Sitakunda, about 10 miles (16 km) from Chattogram, Bangladesh’s main port.

The cause of the disaster, at one of Bangladesh’s largest container depots in the interior, was not immediately clear. Attempts to contact executives at the company running the depot were not immediately successful.

Shahadat Hossain, the senior government official for Sitakunda, said a large amount of hydrogen peroxide may have been stored in the depot, along with other goods. “We can’t say anything more at this point,” he said.

Hundreds of people were admitted to Chittagong Medical College Hospital, said Dr. Mohammed Elias Chowdhury, the Civil Surgeon for Chattogram, also known as Chittagong. “Many of them are critical,” he said. “Some people have 60 to 70 percent burns on their bodies.”

Photos from the hospital showed injured people lying on the floor waiting for treatment. dr. Chowdhury said all leave for doctors and other staff at the hospital had been cancelled.

Hasan Mahmud Arafat, 25, a university student who volunteered to help at the hospital, said all the beds in the burn wards were full and ambulance sirens blared all night.

Fires with mass casualties are a recurring problem in Bangladesh. In July, a factory fire in the city of Narayanganj killed at least 51 people.