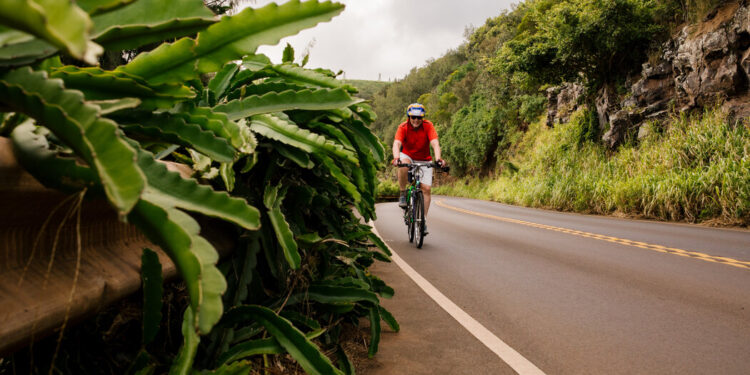 Today, an old transportation road still runs along the western edge of Maui and John and I found part of it just north of a main road intersection in Kaanapali. This road, now abandoned, will one day become part of the West Maui Greenway, a proposed 40-mile route from Ukumehame Beach Park to Lipoa Point on the northern tip of West Maui – a cyclist’s car-free dream.

After about six miles, John and I turned onto a dirt road that climbed steadily for about 600 meters to the Ironwood Ranch, one of the island’s last horseback riding ranches. The owner, Kimo Harlacher, let us charge the bikes in a shed and set up hammocks in a gazebo under a Java plum tree in exchange for help with the horses. We used his electric mountain bikes to ride to a grassy spot overlooking the ocean where travelers can camp later this year. Wild boars scurried around the citrus trees.

The next day, the drive was spectacular, difficult, and rewarding: a 22-mile epic that would drain the batteries with 3,500 feet of climbing up and down a remote road with a heart attack elevation profile.

The Honoapiilani Highway, which becomes the Kahekili Highway, has curves that are tight enough for cars to crawl. For three hours, John and I made our way around the northern tip of West Maui, the road becoming so narrow at times that the cliffs and rainforest pushed the center stripe straight out. We drove past the Nakalele blowhole and plodded up ‘the wall’, a short, brisk climb that confused us even with an electric assist. We walked down blind corners that revealed thundering coves and sheer cliffs. There were banana bread stalls, farms and timeless villages.

We stopped at a few places to let cars pass and then watched those cars meet oncoming cars and a game of who will back up first started. The trade winds hammered on our faces on visible curves, then diminished to a whisper as we rounded the corners of ravines and drains. The battery-powered gauge on my handlebars diminished as the motor groaned up slopes. The descents came fast and exciting and I leaned the bike into the corners. You could fly to Maui for this section alone.

That night, our last, we camped on the ranch of George Kahumoku, Jr., a Grammy award-winning musician. For a donation — he helps feed the island’s homeless — visitors can come here on weekends for breakfast and music, but guests usually can’t stay here. He allowed us to do that because he had just returned from a tour of my hometown in Oregon and needed help tending his taro fields. For others, Kahului’s hotels are less than 10 miles away.