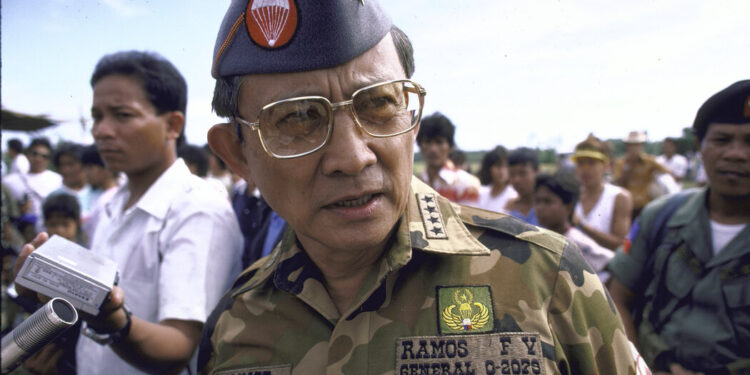 Fidel V. Ramos, a military leader who succeeded Corazon C. Aquino as President of the Philippines, and oversaw robust economic growth, exceptional political stability, and reconciliations with communist insurgents and Muslim separatists from 1992 to 1998, died in Manila on Sunday. He was 94.

The Defense Ministry confirmed his death in a statement on Sunday.

In a nation ravaged by the corrupt dictatorship of Ferdinand E. Marcos, who was ousted in a popular uprising in 1986, Ms. Aquino and Mr. Ramos led a six-year battle under the banner of “People Power” , to restore democracy, reform a bottom-up economy and make peace with extremists.

It was easy to say, as many Filipinos did, that Ms. Aquino restored democracy and Mr. Ramos restored the economy. In fact, she initiated many economic policies that blossomed under Mr. Ramos, and he successfully defended Mrs. Aquino’s fragile democratic government against repeated military mutinies.

Mr. Ramos, a great-nephew of President Marcos, was the scion of a patrician family steeped in public service. His father was ambassador during World War II and foreign minister in the Marcos regime. Mr. Ramos graduated from the United States Military Academy, served in the Korean War alongside American troops and commanded a Philippine contingent in the Vietnam War.

He was also a study in opposites. Filipinos marveled at the deeds and character of a Protestant who became president of a Roman Catholic country, of a harsh general who brought about liberal economic, political and social changes in a nation exploited for centuries by Spanish and American colonialists, Japanese invaders and the infamous two-decade reign of Ferdinand and Imelda Marcos.

Early in his career, Mr. Ramos was a Marcos loyalist who commanded a security force that committed human rights abuses and arrested thousands of dissidents, including Mrs. Aquino’s husband, Senator Benigno S. Aquino Jr., who had been incarcerated for years. and then murdered on the day of his return. Critics called Mr. Ramos a ruthless Marcos henchman.

But Mr. Ramos, who insisted he was only maintaining law and order, was later hailed as a national hero for making a moment of truth decision to break with President Marcos, sounding the death knell for his regime and swearing allegiance. to the Constitution and to Mrs Aquino. She called him army chief and then defense secretary, but did not support him for the presidency.

Hardly elected in multiples, Mr. Ramos took office and swore not to be a copy of Mrs. Aquino. “She has done her job, which is to establish political freedom,” he told The Far Eastern Economic Review. “But the second phase is the strengthening of democracy. My priority is to unite the country.”

He reached peace agreements with two long-running guerrilla uprisings, the Communist New People’s Army and the Muslim separatists of the Moro National Liberation Front, and granted amnesty for thousands. He also purged the National Police of 600 corrupt officers and acted against numerous warlords involved in smuggling, drug smuggling and other crimes.

To revive the economy, he introduced reforms to encourage private entrepreneurship, open trade and foreign investment. He traveled through Asia and the United States, where he met with government and business leaders to highlight his country’s stable political climate, falling inflation and favorable exchange rates. By some estimates, he generated $20 billion in new foreign investment in the Philippines.

He deregulated and privatized industries in an economy dominated by a few large corporations, overhauled the government’s inefficient tax system, and encouraged family planning practices to curb population growth. To improve the unreliable electricity supply, he reorganized the state power company, authorized new power plants and made brownouts a rarity.

National growth under Mr Ramos rose from nearly stagnant to nearly 6 percent a year before sinking into an East Asian regional slump to 3 percent in his last year in office.

“The Philippines has proven to be a good model in the developing world for demonstrating that democracy and development are compatible,” Mr. Ramos told DailyExpertNews in 1998. free market system, which must be transparent and predictable.”

Fidel Valdez Ramos was born on March 18, 1928 in Lingayen, north of the capital Manila, to Narciso and Angela Valdez Ramos. His father, a journalist, lawyer and congressman, was a wartime envoy to Taiwan and Secretary of State to Marcos. One of Fidel’s sisters, Leticia Ramos Shahani, was a diplomat and Philippine senator.

After graduating from West Point in 1950, Mr. Ramos earned a master’s degree in civil engineering from the University of Illinois and other degrees in business and national defense from Philippine universities.

He married Amelita Martinez in 1954. She survives him, as do their four daughters, Angelita Ramos-Jones, Carolina Ramos-Sembrano, Cristina Ramos-Jalasco and Gloria Ramos. A fifth daughter, Josephine Ramos-Samartino, died in 2011.

After serving in Korea and Vietnam, Mr. Ramos returns to a Philippines gripped by protest against the Marcos regime. He joined the dictator’s inner circle, one of the “Rolex 12” advisers who received gold watches, and was appointed commander of the Philippine Constabulary, a national security force dealing with terrorists.

In 1972, Mr. Marcos was barred by law from seeking a third term and declared martial law, citing the threat of communist and Islamic uprisings. He ruled by decree, curtailed civil liberties, shut down Congress and arrested opponents, including Mr. Aquino, who was imprisoned for seven years and shot dead at the Manila airport when he returned from exile in 1983.

The murder catapulted his widow into the political spotlight. Three years later, in a quick election allowed by Mr. Marcos because he thought he couldn’t lose, Mrs. Aquino won the presidency. mr. Marcos tried to steal it back by fomenting a military coup.

For Mr. Ramos, the chief of the armed forces, the moment of truth came on November 22, 1986, when he had to choose whether to remain loyal to Marcos and his old military comrades, or to support Mrs. Aquino.

By midnight, his decree of command went to troops across the country: “The new armed forces of the Philippines stand behind President Aquino’s government, which has been popularly elected and installed. We must not betray our country and our people.”

Jason Gutierrez contributed to the reporting.