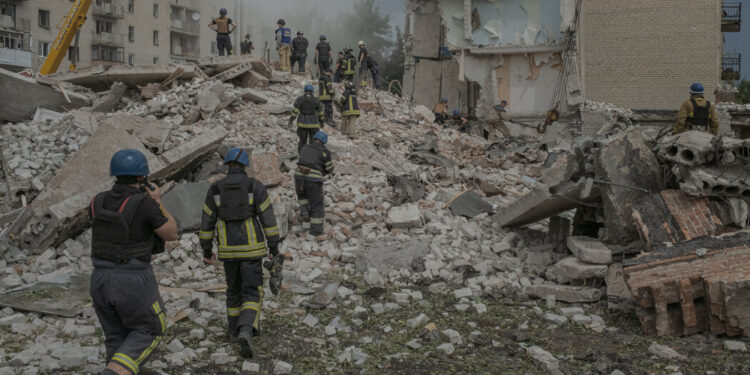 CHASIV YAR, Ukraine – Russia’s offensive in eastern Ukraine is intensifying in Donetsk province, with a series of towns and villages coming under bombing over the past week as Russian forces direct their firepower further west after taking control of the last city under Ukrainian control in Luhansk Province.

For days, the attacks mostly seemed indiscriminate and aimless, but overall they make it clear that Russia is preparing to take another piece of Donetsk, the other province in the Donbas region.

Even as the Russian military command announced an operational pause to allow its main force to regroup, its forces have stepped up bombardment of the area’s five main towns – Bakhmut, Kramatorsk, Sloviansk, Druzhkivka and Kostiantynivka – as well as surrounding villages. †

Soldiers and emergency services worked through the night to rescue people from a bombed-out apartment complex after a Russian attack in the village of Chasiv Yar, a dozen miles from the front line. By Sunday afternoon, they had pulled five people from the rubble and recovered 15 bodies, but they said they feared 10 more were under the crushed concrete, including a 9-year-old boy.

Four rockets slammed into the nearby town of Druzhkivka just after dawn on Saturday, shaking the city, smashing windows and damaging a shopping center and other public buildings, but caused no casualties. The neighboring town of Kostiantynivka was hit by two cluster bomb attacks on Saturday afternoon and rockets struck two buildings in Chasiv Yar, including the apartment complex, around 9 p.m. Saturday evening.

In Druzhkivka, Ukrainian soldiers lay in a sports hall and may have been targeted, but soldiers clearing broken glass said they had escaped injuries. Police officers who inspected several sites of the bomb and collected debris said the missiles were not precision-guided munitions, so it was difficult to guess a specific target. Two landed in parks and one in the forecourt of a shopping center.

“It won’t destroy Donbas,” said Yevgeny, 45, an IT programmer who retrieved his dusted but undamaged car from a rented garage.

But many of these towns’ residents come from settlements further east already displaced by the war that has raged since 2014, and they say they recognize the signs of fortifying attacks.

“It’s just the beginning,” said Lyudmyla, 61, her face pale from the shock as she stared at the damage to the cultural center in Druzhkivka next to her sister Svetlana, 62.

In Chasiv Yar, a resident, Oleksandr, 31, watched rescue efforts at the stricken apartment complex as machines pulled concrete slabs and rescuers threw rocks to the side. “My grandmother was here,” he said. “That’s her bed,” he added, pointing to the mess. “I hope they find her and I can give her a funeral.”

He said that about 10 civilians, mostly retired women, were living in the building at the time of the strike, but that soldiers had arrived two days earlier. He had tried to persuade his grandmother to move into his house, he said, but she had refused.

The dead included two soldiers who stayed in the building, according to another soldier who arrived at Bakhmut with colleagues from the front line to collect supplies. He only gave his first name, Dyma, and his age, 28, in accordance with military rules. Military vests and backpacks and a broken rifle, covered in brick dust, lay on the ground under the trees.

He said a plane hit the building with missiles. Aerial bombardments were the heaviest, Dyma said. An aircraft had dropped a parachute bomb on their positions at Bakhmut, causing devastating damage. “They’re not announcing it, but we’re taking heavy losses,” he said. “We must close the skies,” he added, reiterating a request from many Ukrainians for aircraft and stronger air defense systems from Western allies to fight Russian air strikes.

As he spoke, there were loud explosions in the distance, the shock wave powerful enough to shake the cars. The Russians had started bombing again and, judging by the distance, they hit Kostiantynivka, Dyma said.

In that town, on Saturday, three neighbors sat chatting on a bench in front of the gate in the shade. They had just had lunch together and at 12:30 PM one of them, Oleksandra, went home to feed her dog.

It was then that their rural neighborhood was attacked. Cluster bombs burst overhead, exploding in the streets and gardens and over the wooden houses, shattered trees and shattered windows and doors with deadly metal shards. Alla, whom neighbors called Aunt Alla, died in her yard, where two cluster bombs exploded.

“Three grannies were sitting there together on a couch and one was killed,” said Mikhail Stubin, 48, almost screaming in anger. His mother and mother-in-law, Alla’s friends, rummaged outside their homes, seemingly speechless.

“It was something terrifying,” said Anna Kaluzhnaya, 69. “First a whistle and then bang it so hard,” she said. Four cluster bombs exploded around her house, destroying the roof and windows on all sides and tearing up the plants in her yard. Metal shrapnel pierced the walls, but she had made a small space in a closet and survived unscathed.

“Nobody expected it in this neighborhood,” she said. “I’m pretty strong-blooded, but this was terrible.”

A few hours later, a second cluster bomb attack hit the city, landing on a former metal factory used as a temporary base by Ukrainian soldiers. One of the factory buildings was damaged and a fire burned all afternoon over a large tract of land below the factory. The soldiers at the gate seemed very upset and asked journalists to leave.

The front line against the Russians is more than 20 miles east of Druzhkivka and Kostiantynivka. But Ukrainian soldiers are common in this area, driving trucks to the front lines, shopping in local stores and resting in residential and government buildings where they can.

Closer to the front there are only military vehicles on the roads and the sounds of war are almost constant. Ukrainian artillery is firing steadily from bases in and around key cities. The smell of fire floats in the air and plumes of black smoke rise in several places on the horizon.

Ukrainian police are guarding the last checkpoint on the outskirts of the city of Sloviansk, which is located in the woods just a few kilometers from the front line. Police officers advanced to their bunker on Saturday afternoon when a nearby Ukrainian multiple rocket launcher fired a volley toward Russian positions.

Villages behind the checkpoint remain in Ukrainian hands, but have been bombed for weeks. Russian artillery hit the area on Saturday morning, setting fire to trees and undergrowth on both sides of the main road. The fields were still smoldering on Saturday afternoon as DailyExpertNews reporters drove through.

President Vladimir V. Putin has said his goal is to bring Ukraine’s eastern provinces of Luhansk and Donetsk under Russian control. Parts of the two provinces have been under the control of pro-Russian separatists since 2014, and Russian invasion forces have concentrated their efforts on the remaining area since withdrawing from Kiev in late March.

Russia has announced an operational pause as its forces regroup after intense fighting for two cities to the east in Luhansk, Sievierodonetsk and Lysychansk. But Ukrainian officials and civilians said there was heavy fighting in the frontline villages as Russian troops continued their advance westward, and Ukrainian troops remained determined to keep them fighting for every inch of land.

“The Russians won’t stop,” said Konstantin, 58, the former manager of a local chocolate factory. He noted on his fingers the places that had already been destroyed in the past five months. “You saw what happened to those places. I have a friend who said his village was completely razed to the ground,” he said. “They’ll take all of this too.”