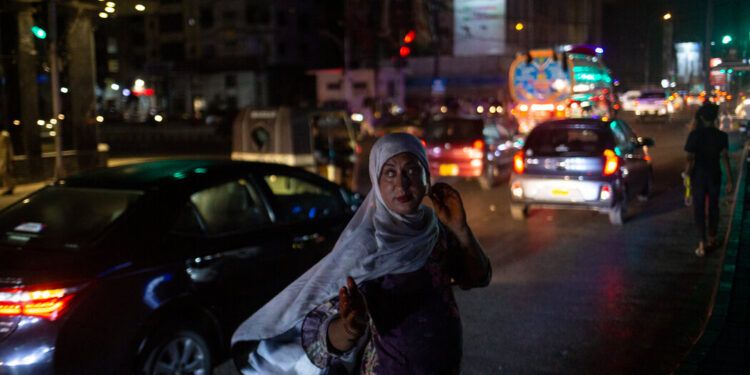 KARACHI, Pakistan — Four years ago, Pakistan came to the forefront of transgender rights worldwide by enacting a law that outlaws discrimination against transgender people in schools, workplaces and public institutions and guarantees them the right to choose their gender on official records.

Pakistan, a country known for its religious conservatism that still bans same-sex relationships, joined a small list of countries — just a dozen according to the United Nations at the time — with comparable transgender protections enshrined in law. , what hopes for a historic turning point in the lives of people long forced to survive on the fringes of society.

For some, it meant coming out of the shadows, a moment captured that year by the debut of Marvia Malik, the country’s first transgender TV news anchor.

But in Pakistan, as in other countries around the world, guarantees enshrined in law do not always translate into reality, do not erase prejudice and, most acutely, do not guarantee security. A spate of violent attacks in Pakistan, several of which were fatal, have targeted transgender people.

Prominent conservatives have denounced the law, calling the push for transgender rights anti-Muslim and a liberal Western conspiracy. Faced with ongoing discrimination and violence, many transgender people live as they did before 2018, hiding their identities, being shunned by their families, deprived of medical care, and huddled together in group homes for safety.

Global data collected by the Trans Murder Monitoring project, funded by the European Union, shows that Pakistan has recently committed an average of about 10 homicides of transgender people per year – more than before the law was passed, and, relative to the population, many more than its neighbors. Usually the victims are transgender women. Rights groups say the actual numbers are much higher, as many hate crimes go unreported.

“The ongoing brutal attacks on transgender women in Pakistan will not stop until authorities say they will hold the attackers to account,” said Saroop Ijaz, senior counsel at Human Rights Watch’s Asia division.

Celebrities have been the target of assault, including Rimal Ali, a transgender model. In the city of Lahore, an attacker shaved her head and eyebrows last year.

“It will be difficult for trans people to live peacefully,” said Arzoo Khan, a transgender head of a human rights organization in Peshawar. “Families had already abandoned us, society doesn’t tolerate us, and now some groups are killing, sexually assaulting and looting us.”

In some countries, diverse gender identity is legally classified as a crime or medical pathology. In other countries, according to law and on official documents, claiming one’s gender identity is only allowed under harsh conditions, ranging from psychiatric evaluations to mandatory hormone treatment and menopausal surgery.

In many countries, discrimination is not enshrined in law or prohibited, although it can be curbed by court decisions. In the United States, states have widely varying laws and precedents; while federal statutes do not explicitly address transgender rights, but they are protected by a number of court decisions and government policies.

With the legislation that came into effect in 2018, Pakistan seemed to break that swamp, allowing people to freely identify their gender and live without discrimination. For many people, it was an extension of South Asia’s ancient history of transgender — or “third gender,” a term some now reject — people living openly, with relatively greater acceptance than much of the world.

But law enforcement is inconsistent across the country’s counties, which are responsible for the local implementation of federal policies in areas such as health, education, safety and family law. That has forced activists to campaign in every province for the legal protections to take effect.

While the law includes a provision calling for the creation of protection centers where transgender people can access mental health care, legal services and temporary housing, only one has opened so far in Islamabad, the capital.

Trans activists say that fighting for rights and raising profile around the world can backfire.

“Everyone says you need to develop your movement as a social justice movement, as a group of people who are marginalized and oppressed, that you need to be more visible,” said Tuisina Ymania Brown, secretary general of the International Lesbian, Gay, Bisexual. Trans and Intersex Association, adding, “But keep in mind that visibility is a bit violent.”

Brazil has legal protections on paper and a relatively visible trans community, yet it has by far the highest number of recorded transgender murders in the world – over 100 in most years.

Brazil’s Supreme Court has criminalized transphobia and lifted barriers for transgender people to officially change their name and gender. But Brazilian trans activists say their rights remain fragile, neither codified by lawmakers nor consistently enforced by officials.

“The fight for our rights has been fought in the courts and on the streets,” said Indianara Siqueira, a Brazilian trans rights activist. “Without the pressure we put on society, we wouldn’t even have a right to exist in this country.”

In Pakistan, same-sex sexual activity is not only illegal, as in dozens of countries, but can also be punished by execution. How that applies to transgender people remains unclear, but some Pakistani courts and Muslim clerics have said a transgender person may marry as long as the two partners have different gender expressions.

Still, some public figures have strongly backed down against the expansion of transgender rights.

“The West has pressured Pakistan to promote vulgarity,” said Qari Bashir Qadri, a Muslim cleric in Karachi, adding, “but the country’s Muslim population will not allow the conspiracy to attack the country through such measures. into a liberal country.”

Mushtaq Ahmed Khan, a lawmaker from the country’s Islamist party, said on the Senate floor in May that the transgender rights law violates Islamic precepts and “will be destructive to the family system.”

After the US Embassy in Islamabad posted on Twitter in May in support of “the human rights of the LGBTQI+ community”, a student group of the Islamic party responded in a tweet that Pakistan “knows well how to protect its values, so the US and all like-minded people should never dare cross its borders.”

Yet a younger generation of transgender Pakistanis associated with the global rights movement is louder and more ambitious than its predecessors. Nisha Rao, 29, one of the first transgender lawyers in Pakistan, said that by pursuing higher education, she is effectively fighting the discriminatory perception of the community in society.

“It’s the education that makes the difference and helps the community fight the harsh perceptions about them,” she said.

A transgender person, Reem Sharif, joined the Rawalpindi Police Force as an adviser. dr. Gill has been described as the country’s first transgender doctor.

Pakistan’s 2018 law “was a big step forward,” one that most of the world has not yet taken, said Maria Sjödin, the acting executive director of OutRight Action International, a nonprofit targeting global LGBTQ youth. rights.