In Shanghai, an increase in the number of cases is raising fears of a new lockdown. 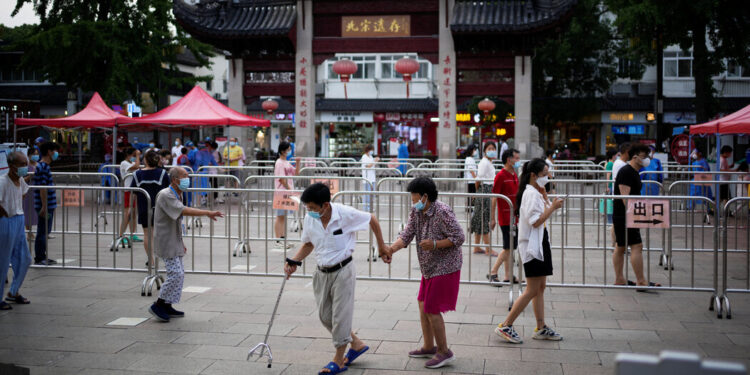 Barely six weeks after Shanghai completely lifted a lengthy and strictly enforced lockdown, China’s largest city is once again grappling with a spate of coronavirus cases. Residents fearful of being suddenly locked in their homes have been alarmed by mixed messages from official sources circulating on social media, including advising them to stock up on food and medicine.

Since the beginning of this month, Shanghai has registered more than 400 infections in the city, many of which have been traced to a cluster in a karaoke bar. Authorities in the city have closed residential buildings where cases and close contacts have been identified, while a dozen of the city’s 16 districts have ordered residents to conduct two PCR tests within three days this week.

Residents expressed concern that the surge could trigger another lockdown in the city, such as the two-month lockdown in May and June that closed businesses and schools, bringing life to a standstill. Public concern grew with reports, including in the Health Times, a Communist Party newspaper, that two housing committees in Shanghai had sent residents “friendly reminders” to stock up on food and medicine for 14 days, just in case apartment buildings. would suddenly shut down.

The city government took action to assure the public that there was no plan to impose a citywide lockdown. But some residents remained skeptical.

“The government has lost public confidence,” said Norah Liu, a Shanghai tech industry worker. “Whatever they are going to do, I have enough basic food at home to survive for a month.”

Forced labour. Mining companies in China’s western Xinjiang region are taking on a bigger role in the supply chain behind the batteries that power electric vehicles and store renewable energy. But their ties to forced labor could create problems for industries that rely on materials from China.

City officials said at a news conference Monday that more than 300,000 people have been screened or placed in centralized isolation facilities. China’s strict approach to eradicating coronavirus infections relies heavily on quarantines and isolation: anyone who tests positive or is considered close contact will likely be locked up in a facility or home.

To cope with the increasing number of people at risk of spreading the virus, Shanghai has reopened at least one isolation facility for Covid patients that had been used during the spring outbreak, according to Caixin, an influential news magazine.

The city’s measures are already being criticized for being excessive. Some residents complained that they were categorized as “secondary close contacts” by health professionals simply because they had been in the same mobile messaging chat group as people who tested positive.

The local health agency admitted that when tracing contacts around the cluster of karaoke bars, workers cast a large net to stop the spread of infection, and apologized for the inconvenience.

Elsewhere in China, the Omicron variant and its BA.5 subvariant are slipping through the country’s many defenses, challenging the leaders’ push to eradicate infection. The city of Lanzhou in northwestern China has locked its population of about 4 million for a week as of Wednesday after registering 122 cases in the past week.

At the same time, local officials are under pressure to revive the economy dragged down by Covid controls. In a sign that Beijing is concerned about controlling the costs of Covid testing, China’s health authority said local governments were no longer required to test certain imported goods. Officials had previously blamed contaminated packaging of imported products for the spread of the virus, although studies show that transmission of the virus through packaging is extremely rare.