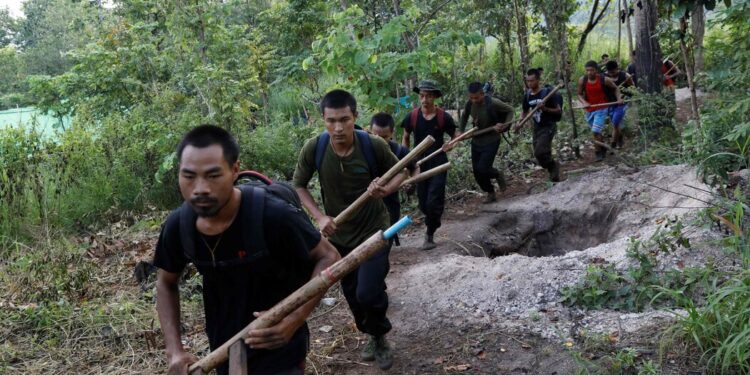 The unity government claims that at least 14,890 soldiers of the regime have been killed in the fighting, while it has lost only 1,000 fighters. The regime refuses to talk about the number of victims. But earlier this year, the junta acknowledged that more than one military-appointed district administrators were being killed every day. There are almost as many injured. Many were shot in their homes or offices; a resistance group claimed responsibility for shooting a district administrator while he was flying a kite.

“We are witnessing the people’s revolution in which everyone participates and makes history together,” said Duwa Lashi La, acting president of the unity government, last month.

Zachary Abuza, a professor at the National War College in Washington, said the People’s Defense Force has done surprisingly well on the battlefield, improving its arsenal by capturing weapons.

As the war in Ukraine continues to drain Moscow’s resources, the Tatmadaw will find it more difficult to obtain weapons, ammunition and replacement parts from Russia, a major supplier. The Tatmadaw has been unable to contain the rebels and has mounted ongoing attacks on the civilian population, Abuza said, including burning villages and carrying out relentless bombing campaigns.

“The reliance on arson, indiscriminate artillery fire and air strikes indicates a loss of ground control,” he said. “The Tatmadaw is experiencing an unprecedented amount of casualties and apostates. They now have to fight and defend supply lines in places that were previously safe.”

He added: “I think we are looking at a long stalemate.”

Local resistance units are not the only ones committing murders. In recent weeks, armed groups associated with the regime have stepped up their own campaign of targeted killings. According to the National League for Democracy, which shared power with the military before the coup, at least 18 of its members and supporters have been killed by regime-backed groups since late April.