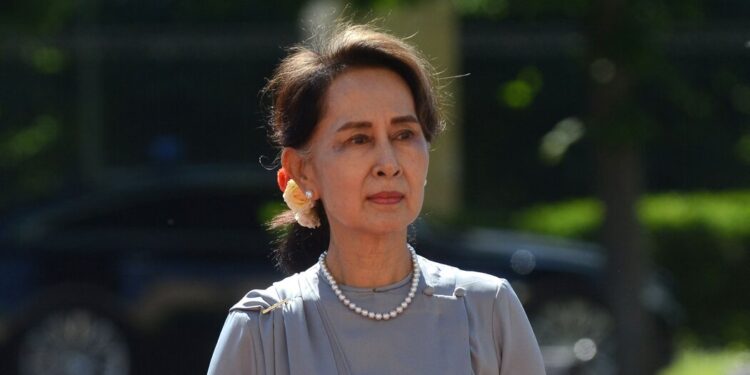 Myanmar’s ousted civilian leader Daw Aung San Suu Kyi is being held alone in a prison cell measuring about 60 square meters. Daytime temperatures can exceed 100 degrees Fahrenheit, but there is no air conditioning. When it rains, which it often does, water splashes in through uncovered windows, according to two people who know about her situation.

For the foreseeable future, this is the life of the 77-year-old Nobel Peace Prize winner and once a democracy icon. On Monday, a special court appointed by the military regime that detained her last year sentenced Ms Aung San Suu Kyi to four corruption counts and added six years to her sentence, one of the people said.

She served for 11 years on half a dozen counts.

Ms. Aung San Suu Kyi, who held the position of state adviser, was forced from office by the military and placed under house arrest in February 2021. In June, she was sent to a prison in Naypyidaw, the capital, after a courtroom was built there for her trials.

Allies bring her food and white and brown clothes so she doesn’t have to wear the lice-infested uniforms given to prisoners. Female staff come to her cell and taste her prison food to show her it’s not poisoned, the two say people with knowledge of her situation, who spoke on condition of anonymity for fear of reprisals.

Ms. Aung San Suu Kyi is one of more than 15,000 people arrested for opposing military rule, with 12,000 more in custody, according to the Assistance Association for Political Prisoners.

Many have been tortured in interrogation centers and convicted by military courts after brief trials where defense lawyers and the public have been barred. Convicted prisoners are often transferred to remote prisons, causing additional hardship for them and their families, said U Aung Myo Kyaw, spokesman for the political prisoner group.

He compared Myanmar to the closed, repressive society of North Korea under dictator Kim Jong-un. “Anyone in Myanmar can be arrested at any time, even if they are not involved in politics,” he said.

After the hanging of four pro-democracy activists last month, including popular activist U Kyaw Min Yu and former hip-hop artist and elected MP U Phyo Zeya Thaw, the regime has promised more executions. More than 70 political prisoners have been sentenced to death since the coup.

Journalists have also come under more intense scrutiny. At least 55 journalists are now detained, according to the human rights organization Detained Journalist Information Myanmar. Last month, reporter Ko Maung Maung Myo of the independent Mekong News Agency was convicted of violating the counter-terrorism law and sentenced to six years for possessing photos and interviews with a local guerrilla group.

And Japanese documentary filmmaker Turo Kubota, 26, who is traveling on a tourist visa, was arrested after covering a protest. He faces seven years for inciting public unrest and violating immigration rules.

The junta recently began cracking down on conduct it deems inappropriate and arrested two known models for posting explicit videos to the subscription website OnlyFans and a similar site, Exantria.

The junta said the videos could harm Myanmar’s “culture and dignity” and “without the modesty that should be maintained by Myanmar women,” state media reported. The models risk up to 15 years in prison.

One of the models was Nang Mwe San, a former doctor whose medical license was revoked before the coup for posting pictures of herself in bikinis and lingerie on Facebook. More recently, she criticized the junta for confiscating her passport — along with other celebrities — as she prepared to take her father to Bangkok for medical treatment. He died shortly afterwards.

Thinzar Wint Kyaw, a popular model, actress and singer with 1.6 million Instagram followers, was also arrested. The regime said it would continue to hunt online for others who offend the modesty the regime now demands from citizens.

Human rights lawyer U Kyi Myint said the regime presented itself as protecting traditional morals in the deeply Buddhist country, even as soldiers slaughtered civilians and raped women. “All dictators use religion and culture as a weapon to arrest people, so this is no surprise,” he said.

In the prison in Naypyidaw, Mrs. Aung San Suu Kyi kept isolated from other inmates when not present at her trials. In court, she has 30 minutes to meet with her lawyers and co-defendants. Her trials have been closed to the public and the court has banned her lawyers from talking about her publicly.

She is reported to be in generally good health, but she has developed scabies and has lost weight since being in prison. Mosquitoes plague her in her cell. But she would take her situation calmly.

She also gets special treatment.

Prison officials, apparently afraid something might happen to her while on watch, went to extraordinary lengths to care for her.

Her cell is unusually large for just one inmate, especially in Myanmar’s overcrowded prison system.

Three female employees are assigned to care for her and provide security. In addition to tasting her food, they are on standby at any time to help her. While many inmates are without medical care, even when confronted with life-threatening illnesses, a doctor visits her weekly.

The four corruption charges against her, decided Monday, focused on land and construction deals linked to the Daw Khin Kyi Foundation, an organization Ms Aung San Suu Kyi founded on her mother’s behalf and which she led to her arrest.

The court ruled that she negotiated reduced payments to the government from the foundation worth more than $13 million. The court also ruled she broke the law when the foundation raised nearly $8 million from foreign donors and spent it on projects that were not originally advertised.

Defenders say the charges against her were fabricated to silence her.

Ms. Aung San Suu Kyi is used to spending long periods in seclusion. Of the past 33 years, she has spent 17 in detention, mostly under house arrest. Now she faces the possibility of spending her remaining years in custody.

With Monday’s convictions, she was convicted on 10 counts and sentenced to a total of 17 years in prison. Nine more lawsuits are pending with a possible maximum sentence of 122 years in total.