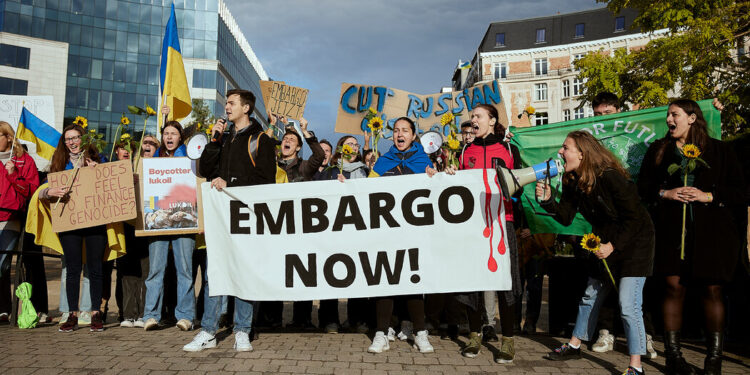 BRUSSELS — Emmanuel Macron, the president of France, had just finished speaking at a major conference on Europe.

As he lingered on stage, enjoying admiration and taking pictures with fans, little did he know that two young women in the back of the room were watching him closely.

“There are no metal barriers,” whispered Dominika Lasota. “This is our chance.”

She and her activist comrade, Wiktoria Jedroszkowiak, rose quickly. They clicked on a camera. They marched straight to Mr Macron, who greeted them with a charming smile, apparently thinking they just wanted a selfie.

But then they shot at him with questions about a controversial new pipeline in Uganda (which the French oil company Total is helping build) and the war in Ukraine.

“My point is…” Mr Macron tried to say.

“I know your point,” Mrs. Lasota, 20, said, interrupting him. “But we live in a climate crisis and you have to stop it.”

Ms. Jedroszkowiak, also 20, then jumped in and said, “You can stop the war in Ukraine by stopping buying fossil fuels from Russia.”

“Yes,” Mr Macron muttered, before being overwhelmed by a host of other questions.

Even weeks later – this happened in May in Strasbourg, France – the two activists are still giddy about that confrontation. Ms. Lasota and Ms. Jedroszkowiak have emerged as leaders in a dynamic new wing of the anti-war movement, and the video of them giving Mr Macron’s lecture went viral, turning them into celebrities for a moment in France and in Poland, where they come from.

This is a different kind of activist – young, mostly female and mostly from Eastern Europe – who believes that the war in Ukraine is a brutal manifestation of the world’s reliance on fossil fuels. They have joined two causes – anti-war activism and climate change – to take full advantage of this moment when the world’s attention is focused on Ukraine. And to make their case, they confront European leaders face-to-face.

They circulate across the continent, ride trains, stay in cheap hotels, feed on cornflakes and almond milk and try to corner Europe’s top politicians and businessmen. While they may not be as famous as Greta Thunberg, they’re cut from the same sturdy fabric and work closely with her Fridays for Future movement.

Their message, which Ms Thunberg and Ms Lasota emphasized in a recent video, is that humanity’s addiction to fossil fuels leads to misery and bloodshed. They refer not only to Russia, but also to Saudi Arabia, Venezuela and other petro-states with a long history of conflict and repression.

“These things are connected,” Ms Thunberg said. “More and more fossil fuel expansion means more power for autocrats. This allows them to start wars like the one in Ukraine.”

None of these activists were happy with the European Union’s recent moves to embargo Russian coal and most Russian oil by the end of the year — they now want a total embargo on all Russian energy, which they say would cost Russia billions of dollars. starve and shut down his war machine in eight weeks.

It is a huge demand with far-reaching implications that few European politicians dare to raise publicly, let alone embrace. Many people around the world believe that it is simply not possible to simply move away from fossil fuels. Eighty percent of global energy still comes from them. And Europe is closely linked to Russian fossil fuels in particular, especially natural gas.

But more environmental groups are calling for the same sweeping embargo. They are alarmed that Europe claims it is backing Ukraine while continuing to buy billions of dollars of Russian fuel, helping Russians achieve record profits while their military slaughters civilians and commits other atrocities in Ukraine. Energy experts agree that something else needs to be done.

“The activists are right that the Russian invasion of Ukraine should be a reminder of the urgency to move away from fossil fuels,” said Jason Bordoff, dean of the Columbia Climate School. “But the harsh reality is that if Europe wants to eliminate dependence on Russia, it will need alternative sources of oil and gas for a period of time as it transitions.”

Ms Lasota and Ms Jedroszkowiak say the only solution is to accelerate the transition to renewable energy sources, such as wind and solar, and that until then, more Ukrainians will die needlessly. They have staged protests across Europe, confronting not only Mr Macron, but also Mateusz Morawiecki, the Polish Prime Minister; Roberta Metsola, the President of the European Parliament; top business people, including shareholders of Total; and Ursula von der Leyen, the president of the European Commission, who seemed impressed.

Since then, the European Union has met endlessly over sanctions against Russia. European leaders have planned a new summit in Brussels at the end of May. Ms. Lasota and Ms. Jedroszkowiak saw it as the perfect opportunity to ‘hijack attention’.

Born one month apart and from Polish middle-class families, Mrs Lasota and Mrs. Jedroszkowiak met two years ago at an activist summer camp in Poland, where they learned how to be arrested peacefully and form human blockades.

The two recently took advantage of those skills by joining a blockade outside Total’s headquarters in Paris. Now they arrived in Brussels to organize a series of ‘actions’ planned for the EU summit.

They checked into a transit hotel near Brussels South Station. While Ms. Jedroszkowiak was sitting on the floor of their small room, wearing headphones and hosting a radio show for a new Polish outlet, Ms. Lasota was sitting at a desk writing an email to Charles Michel, the President of the European Council.

“She’s the cool one and I’m the serious one,” Mrs. Lasota laughed as she typed.

“No,” Mrs. Jedroszkowiak corrected her. “We’re both cool and serious.”

The next morning, at Greenpeace’s Brussels office, more than a dozen other activists showed up, most in their early 20s, some in their teens. They gathered around a table filled with cereal, coffee cups, and glowing laptops.

Their mission: to hold a vociferous anti-war event on Schuman Square, in front of the European Commission’s headquarters, on the eve of the big rally.

“What do we need for the strike tomorrow?” asked Mrs. Jedroszkowiak.

“Sunflowers,” someone said. (Sunflowers have become a symbol of the war in Ukraine.)

“Cardboard,” came another one.

“Paint,” someone else said.

Many of the activists came from Moldova, the Czech Republic, Poland and even Ukraine. Eastern Europeans tend to have a deeper, more intuitive connection to Ukraine’s suffering than Western Europeans, Ms Lasota said.

“Honey, we come from such different contexts,” she explained. “I come from a country that hasn’t existed for 200 years. Countries near us have just divided our nation and taken our resources and land. For us, the war in Ukraine is easy to understand and easy to feel.”

Ms. Jedroszkowiak agrees. For example, she said some German environmentalists were more concerned about the economic effects of the embargo than she had anticipated.

“I was like, wait, are you serious?” she said. ‘You’re talking about the economy? And money? That is the language of lobbyists, not activists.”

Officials in Germany, Europe’s largest economy, have said they could lose half a million jobs if they suddenly banned Russian gas, which powers many German industries.

Ms Jedroszkowiak’s response: “We can create green jobs. That’s the whole point. We have to change the whole system.”

Most of the young people sitting around the table were women, which Ms Jedroszkowiak said was no coincidence either.

“What is this beautiful young girl doing in the Polish parliament?” I’ve heard that all my life. I heard it was 14, and I still hear it when I’m almost 21,” she said. “And when you face that injustice, an anger grows in you. And you start to see that all these injustices come from the same place: rich men who won’t admit they’re wrong.”

“And what else do we need?” she asked. “As a Polish survivor from Auschwitz once said,” she added, referring to noted historian Marian Turski, “Auschwitz didn’t come out of the blue. Well, wars don’t just fall out of the sky.”

“People like to say that wars break out,” she continued. “Wars don’t just ‘break out’. Wars are the result of a political system designed for war.”

‘Chaos on the table’

The next morning, the day of the big event on Schumanplein, Greenpeace’s front door kept opening. Young activists skimmed past each other, dragging sunflowers, placards and megaphones.

“I’m really excited about all the chaos on the table,” said Pavel Rysula (17) from Prague. He was one of the few young male activists at the rallies.

With their iPhones and train tickets, they have built their own fluid community. Although many have dropped out of formal education, they read essays on social justice, research the latest climate science, and write letters and papers all the time (for world leaders, not teachers). They also have fun.

“We scream. We sing. We’re dancing,” Mrs. Lasota said. “Nothing gives you more energy than this work. It’s the closest to the love I’ve gotten in my life.”

But as with everything, there is a cost involved.

Both Ms. Lasota and Ms. Jedroszkowiak recently dropped out of university programs in Warsaw, putting pressure on their families.

“My mother said she was terrified of me,” said Mrs. Jedroszkowiak. “I was like, Mom, I’m not a drug addict or going to war. Do not be afraid.”

Ms. Lasota said many childhood friendships simply “disappeared”. One of her friends was so hurt by a missed birthday party that they haven’t spoken to each other since.

“It’ll be all right in the end,” Mrs. Lasota said with a sigh.

A few hours before the action for the European Commission, the skies opened. People huddled in the parks of Brussels under the eaves of rain-ravaged gazebos. As they walked through the streets, the protesters got soaked.

When they reached Schumanplein, they found it almost empty. Still they went on, shoulder to shoulder in a row, hoisting their sunflowers and their plates.

“Even if it rained, even if it snowed today, even if there was a storm today, we’d come here,” exclaimed Mrs. Lasota, to the rhythm of an experienced orator. “Because we will do everything we can to end this bloody embargo and stop the horror happening in Ukraine and around the world.”

The next day, EU leaders did not touch on the issue of Russian gas, but agreed to embargo about 80 percent of Russia’s oil. The activists considered it a mixed success.

“A catastrophe was avoided,” said Ms. Lasota. “But to celebrate this as a great achievement, that’s ridiculous.”