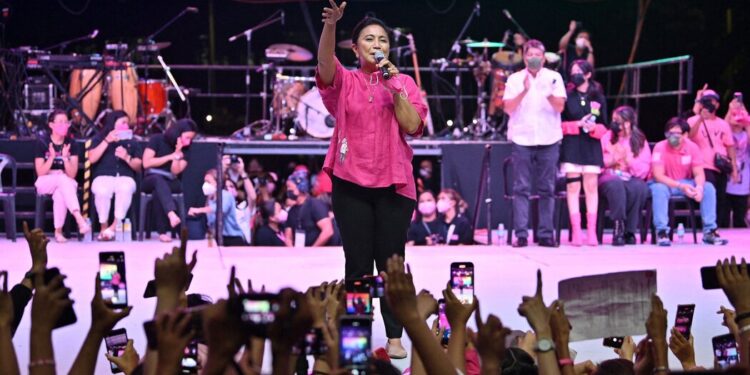 QUEZON CITY, Philippines – Leni Robredo, the outgoing vice president of the Philippines, acknowledged her loss in one of the most sweeping presidential elections in the country’s history on Friday, urging her supporters to accept the vote. and continue to fight disinformation.

At a meeting at Ateneo de Manila University, where thousands of her supporters had gathered, Ms. Robredo the apparent winner, Ferdinand Marcos Jr., the son and namesake of the country’s late dictator.

Protests against Mr Marcos erupted after preliminary results on Monday night showed he had won by the largest margin in more than three decades. But the election was marred by complaints about vote-buying and broken counting machines.

Ms Robredo said her team is still investigating reports of voter fraud, but stressed that “as the picture becomes clearer, we have to accept that the results of the election did not go according to our plan.”

“We have to accept the decision of the majority,” she said. “I beg you to join me in this matter.”

Ms. Robredo went on to criticize the “huge machinery of spreading hate and lies”, without elaborating further. “This has stolen the truth, just as it has stolen our history and future,” she said.

Disinformation is not unique to the Philippines, but it has flourished in recent campaigns. The results of this election show how the Marcos family has managed, at least in part, to rename its legacy. It has told Filipinos to “move on” with their sordid past, highlighting that Ferdinand E. Marcos’s violent 20-year rule was marked by dozens of infrastructure projects and strong economic growth.

“I will devote all my energy to fighting lies,” said Ms. Robredo. “And I ask you to join me in this fight.”

Many of the young supporters in the crowd cried when they saw her take the stage. In the months leading up to the election, hundreds of thousands of them had set up an unprecedented grassroots movement, going door-to-door campaigning for the only woman in the race. Her supporters saw her as the antithesis of Mr. Marcos and praised her as a leader with a track record of change.

The comments from Mrs. Robredo came after her running mate, Senator Francis Pangilinan, who was running for vice president, told supporters that “the battle is far from over, especially as lies and deceit are gaining ground.”

While Ms. Robredo made no formal concessions, her comments acknowledged her almost certain defeat. The official results of this week’s elections are expected by the end of the month.

Understand the Presidential Election in the Philippines

A consistent election. Ferdinand Marcos Jr., the son and namesake of the former Philippine dictator, appeared to win a landslide in a divisive presidential election, raising deep questions about the future of Southeast Asia’s oldest democracy. Here’s what you need to know:

A Marcos returns to power. Mr. Marcos, known by his childhood nickname “Bongbong,” has spent his political career rehabilitating the family name. His overwhelming victory heralds a remarkable revival in 36 years after the family was impeached for looting billions of dollars from the treasury.

Ensuring democracy. Mr Marcos won the support of millions of voters who have become disillusioned with democracy amid widespread poverty and rampant corruption. His victory is likely to lead to a further erosion of democratic institutions in the Philippines, already weakened under outgoing leader Rodrigo Duterte.

A divided people. For other Filipinos, the Marcos family name remains a synonym for excess and greed, and a painful reminder of his father’s atrocities. That will present Mr Marcos with a series of challenges as he takes presidency.

On Thursday, President Joe Biden and Chinese leader Xi Jinping both congratulated Marcos. His victory marked a remarkable comeback for a family forced out of the country 36 years ago after millions of Filipinos poured into the streets of Manila in peaceful protests known as the “People Power” uprising.

Mr Marcos’ critics say they fear that democratic standards will continue to erode under him.

But Mrs. Robredo ended her speech on a hopeful note. She said she would create a non-governmental organization dedicated to helping the marginalized with “the broadest volunteer network in our country’s history.”

Ms. Robredo acknowledged that while her supporters were upset about the loss, “What I’ve learned from difficult situations is that healing doesn’t come when you sulk on your own. It comes when you start to focus on other people.”

“Allow yourself to cry,” Mrs. Robredo said. “But if you’re ready to wipe your tears, get ready, strengthen your heart, because we’ve got work to do.”