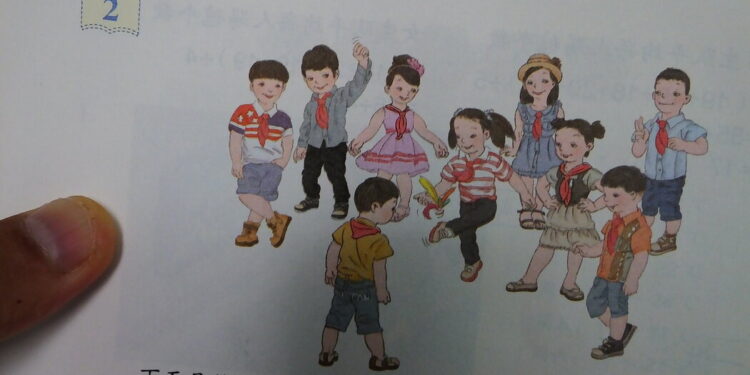 HONG KONG — A little boy pulling up a girl’s dress. Another grabbed a classmate from behind, his hands on her chest. Bulges stick out of the pants of male students. Suspicious pro-American images.

The illustrations can be found in math books from a Chinese state primary school publishing house – books that have been used for years. They caused a stir in China after being flagged on social media as abusive, sexualized and anti-China by angry commentators last week.

The controversy has prompted the textbook publisher to apologize. China’s Ministry of Education initially said it ordered an inspection of illustrations in primary and secondary school textbooks. Then, on Monday, as anger spread online, the ministry announced a sweeping nationwide survey of all primary, secondary and university textbooks.

“The identified issues will be addressed immediately and those responsible for violations of disciplines and regulations will be held heavily accountable,” the ministry said Monday. “There will be zero tolerance.”

Tang Jiafeng, an education writer, wrote on Weibo, a Chinese microblogging platform, that he was “shocked, incredulous, sad and angry” at the math book’s illustrations.

“Elementary school textbooks are the foundation of the country and nation, and an important guarantee for shaping children’s outlook on life and values,” he wrote. “It is impossible to overestimate their importance.”

He pleaded not only for corrections and apologies, but also for an investigation and for addressing those responsible.

The outcry at what some considered lewd and otherwise offensive graphics in math books intended for impressionable minds comes as China tightened its grip on ideological content and sensitive history in textbooks. Universities have been ordered to highlight the study of Marxism and the writings of China’s top leader, Xi Jinping. In 2015, Yuan Guiren, China’s education minister, ordered a closer examination of foreign textbooks, saying that books promoting Western values ​​should be banned from the classroom.

According to Chinese news reports, the math books published by the People’s Education Press, a large state-owned enterprise controlled by the Ministry of Education, have been around for about a decade. The illustrations were approved in 2013 for first through sixth grade students, the reports said. How the problematic drawings escaped scrutiny all these years is unclear. Some social media users highlighted the images last week, prompting parents and educators to express their outrage.

People’s Education Press gave no explanation for the selection of the illustrations. But they were attributed to the studio of an artist named Wu Yong, who was attacked online and accused of harming China. The artist, who could not be reached for comment, has not publicly raised the controversy.

Some drawings are strange or silly, like children sticking their tongues out. But others show children appearing to grope classmates on a playground. Another showed a schoolgirl with bare underwear playing a game. Many critics said the drawings made the children look ugly, with wide, drooping eyes.

Others argued that the textbooks also contained anti-Chinese messages, such as a misrepresented Chinese flag. Still, some reportedly found pro-foreign depictions, such as a boy flying in a biplane, to be similar to Japanese and American planes. Some even pointed to images of children wearing clothes with what appeared to be stars and stripes in the colors of the American flag.

“As a father of a child, I’m honestly really concerned,” Li Yuguo, head of the sports institute at Beijing Oriental University, wrote on Weibo.

“For a child who is just entering school to come across such an illustration, imperceptibly receiving this kind of unhealthy influence from an early age,” he added, “this is not a matter of art; it is about education, culture and even infiltration abroad. There is no small matter when it comes to children, it affects our future.”

Responding to the public anger, the publisher initially said only that he was reviewing his textbooks.

“We’ve organized experts to study them carefully and humbly take in good opinions and suggestions from all walks of life,” the company said in a statement. “We started by redrawing the covers and some illustrations of the relevant math books to improve the painting method and increase the artistry.”

But the criticism only grew. Two days later, the publisher apologized.

“We have seriously thought and feel deep self-blame and guilt, and hereby offer our deepest apologies,” it said, adding that it would find a new team of illustrators to redraw the math books.