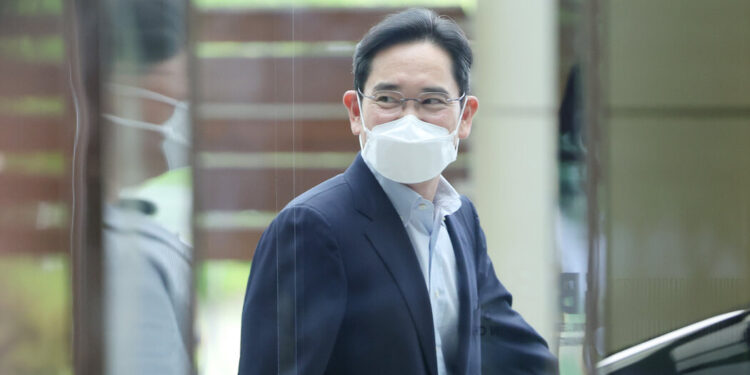 SEOUL – President Yoon Suk-yeol on Friday pardoned Lee Jae-yong, the de facto head of the Samsung conglomerate, who was serving jail time after he was convicted of bribing one of Mr Yoon’s predecessors.

mr. Lee was released on parole last August. The pardon gives him free rein to lead Samsung as it ends what had been a five-year ban on his return to management. But many South Korean business analysts believe that Mr. Lee had continued to control his empire through loyal subordinates, though Samsung never explicitly confirmed that.

mr. Lee was one of nearly 1,700 people who were pardoned by Mr. Yoon, most of whom had been convicted of white-collar crime and traffic violations. South Korean presidents often give mass pardons on major holidays, such as National Liberation Day, which falls on Monday, when the pardon takes effect.

“I hope this special grace will become an opportunity for the people to join forces to help overcome the economic crisis,” Mr Yoon said at a cabinet meeting on Friday. He said many small business owners were among those who were pardoned.

Samsung is the most successful of the handful of family-owned businesses known as chaebol that helped South Korea become a global export power and still dominate the economy. The Samsung Electronics unit alone accounts for nearly one-sixth of the country’s total exports.

Mr. Lee, also known as Jay Y. Lee, was convicted of bribing then-President Park Geun-hye to obtain government support for a merger of two Samsung subsidiaries. Ms. Park was impeached in 2016 on bribery and other corruption charges, and eventually went to jail herself before being pardoned and released in December.

mr. Lee was in the midst of a two-and-a-half-year sentence when he was paroled last year. Another tycoon, Lotte Group chairman Shin Dong-bin. was given a suspended sentence on charges related to Ms. Park, and was also pardoned Friday by Mr. Yoon, who earlier this year promised a business-friendly government as a presidential candidate.

Mr. Yoon, a former prosecutor, was a leading member of the investigative team whose work led to the conviction of Mr. Lee and Mr. Shin.

In South Korea, there is a long history of chaebol leaders being convicted of graft-related crimes and later receiving presidential pardons, usually on the grounds that the country needs them. Anti-corruption activists have long argued that such clemency helps entrench corruption in South Korean politics.

An opposition MP, Park Yong-jin, said on Friday that Mr Yoon had confirmed the widespread belief that “you are free when you are rich, but guilty when you are poor”.

But corporate groups have lobbied tirelessly for such pardons, arguing that the economy would benefit if chaebol leaders were free to run their empire. Recent public polls showed that a majority of South Koreans supported a pardon for Mr Lee. In recent days, Mr. Yoon has seen his approval ratings fall below 30 percent, an unusually poor performance for a South Korean leader who took office so early.

Although Lee’s title is vice chairman, he began running South Korea’s largest and most lucrative conglomerate in 2014, when his father, Samsung chairman Lee Kun-hee, was incapacitated by a heart attack. The older Mr. Lee passed away in 2020.

“I am sincerely grateful for this opportunity to make a fresh start,” Mr Lee said in a statement released via Samsung on Friday. “I will respond to people’s expectations and the government’s thoughtful consideration by contributing to the economy through continued investment and job creation for young people.”

South Korea faces increasing uncertainty over its economy and national security, caused in part by the war in Ukraine, rising tensions between the United States and China over Taiwan, and North Korea’s growing threat of nuclear weapons.

South Korean news outlets said the pardon could encourage Mr Lee to succeed his late father as chairman of Samsung and to be more active in addressing the challenges the company faces, at a time when the global chip industry is growing. is making efforts to address the shortages caused in part by the Covid pandemic.

Samsung, a global leader in the chip industry, also has to deal with US pressure on South Korea to join a US-led semiconductor supply chain and with increasing competition from China, which is aggressively investing in its own semiconductor industry.

mr. Lee’s legal troubles aren’t over yet. He faces separate criminal charges for stock price manipulation and unfair trading. mr. Lee has said he is innocent.