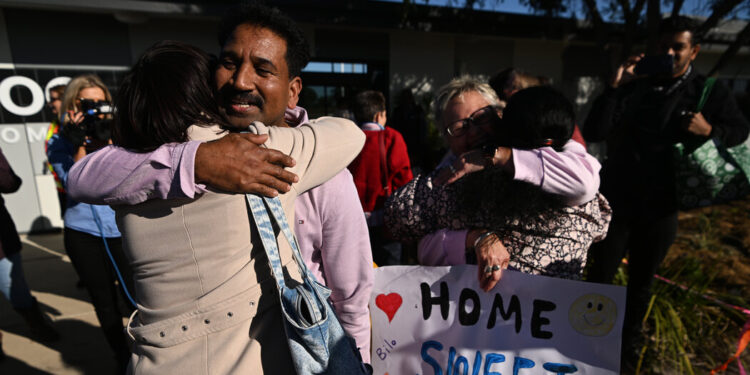 MELBOURNE, Australia — Four years ago, immigration officers arrived at dawn to tear a Sri Lankan family away from the life they had built in the small Australian town of Biloela.

Authorities had rejected asylum applications submitted by mother, Kokilapathmapriya Nadesalingam, and father, Nadesalingam Murugappan, who had fled Sri Lanka. Their visas had expired and the couple, along with their two Australian-born daughters, Kopika, 2, and 9-month-old Tharnicaa, were placed in immigration detention.

While the Conservative government tried several times to deport them to Sri Lanka, their supporters campaigned for their release. They turned the family into symbols of what human rights groups called a draconian approach to asylum seekers and refugees in Australia.

On Friday, the center-left government, which came to power two months ago, called off the fight by allowing the family to remain in Australia permanently. Human rights groups expressed the hope that the move marked the beginning of a more tolerant approach to asylum seekers.

Immigration Minister Andrew Giles said in a statement that the decision to grant permanent residence “follows careful consideration of the complex and specific circumstances of the Nadesalingam family.” He added that the government would continue to intercept and return all asylum seekers boats traveling to Australia to their place of origin.

Prime Minister Anthony Albanese had indicated in June as the government prepared its decision that the family had cause for hope.

“We are a generous nation,” he said at the time. “We are a better nation than a country that takes two little girls born here in Australia from their homes in the middle of the night and shuffles them to Melbourne and then sends them to Christmas Island and holds them for four years. at the expense of double-digit millions of dollars of taxpayers.”

Unlike the United States, Australia does not automatically grant citizenship to children born in the country, and the two girls do not qualify as children of “illegitimate maritime arrivals.”

The parents, who only met after traveling to Australia, are members of Sri Lanka’s Tamil minority and had fled the violence in their homeland, where civil war raged for decades before ending in 2009.

They left Sri Lanka a few years later and ended up in Biloela, before being detained and sent to a detention center in Melbourne for a year and then transferred to remote Christmas Island, 1,000 miles north of the Australian mainland, where they for three years.

The family’s two girls, Kopika, now 7, and Tharnicaa, now 5, were the only children held in immigration detention in Australia. They went to school on the island accompanied by guards.

Calls for the family’s release gained momentum last year when Tharnicaa was evacuated to a hospital in the Australian city of Perth as she struggled with a blood infection. Supporters of the family said she was only on painkillers for nearly two weeks as her fever rose, despite pleas from her parents.

In the run-up to the federal elections in May this year, the future of the family became a theme in the campaign. The incumbent conservative Liberal Party promised not to let the family stay permanently, stressing that her asylum application had been reviewed and rejected several times.

The Labor Party largely reflected the Liberal Party’s harsh immigration policies and vowed to continue the policy that asylum seekers arriving by boat would never settle in Australia. But it did promise that it would allow the family to return to Biloela if elected.

The party made good on that promise a few days after the victory in May by granting the family temporary visas. Now it has given them permanent residency, resolving their status for good.

“At last we feel peace,” Ms Nadesalingam said in a statement. “Now I know that my daughters will grow up safely in Australia. Now my husband and I can live without fear.”

Karen Andrews, speaking on behalf of the Liberal Party on Home Affairs, said in a statement that the decision “undermines the policy that if you come here illegally you will never settle in Australia.”

Graham Thom, refugee coordinator for Amnesty International Australia, said he hoped there were signs of a gradual shift towards a more humane approach to asylum seekers.

Australia’s refugee policy is unlikely to change significantly under Labour, which is aware it is being attacked by the Conservative opposition as being weak on its borders, Mr Thom said. But even without a change in general policy, Australia’s immigration minister has wide discretion – what some call “God powers” – to decide the fate of those seeking asylum.

Refugee rights advocates “hope this is a signal of a more common sense, a more humane approach to some of these individual cases where people have been here for a long time and have ties to the community,” Mr Thom said.