The Supreme Court says it will weigh in on the crisis in Pakistan on Monday. 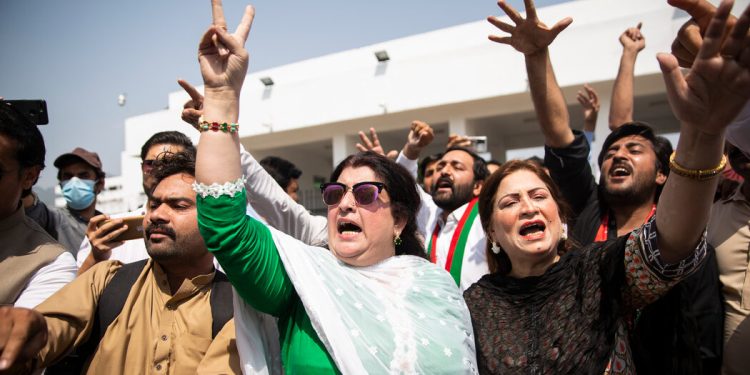 Hours after Prime Minister Imran Khan declared the National Assembly dissolved on Sunday, preventing a vote of no confidence that seemed certain to oust him, opposition leaders challenged the move before Pakistan’s Supreme Court.

The Supreme Court said it would consider their request Monday. The court could declare Mr Khan’s move illegal and allow the vote to go ahead.

Should that happen, it is far from clear what Mr Khan would do next.

Some analysts in Pakistan speculated that he could have opposition members arrested as part of what he claims is a US conspiracy to remove him from office. Mr Khan has led a growing crackdown on dissent and opponents have accused him of attacking opposition members under the pretext of an anti-corruption campaign.

A lawmaker from Mr Khan’s Tehreek-e-Insaf party, Kanwal Shauzab, said arresting opposition members was a “possibility” as long as it was done “in accordance with the law of the country”.

“We are not going after the opposition for no reason. It is what they have done. They must pay for their own actions,” she added.

Such arrests could diminish the majority who seemed ready to oust Mr Khan. But his move on Sunday seemed to risk costing his own supporters. An outspoken legislator of his party, Aamir Liaquat Husain, resigned in protestand joins dozens of Mr Khan’s coalition who have defected in recent weeks.

In an effort to prevent such defections, the interior minister said Tehreek-e-Insaf had the support of Pakistani institutions in dissolving the legislature.t reference to the military, whose support is considered critical to the survival of Pakistan’s civilian governments.

Military leaders appeared to withdraw Mr Khan’s support late last year after a dispute over his leadership. They have maintained that the military remains neutral in the current political crisis.

But an army spokesman denied it was involved in or supported Sunday’s developments. It was the first time military leaders had suggested so openly that they did not support Mr Khan’s request to remain in office. For some, it raised the specter of military intervention – a well-known pattern in Pakistani history – should the political crisis drag on.