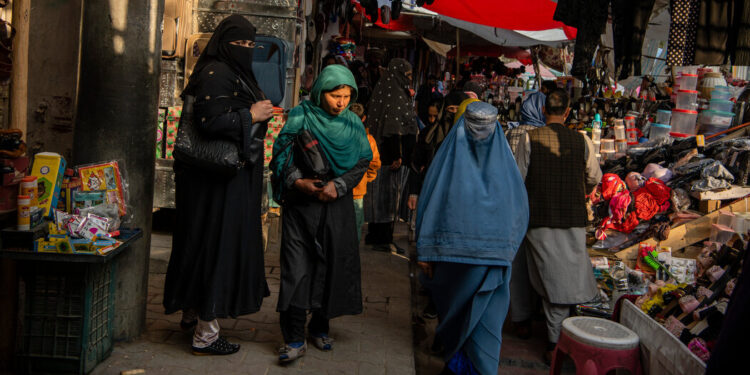 KABUL, Afghanistan – Her mother begged her not to go to the protest, even though Maryam Hassanzada was on her way out.

But Ms. Hassanzada, 24, reassured her mother, then joined a dozen other women who this month protested a Taliban decree requiring Afghan women to cover themselves from head to toe.

With uncovered faces, the women chanted ‘Justice! Justice!” and “Stop tyranny against women!” They protested about 10 minutes before Taliban gunmen rudely broke up the demonstration. The protesters said they were held for two hours by Taliban security officials, interrogated and verbally abused, then released with the warning not to protest anymore.

“If we don’t protest, the world won’t know how much Afghan women are being oppressed,” she later said.

These are perilous times for Afghan women. The Taliban are showing no signs of easing the crackdown, not just on basic rights like education and jobs for women, but on every facet of public life, from deportation to travel.

The cover-up decree, which also urged women to stay at home unless they had a compelling reason to go out, followed an earlier rule that women traveling more than about 75 miles from their home must be accompanied by a male relative.

In August, the Taliban pledged less restrictive policies toward women than they had under their previous administration in the late 1990s. “There will be no violence against women, no prejudice against women,” Taliban spokesman Zabihullah Mujahid told reporters.

Instead, in a matter of months, the Taliban issued tough decrees that dragged women from the relative freedoms achieved over the past two decades to a harsh interpretation of Islamic law that stifled women’s rights.

On the streets of the capital, compliance with the decree is mixed.

In the Dasht-e-Barchi district, home to Hazaras, a predominantly Shia Muslim minority, very few women cover their faces – except for Covid-19 surgical masks. But in nearby Karte Naw, an ethnic Pashtun area that is part of the Sunni majority, most women wear hijabs, or headscarves, that cover their faces.

Some women in Kabul said men in the street harassed and called them names when they appeared in public with their faces uncovered.

Outside the capital, most women seem to obey the decree. Across the country, women say Taliban enforcers have attacked them, sometimes violently, and told them to hide.

In northern Takhar province, Farahnaz, a university student, said religious police had set up checkpoints to inspect rickshaws carrying women to class. Those not covered in all-black hijabs were shaken up and sent home, she said.

“I had a colored headscarf, but they sent me back home and told me to wear a black hijab and niqab,” she said, referring to a piece of clothing that covers the hair and face, except for the eyes. She asked to be identified by her first name only for fear of retaliation.

Anisa Mohammadi, 28, a lawyer in Mazar-i-Sharif in northern Afghanistan, said she bought a burqa because she feared her honor would be called into question if she didn’t wear it. She said the religious police there kept a close eye on women and told them to hide.

In Baghlan province, also in northern Afghanistan, Maryam, 25, a women’s rights activist who has refused to cover her face, said a friend had been warned she would be flogged if she continued to wear only a headscarf.

“I’m afraid,” Maryam said, asking her last name not to be published. “The Taliban have told me I shouldn’t come to the city if my face isn’t covered.”

In Kabul, a 24-year-old university student who wore a headscarf but no face covering to a popular recreational area said she was struck on the head by a rifle butt wielded by a passing Taliban gunman who yelled at her for cover. her face.

Taliban gunmen have pointed weapons at female protesters, pepper sprayed them and called them “whores” and “dolls of the West,” according to Human Rights Watch.

Local news media reported that some female students at Kabul University had been sent home by Taliban enforcers for not adhering to the hijab decree. And Human Rights Watch reported that the Taliban’s religious police were trying to force Afghan women working for the United Nations mission in Kabul.

Muhammad Sadiq Akif, spokesman for the Virtue and Vice Ministry in Kabul, denied that any women had been charged or punished. He said the ministry’s patrols had not forced women to cover up, but only explained the decree to encourage full compliance.

And he denied that women were forced to wear black hijabs, saying they could wear hijabs of any color.

“Out of respect for the sisters of our country, we do not keep, call or punish women,” he said in an interview at the ministry, which replaced the previous government’s Ministry of Women’s Affairs.

“The hijab is the command of God and must be obeyed,” Mr Akif said, adding that the ordinance for women was “for their own protection.”

The decree, ordered by Taliban Supreme Leader Haibatullah Akhundzada, mandated a series of escalating penalties, including jail time, for male relatives of women who repeatedly refused to cover themselves. Mr Akif said some men had been formally warned but not punished.

That pressure was denounced by some women. “My father and brothers have no problem with me,” said Mozhda, 25, a women’s rights activist in Mazar-i-Sharif who has refused to cover her face and has asked to be identified only by her first name for fear of retaliation.

Until the takeover last summer, the Taliban had been out of power for 20 years and many women, especially in cities, were getting used to the more relaxed mores.

“Women are not like the women of 20 years ago, and the Taliban should understand that,” said Fatima Farahi, 55, a women’s rights activist in Herat, western Afghanistan.

Ms Farahi said she and many other women in Herat had refused to cover their faces. So far, she said, she and her colleagues had not been threatened by the Taliban.

In Kabul, the protesters, calling themselves the Afghan Powerful Women’s Movement, pledged to continue protesting and using social media to urge women to ignore the decree.

When Taliban gunmen ordered them to stop a recent demonstration, a protest leader, Munisa Mubariz, shouted: “You can’t stop our voices!”

The women said they had been warned they would face five days in prison if they protest again.

Five Western journalists and two Afghan reporters covering the demonstration were also detained and interrogated separately from the women for two hours, and were later released unharmed.

Mr Akif of the Virtue and Vice Ministry said the women who protested had made a mistake and had been given “the correct understanding” of the decree from Taliban officials.

“It is not allowed to stand up or protest against any form of Islamic ruling and it is considered a crime,” he said. “If they understand and the right way is shown to them, they will never do these things. I’m sure they will obey.”

No way, said Zakia Zahadat, one of the protesters.

“I’ll be back – I won’t stop protesting,” said Ms. Zahadat, 24. “We are dealing with an economic crisis, a social crisis and a political crisis, but the Taliban only care about the hijab? Does this mean that if we wear a hijab, all our problems will be solved?”

Jamila Barati, 25, another protester, said: “Women must fight for their rights, regardless of the risks. I will not stop protesting.”

Several women said their husbands or parents had begged them to stop. The women said they had received threatening calls from Taliban security officials. Some said they moved from house to house to avoid detection.

Ms. Hassanzada said her mother had asked her to stay indoors all the time.

But, Ms Hassanzada said, she has spent most of her time at home since the Taliban fired her from her job at a ministry. After arriving home safely on the day of the most recent protest, she repeated a promise she had made to her mother.

“I said I would never leave the house – except to protest,” she said.