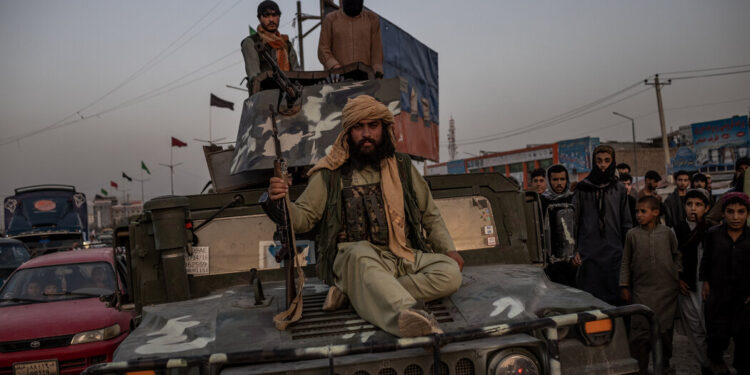 The Americans and their allies left the country, eventually ending their long war after making an agreement with the Taliban, leaving the defense of the country to the security forces they had trained and supplied for years. But the Afghan troops were already beginning to succumb. By the end of the summer, the insurgents had captured dozens of districts, which quickly spread across the countryside as outpost after outpost folded.

But none of the 34 provincial capitals had fallen. Yet.

The United States provided limited air support to the beleaguered Afghan forces below, and small hopes remained that US-sponsored firepower would continue after the United States had completely withdrawn. President Ashraf Ghani had rearranged his military leadership and militia units led by Afghanistan’s powerful and infamous warlords of past had taken up arms to defend their economic fiefs.

Then, on August 6, Zaranj, the capital of Nimroz province on the border with Iran, suddenly fell into the hands of the Taliban. Like dominoes, other provincial capitals began to fall, even in places like Kandahar, where Afghan forces had defended well for months.

By the morning of August 15, the Taliban had practically surrounded Kabul, the country’s capital, and thousands of US troops had landed to evacuate the US embassy.

By the end of the day, the Western-backed government, including Mr Ghani, had fled and the US flag had been lowered over the embassy. What would become a mob of tens of thousands of Afghans began to form at the gates of the international airport, fearful of what their new Taliban rulers would do.

Others, however, were relieved, grateful that a violent siege of the city, much like the one during the civil war of the 1990s, had been avoided. When the insurgents moved into Kabul, some city neighborhoods celebrated their arrival.

Instead, the violence centered around the airport as crowds flocked to the gates, sandwiched between the rifle butts of the Taliban — desperate for safety in the sprawling capital of some five million people — and the gun barrels of the Americans carrying the gates defended.

By the end of the month, tens of thousands of Afghans had been evacuated from Kabul to countries around the world. The last American cargo planes had taken off, leaving behind blown debris and celebratory Taliban gunfire. Thirteen Americans and nearly 200 Afghans were killed in an Islamic State suicide bombing, and soon after, the US responded by accidentally killing 10 civilians in an airstrike intended to punish ISIS.

The end of the long US war in Afghanistan had been brief and violent, and now a new chapter of Taliban rule began as the group suddenly sought to turn from a guerrilla insurgency into a government of some 40 million Afghans.

Now we have seen that the Taliban have in fact reverted to many of the repressive and harsh ways that characterized their regime in the 1990s. But when the summer ended last year, nothing was clear except that the world had changed in an instant.

Above and below Kabul in early July last year.

At a security checkpoint in Herat for vehicles and motorcycles entering the city in mid-July 2021 from the nearby Taliban-controlled area.

Afghan commandos in July in Kunduz, a provincial capital in northern Afghanistan that had been cut off from all sides by Taliban insurgents.

A woman and children flee their home in Kandahar, Afghanistan on August 4, 2021.

A Taliban fighter attempts to hit a woman who was waiting to enter the Kabul airport with her family on August 18, 2021.

Khalil Haqqani, a prominent Taliban figure, during Friday prayers at the Pul-i-Khishti Mosque in Kabul on August 20, 2021.

Passengers await a security checkpoint for one of the last commercial flights from Kabul on Aug. 15, as Taliban forces approached the city to take control of the city.

Afghans wave their documents at US Marines standing atop the blast walls at Kabul airport on Aug. 22, 2021.

Survivors of the devastating suicide bombing by ISIS at Kabul airport who arrive at the emergency hospital on August 26, 2021.

Afghans flee from Taliban police during a protest in Kabul on September 7, 2021.

Nematullah Naqdi, 28, left, and Taqi Daryabi, 22, journalists working for Etilaat Roz, show their wounds after being beaten by the Taliban while covering a protest in Kabul on Sept. 8.

Both the father and fiancée of Samia Ahmadi, right, were killed Sunday in a US drone strike on a house in Kabul on August 30, 2021.