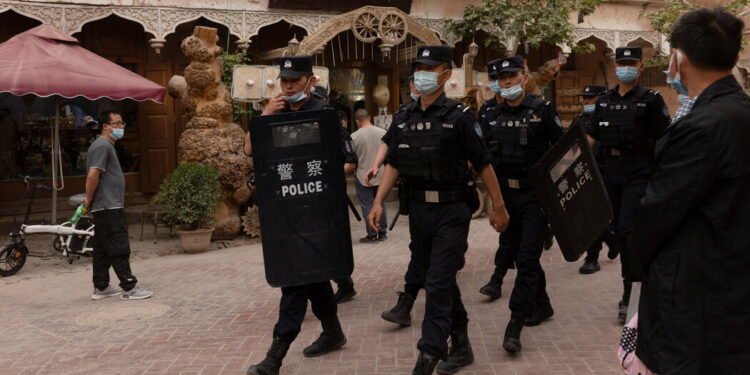 HONG KONG — The United Nations’ top human rights official expressed limited criticism of China’s crackdown on predominantly Muslim minorities, saying on Saturday at the end of her six-day trip to the country that she had raised questions about the application of “counter-terrorism and radicalization measures.” ” but that her visit “was not an investigation”.

The comments by Michelle Bachelet, the first UN High Commissioner for Human Rights to visit China since 2005, were sharply criticized by overseas Uyghurs and human rights activists who had called on her to more strongly condemn China’s policies.

Rayhan Asat, a lawyer whose younger brother is imprisoned in Xinjiang, said Ms Bachelet’s comments “show total disregard for the suffering of the Uyghur people.”

“The crisis has been going on for six years and needs no further investigation than sentencing,” she said. “We didn’t see any of that in her comments.”

Ms Bachelet, who spoke via video with China’s leader Xi Jinping during her trip, described the main outcome of the visit as the opportunity to discuss concerns “at the highest level” and identify areas “that will be very helpful in the future.” could have continued to work together and collaborate.”

During her talk with Mr Xi, she said it was a priority to engage with the Chinese government on human rights, adding that China has “a crucial role to play within multilateral institutions” in addressing threats to peace. , climate change and inequality .

Human rights groups were critical of Ms Bachelet’s emphasis on involvement with the Chinese government. “That mandate requires a credible investigation in the light of mountains of evidence of atrocities, not another toothless dialogue,” said Sophie Richardson, China director at Human Rights Watch.

China’s increasing global power has translated into growing influence within the United Nations. Critics say the lack of pressure on China over its rights record is just the latest example of its success in co-opting multinational bodies, including the World Health Organization, to endorse parts of Beijing’s story about the origins of the pandemic.

Ms. Bachelet praised China’s efforts to reduce poverty, its support for the UN Sustainable Development Goals and its legislation to protect women’s rights.

One of the longest replies during her 45-minute press conference was in response to a question from Chinese state television about the shooting at a school in Uvalde, Texas, which her critics described as a distraction from her mission in China.

“Did Texas Get More Words Than Xinjiang?” asked Mrs. Richardson.

Still, some experts said Ms Bachelet was smart enough to know the limits of such a journey and rightly focused on cultivating ties with the Chinese leadership.

“It is imperative that the high commissioner be seen as involved with the government of China,” Philip Alston, a former UN special rapporteur on extreme poverty and human rights, told an online forum Friday. “The very fact that she had a direct exchange with President Xi Jinping is an achievement.”

Ms Bachelet first suggested visiting China in 2018 as “deeply disturbing” allegations spread of an extensive campaign of repression against predominantly Muslim minorities in the far west of the Xinjiang region.

Rights groups and scholars say China has held a million or more people in indoctrination camps, often because of mundane behaviors such as traveling to Muslim countries or showing signs of religious devotion. Authorities have destroyed mosques and shrines, imprisoned scholars and intellectuals and forced people into programs of work that experts say amounts to forced labour.

China first denied such a campaign, but then summed it up as an occupational program designed to ward people off terrorism and religious extremism.

Prior to Ms Bachelet’s trip, many Uyghurs abroad appealed to her to visit relatives who have been in prison or who have not been heard from for years. They also called on her to confront Chinese leaders about their policies in the region, which the United States and some other governments have labeled as genocide.

The Chinese authorities refused to allow an investigative trip and went to great lengths to portray the story surrounding Ms Bachelet’s visit. When speaking to Mr Xi, the state media quoted her as praising China for “protecting human rights”. Within hours, Ms Bachelet’s office responded, pointing to “her factual opening remarks,” which made no mention of admiration for China’s record of rights.

At her press conference, Ms Bachelet called for the protection of Tibetan identity and said the arrests of activists, journalists and others in Hong Kong under the area’s national security law were “deeply disturbing”.

Her references to the crackdown in Xinjiang were in the language of the Chinese government, which has described its program as a response to terrorist attacks. She said she had “raised questions and concerns about the application of counter-terrorism and deradicalisation measures and their wide application, in particular their impact on the rights of Uyghurs and other predominantly Muslim minorities.”

She also said she questioned the lack of judicial oversight of camps and reports of excessive restrictions on legitimate religious practices.

Ms Bachelet said that during her two days in Xinjiang, she visited a prison and the site of a former indoctrination camp, using the official designation of VETC or Chinese government vocational education and training center. She said the government assured her that the system had been “dismantled”, but acknowledged that it was “incapable of assessing the full scope of vocational education and training”.

China said it was ending the program in 2019, but DailyExpertNews reporters who visited after that statement found evidence that the camps continued to operate. Satellite images have shown that China has expanded a variety of detention centers in the region, and prisons have grown following a surge in convictions.

Some overseas Uyghurs say relatives in the region were threatened and locked in their homes during Ms Bachelet’s visit. Kalbinur Gheni, a Uyghur living in Virginia, said she received threatening messages from Chinese officials after posting a message on Twitter asking Ms Bachelet to investigate her incarcerated sister’s case.

Ms. Asat said she learned that her parents in Urumqi, the regional capital of Xinjiang, were not allowed to leave their home during Ms. Bachelet’s trip, apparently out of concern that they would meet her.

Ms Bachelet said she heard from people seeking information about relatives in Xinjiang and raised many such cases with authorities, but declined to go into details. She said her office would ask questions about harassment through direct channels.

Vivian Wang contributed to the report.