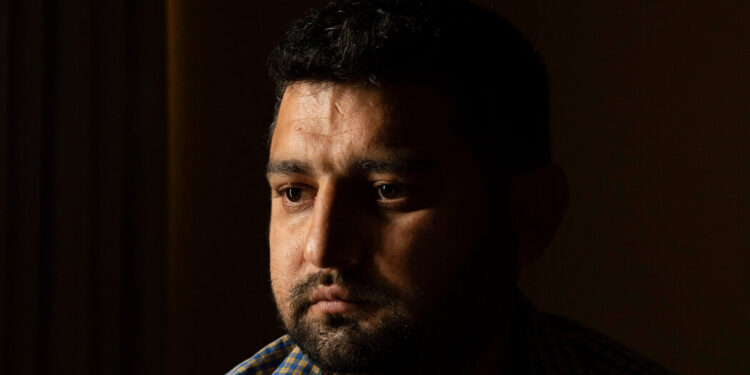 We have a saying in Afghanistan: People age according to the grief they experience, not the number of years they live.

A year after being evacuated from Kabul as the Taliban rampaged through the city I’d called home for nearly a decade, these words come back to me every time I look at my face in the mirror. My hair has gone gray, the lines in my forehead are deeper. When I send pictures of myself to my mother, who still lives in Afghanistan, she writes, “What have you done to yourself?”

On August 15, 2021, the morning started out like a normal workday, but within a few hours, my family and I had to pack our lives into a few backpacks and leave the country. We left everything from diaries to books to family photos.

My life and the lives of millions of other Afghans were turned upside down.

We are still trying to understand what happened. Our physical selves are the most visible reminder of how our lives changed so abruptly on a summer’s day—it reminds us that we still exist, even though we feel so alien in these new lands that are nothing like the home we’re living for. have fled.

I am now in the United States and although I am physically safe, my psychological well-being is anything but. Everything is so different here and I have no idea how most things work: where do I park my car? How do I pay my bills? And by the way, how does US health insurance work?

As we climbed aboard that hulking American cargo plane that seemed to scream as it took off from Kabul International Airport, the American troops on board told us where to sit, but they didn’t tell us how difficult our lives were soon to become.

So now I have to work hard to avoid missing my rent payment or else I won’t be able to rent a house. Did you know that when you rent a house or a car, they check your credit? But if you’re completely new to the country, you won’t have one.

A feeling of loneliness comes over me, and I think it could be here for a while. Life in America seems so individualized. People I see bobbing in the streets are happy to be alone. They don’t have big families like we do in Afghanistan. They don’t see their relatives as often as we do. They seem so busy – too busy to make a meaningful connection with someone like me.

In Afghanistan, there are greeting habits that everyone follows before actually having a conversation. “How are you? How is your family? How is your work?” We used to laugh about it in Kabul, but now I really miss it.

This was a year of fear, worry and grief for so many Afghans. And with the distance between my new American neighbors and myself almost palpable, I reached out to my Afghan friends scattered all over the world.

They, like me, have invested so much in a government and way of life that we never expected would collapse, or have the United States lag behind as the Taliban drew closer.

When I asked my friends how they were doing, a year after we fled, their answers brought tears to my eyes. I was never known to be an emotional person and was almost proud of always being stoic. Even when I was a kid, my parents took me to the doctor because I never cried.

But now hardly anyone I know in Afghanistan or beyond is doing well.

And I cry. Often.

Khalid Abidi, a school friend of mine, ran a huge project for the Afghan state-owned electricity company. He did very well in his career before the Taliban takeover.

Despite receiving several offers to work abroad, he preferred to stay in Afghanistan. But last month he told me he lost everything after the new Taliban government shut down the project.

Khalid is still in Afghanistan. He can’t find a way to leave.

“There is no life and future in Afghanistan, it is complete darkness here.”

Orooj Hakimi, a former Reuters journalist in Kabul who fled to the West, struggles with similar issues. “I’ve worked so hard for free speech and invested a decade of my life,” she told me. “But with the Taliban takeover, I lost everything. It is so painful, so painful when words cannot describe it.”

Orooj, 33, said she grew much older in the past year. The sadness of Afghanistan’s collapse was visible on her face shortly after the fall of Kabul. Streams of gray hair sprouted seemingly overnight, she said, and when she FaceTimed with friends and relatives, they continued to bring out the changes in her face.

She had lived in Kabul and dined most evenings around a single table in her parents’ house with her mother, father, siblings and often extended family. But now her loved ones are spread across three different countries. “My sisters are stuck in Afghanistan, my parents in Pakistan and I’m in a different corner of the world.”

Orooj first experienced the life of a refugee as a child in the 1990s. Her father was employed by the Soviet-backed government, and when the Taliban took over in 1996, they were forced to leave Afghanistan. Last summer she had to take refuge again in the same country, Pakistan.

“The past year feels like a hundred years to me,” she said. “I’ve been through so much and lost so much.”

So many friends I spoke to feel the same. As the anecdotes added up, I couldn’t help but think of another saying we have in Afghanistan: we are the flour between two millstones.

I shudder to think of my generation being ground to powder, sandwiched between the fear of being refugees as I watch the Taliban dismantle the country we grew up in.

But for now, all we can do is wake up, look at ourselves in the mirror, and hope that today, if only for a moment, will be better.