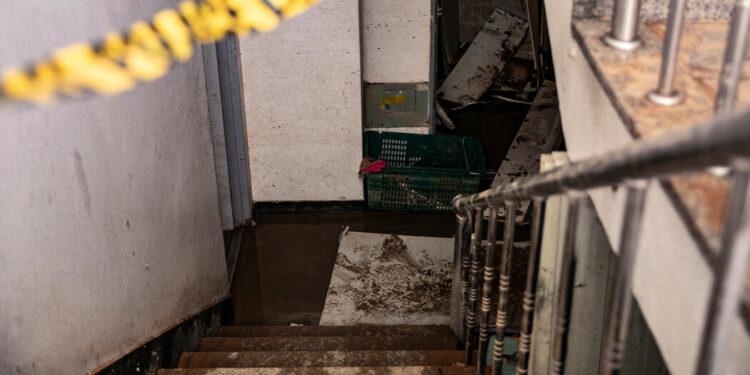 SEOUL – Monday at 4:40 pm, the 13-year-old girl texted her 72-year-old grandmother who was in the hospital, wishing her well and saying that she was praying for her speedy recovery.

“How sweet of you, my little puppy!” the grandmother texted back.

That was the last time she spoke to her granddaughter.

Four hours later, floods caused by one of South Korea’s heaviest rainfall poured down the stairs to the three-room, semi-underground house in southern Seoul, where the teen had lived with her mother, 47, and her aunt, 48.

The family had moved into the house seven years ago. They knew the low-lying district was vulnerable to flooding, but it was cheap and close to a government welfare center where the aunt, who had Down syndrome, could get help.

Heavy rains that hit the Seoul metropolitan area from Monday to early Wednesday left six people missing and at least nine dead, including the family of three, highlighting the predicament of South Korea’s urban poor as well as the housing crisis and growing inequality in the country.

The water rolled down with such force that the family could not push open their only door, according to neighbors and emergency services. The girl’s mother banged on the door and called her neighbors for help. The neighbors called the government emergency hotline 119 on behalf of the family, but there were so many flood victims calling that their calls went off.​

Two nearby men tried to save the family through the street-level window of the house, but they were unable to get through the anti-theft steel grille blocking the window. “The water filled the house so quickly that we couldn’t do anything about it,” Jeon Ye-sung, 52, a neighbor, told reporters.

Mr. Jeon rushed home Monday night after his daughter told him on the phone that water was flowing through the windows into their own semi-underground home. He broke the windows to save his three daughters. But he and another neighbor couldn’t reach his neighbors.

By the time rescue officials pumped out the water early Tuesday, they found the family of three dead.

The poor in South Korea’s cities often live in banjiha, or semi-underground houses. The danger of flooding from these underground houses was portrayed dramatically in the South Korean film ‘Parasite’, which became the first foreign language film to win the Academy Award for Best Picture in 2020.

One of the nine killed was a woman in her 50s who also lived in a semi-underground house in Seoul. She fled the floodwaters, but returned to her home to rescue her cat and didn’t make it out alive.

In Seoul, a city where skyrocketing house prices are one of the biggest political problems, living high and dry in high-rise apartment buildings built by the country’s conglomerates such as Samsung and Hyundai is a status symbol.

But the poor often live in cheap, damp and musty banjiha. Hundreds of thousands live in such homes in the busy metropolitan area, where they struggle to find jobs, save money and raise their children to overcome growing inequality.

Over the years, Seoul has offered to help people living in such basement apartments by providing them with pumps and other equipment to fight flooding. It has also renovated sewer systems in low-lying neighborhoods to drain rainwater faster. The government has urged those living in semi-underground basements to move to state apartments with cheap rents.

Yet thousands of families live in it banjiha, for fear of flooding every monsoon season. They build small dikes with sandbags around their houses. When the floodwaters recede, they lay their clothes and furniture in alleys to dry. In a 2020 survey, more than half of 500 semi-underground households in two districts in Siheung, just southwest of Seoul, reported that their homes were submerged in rainwater.

“When I got home from work, I found my banjiha underwater,” a semi-subterranean resident wrote on South Korean web portal Naver on Tuesday. “It felt like the sky was crashing down on me.”

When President Yoon Suk-yeol visited the neighborhood where the family of three died on Tuesday, their house was still filled with water up to their waists. Pillows, furniture and plastic bags floated in. Mr. Yoon had to crouch outside on the street to look down through the street-level window.

The neighborhood was littered with bags of trash, rain-damaged furniture, and electronics that families dragged from their basement homes. “There’s almost nothing we can save,” said Park Kyong-ja, 77, who has lived in the area for 26 years.

Choi Tae-young, the head of the Seoul Metropolitan Fire and Disaster Headquarters, blamed the floodwaters for blocking the door of the family’s home. But neighbors accused the government of failing to warn residents about the coming floods. The city did not warn of the danger from a nearby stream until 9:21 p.m. on Monday, according to local media and neighbors.

From their home, the family of three called neighbors for help between 8pm and 9pm because they couldn’t get out. The teen’s mother, who was identified only by her last name, Hong, by police and local media, also called her mother at the hospital at 8:37 p.m. and said she was unable to open the door because of the flood waters, according to the daily newspaper. Joong Ang Ilbo.

“When I got out and ran to their house, it was already filled with water and I couldn’t see the inside,” Kim In-sook, a neighbor, told reporters. It was not until hours later that police and firefighters were able to pump out the water.

Hong Seok-cheol, 46, who lives in a semi-underground house next door, left at 7:45 p.m. Monday to go out for dinner with his wife. When the couple returned home 40 minutes later, they were shocked to find them flooding the alley. Their house was full of water.

“The rain came so quickly and furiously and the pressure on the underground drainage pipes was so strong that they burst, exacerbating the flooding,” said Mr. Hong. “My wife and I couldn’t possibly have made out if we were locked inside.”

Some of the household items belonging to the family of three lay outside the four-story building on Wednesday, including a white teddy bear. In the underground garage, four cars were caked with mud.

“The heavy rainfall was the worst in 115 years,” Mr Yoon, the president, said during a meeting with emergency officials on Wednesday. “The poor and the weak are more vulnerable to natural disasters. Our country becomes safe when they feel safe.”