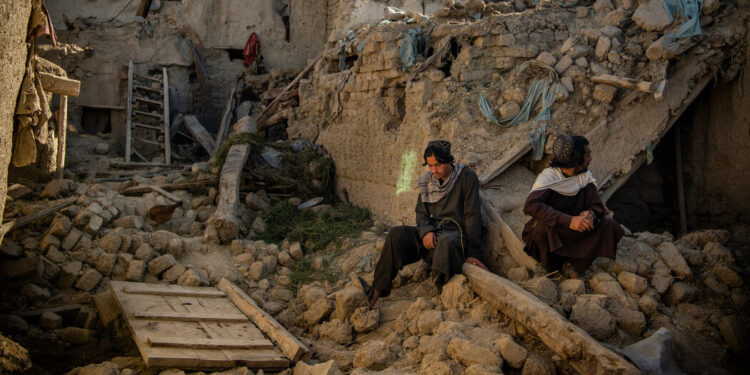 GEYAN, Afghanistan – As dawn broke over his village on Friday morning, Abdul Qadir dug through the rubble of his childhood home, desperate for a small bag of flour buried somewhere beneath piles of wood and dust.

Like many in this desolate part of eastern Afghanistan, the small pouch was the only food his family had before a devastating earthquake destroyed half the village last week. Nearly a year since the Taliban took power and an economic crisis swept the country, villagers could no longer afford the firewood he once collected and sold for a few dollars a day. The price of food in the local bazaar doubled. He accumulated 500,000 Afghans – more than $5,000 – in debt from shopkeepers until they refused to lend him more.

Then, on Wednesday, the mountains around him erupted in a violent rumble that caused the walls of his house to collapse and kill six members of his family. When he looked at the remains of his house, he was lost.

Last week’s earthquake on Wednesday wreaked havoc in this remote, mountainous region of eastern Afghanistan, killing around 1,000 people and destroying the homes of thousands more. It was a devastating blow to a place that had suffered unrelenting hardship for decades and had desperately hoped for some sort of reprieve after the war ended and the Taliban took control of the country.

The people of the Geyan District benefited little from the American era in Afghanistan. This is one of the poorest places in the country, and people survive hand-to-mouth on the little money they earn by collecting firewood and harvesting pine nuts every fall. Then, as now, the government was aloof and families had to rely on each other when times got tough.

The arrival of the Taliban regime has not changed that here. While government officials are making efforts to bring relief supplies to the area after the earthquake, it will have little lasting effect on the worsening despair of everyday life, or the suffering of widespread death.

During the 20-year war between the Taliban insurgency and the previous Western-backed government, residents were entangled in grueling fighting that ripped through villages in this swath of Afghanistan. Shelling from Pakistan — targeting Pakistani militants seeking refuge along Afghanistan’s eastern border — has rained down from the sky, killing civilians and destroying homes. Nature itself has wrought its own violence with frequent floods, hail storms and deadly earthquakes woven into the fabric of life here.

After the Taliban took power, many residents hoped that the end of the war would bring some relief. Instead, the shelling from Pakistan continued as militants, encouraged by the Taliban takeover, poured into the area. A severe economic crisis, caused by international sanctions and millions in foreign aid that disappeared practically overnight, decimated people’s incomes and pushed food prices up. According to the World Food Programme, about half of the country’s 39 million residents currently face life-threatening levels of food insecurity.

For many in these remote villages, the devastation seemed to provide a heartbreaking reminder that the violence and hardships were far from over, despite the end of the two-decade war.

“We were very happy that the war was over, we thought our lives would be better – but because of the economy it is more dangerous now than during the war,” said Sher Mohammad, 60. “We are not thinking about bombs now, but we dying day by day because we have no food.”

As he spoke, another small tremor shook the dull beige earth beneath him.

Wednesday morning’s earthquake had completely destroyed Mr Mohammad’s home in Stara Geyan village in Geyan district – one of the worst hit by the quake. Without food or shelter, he and his family had come to a nearby village, Azor Kalai, to stay with his family. In many ways, the family members’ home was his last remaining lifeline.

For years he and three brothers lived together. They shared the money they earned collecting firewood on the backs of their donkeys and worked as laborers on the farmland of other villagers. It was a meager existence, but enough to buy flour, rice, cooking oil, and the other necessities the family needed. They have even saved enough to expand their shared home and send Mr. Mohammad’s two sons to school in the provincial capital.

But after the economy virtually collapsed after last August’s Taliban takeover, suddenly each brother could barely earn enough to feed their own children – let alone share them with each other. Unable to provide his family with anything but stale bread and tea, he called his 22- and 20-year-old home from school to make ends meet by selling everything they could in a nearby bazaar.

“Their future is gone,” he said. “If they studied, they could find a good job. But now with the economy they’ve left everything behind – I doubt they’ll ever be able to continue their education.”

As men waited to register their families’ names to get help, military helicopters carrying Taliban officials buzzed overhead as trucks full of supplies from the capital Kabul seeped into the village. It took more than 24 hours for many of the vehicles to make the 250-mile journey over the dirt roads that wind through the rugged terrain dotted with shrubbery, damp riverbeds, beige mud houses jutting out of the hillside, and a patchwork of farmland crisscrossing the valleys. in between.

Two days after the earthquake, most residents interviewed by DailyExpertNews said they had received no government assistance. Instead, as during crises under the previous Western-backed government, they largely depended on each other in the immediate aftermath of the earthquake.

Villagers from neighboring districts whose homes remained intact led efforts to rescue people trapped under the rubble — digging with little more than their bare hands — and bought grave cloths, 20 yards of white linen, for the hundreds of dead. They drove for hours from seriously injured victims to hospitals in their small, dilapidated Toyota Corollas. Relatives from across the province brought bread, rice and plastic sheeting to makeshift shelters. Dazed residents shuffled through the rubble of their homes, desperate for what they could find: a bag of rice here, a kettle there.

On a meandering riverbed from the relief center, Sharif, 25, began searching the rubble of his childhood home around 4:30 a.m. Friday morning for kitchen supplies and food he could find. Two hours later, when he pulled their freezer from the remains of one room, the wall of another collapsed, attracting dozens of his neighbors who feared it was trapped under the rubble.

Despite everything, he considered himself lucky. His entire family survived Wednesday’s earthquake after he woke up to the first tremors and told everyone to run to the garden — a lesson his parents instilled in him when he grew up in the mountains where nature itself waged war on its inhabitants. .

“Often they would gather us and tell us that if there is heavy rain or hail, we should not leave our rooms and stay safe inside, but if the ground starts to shake, go outside because the walls of dust and wood can collapse. “, he said.

But as he moved through the rubble, the gratitude he felt for his family’s safety gave way to despair at what they would do next.

For two years, they had barely earned enough to eat after travel restrictions due to the coronavirus pandemic prevented his father from going to Saudi Arabia for work — an income stream that sustained his family for decades. Even after those restrictions were eased, the Taliban takeover pushed the visa price up to more than his father could afford, as hundreds of thousands of Afghans try to leave the country to find work.

He and his brothers tried to make up for lost income by selling firewood, but when the economy deteriorated, they couldn’t find anyone to buy it. Shopkeepers agreed to give them food on credit. He didn’t spend so much time in his house anymore; the cries of his children begging for food he didn’t have broke his heart, he said.

After the earthquake, he built a small tent for his family out of tarpaulin that his relatives had brought for them in a nearby neighborhood. Next door, their two cows and three goats roamed as his wife and their children searched the few pots and pans they’d found under the rubble.

“After this earthquake I completely lost control” Sharif’s wife, Ali Marjana, 22, said sitting on the floor in their makeshift home.

“I can’t explain it, we have nothing to eat, no money, no way to find money,” she added. “Look at us, we now live like animals.”