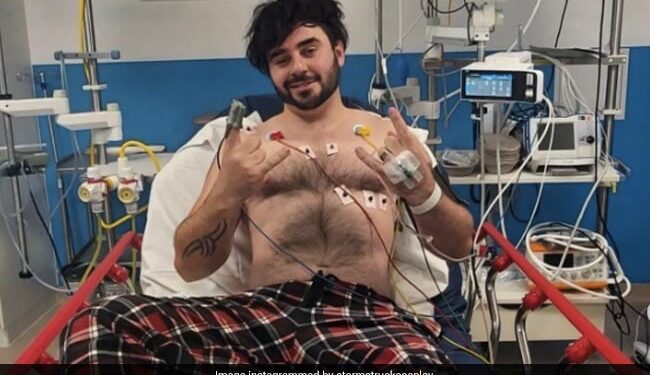 The photo shows Mr Rowan being checked at the hospital after being struck by lightning.

This is the story of an incredibly lucky man who survived a lightning strike. The British man only has scars on his right arm after the accident. Surprisingly, the lightning strike occurred while he was playing a video game in his living room, according to a report in Oxford Post.

Aidan Rowan was playing on his PlayStation on Monday, Sept. 5, when at 10:30 p.m. he heard a loud bang and felt a heaviness in his body, the outlet said.

The 33-year-old, who lives in Abingdon, England, was taken to John Radcliffe Hospital, where staff said he appeared to have been struck by lightning.

Mr Rowan was allowed to return home with some medication after being monitored for eight hours. “I was sitting on the couch playing a game where you play like a stray cat and it was thundering outside,” he said. Oxford Post.

“There was a very loud clap of thunder and I felt kind of a very heavy feeling all over and then a scorching heat in my right arm, where there are burns now,” the man added.

“It took me about a minute to come to my senses, I felt very, very confused. I went upstairs and asked my husband for a wet towel as I didn’t know what had happened but my arm was burning “Rowan continues. said. His heartbeat was irregular before, but returned to normal after a few hours.

In addition, he stated that doctors thought the lightning “bounced off the water and through the window” because of the effect of the warm weather on the roughness of the ground, causing rainfall to collect on the summit.

He also shared a post on Instagram along with a photo of himself in the hospital. He has also said he will stop playing cute cat games during a thunderstorm.