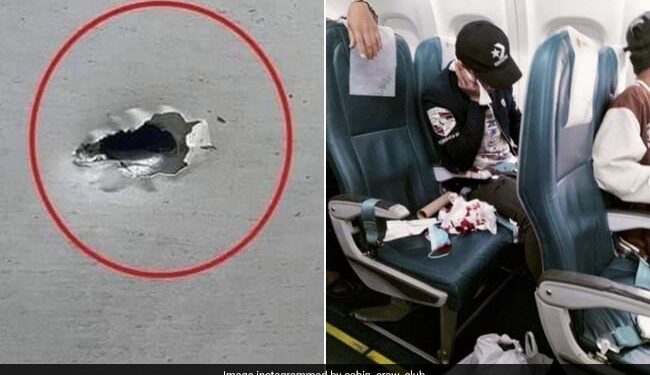 The aircraft was shot down at an altitude of more than 3000 feet.

An airline passenger was recently injured after a bullet fired from the ground hit him in the air. The man was on a Myanmar National Airlines plane, which was about to land in Loikaw, Myanmar, when he was hit Friday morning.

A photo shared on Instagram by ‘cabin_crew_club’ showed the victim sitting in his chair, slumped and with a tissue on the right side of his neck and cheek. Another photo also showed the hole in the fuselage of the plane made by the bullet.

Take a look below:

According to news agency Myanmar Nu, officials reported that a 63-passenger ATR-72 aircraft had been shot down at an altitude of more than 3,000 feet. The man on board sustained an injury to the right side of his face.

Authorities identified the man as a 27-year-old traveling from Naypitaw to Loikaw. Upon landing, he was rushed to hospital.

Authorities said the bullet pierced the plane before hitting the passenger. Myanmar’s military council accused two resistance fighters – the Karenni National Progressive Party (KNPP) and the People’s Defense Force – of firing at the plane. However, the KNPP has reportedly said that their organization was not involved in the alleged shooting and is avoiding civilian targets.

Meanwhile, as per Myanmar Nu, flight bookings for Loikaw-bound flights have been canceled until further notice. Myanmar’s military has also reportedly deployed troops near the airport and has carried out house searches in the area.