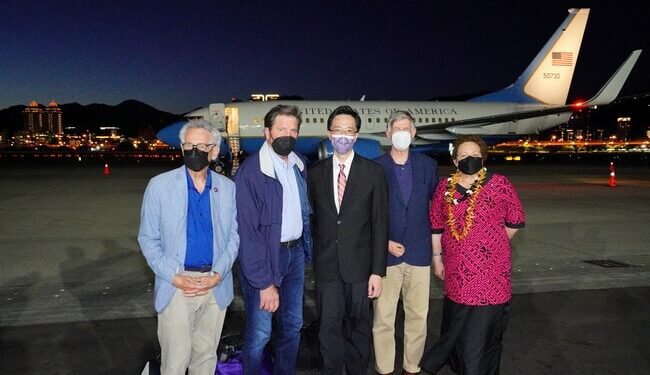 A Taiwanese official welcomes US representatives at Taipei airport.

China said Monday it had organized new military exercises around Taiwan as a delegation of visiting US lawmakers was to meet with the island’s leader just weeks after a similar trip by House Speaker Nancy Pelosi raised fears of conflict.

The unannounced two-day trip came after Beijing sent warships, missiles and jets into the waters and skies around Taiwan, a self-governed democracy that Chinese leaders claim and have vowed to seize someday.

The five-member congressional delegation — led by Massachusetts Senator Ed Markey — was scheduled to meet with President Tsai Ing-wen on Monday, followed by a State Department banquet.

The two-pronged trip sparked a caustic response from Beijing, which said it had conducted “combat readiness patrols and combat exercises in the sea and airspace around Taiwan island” on Monday.

“This is a solemn deterrent against the US and Taiwan as they continue to play political tricks and undermine peace and stability in the Taiwan Strait,” Shi Yi, spokesman for the Chinese military’s Eastern Theater Command, said in a statement. promising to “resolutely defend national sovereignty”.

The government of Taiwan has accused Beijing of using Pelosi’s visit as an excuse to launch drills that would allow it to prepare for an invasion.

China’s communist party has never ruled Taiwan but says it will use force if necessary to take the island.

That decades-old threat was echoed in a white paper published last week when China’s Taiwan Affairs Office said it “would not refrain from using force” against its neighbor and “retained the option to take all necessary measures.”

However, it added: “We will only be forced to take drastic measures to respond to the provocation of separatist elements or outside forces if they ever cross our red lines.”

Taipei has remained defiant during the standoff with Beijing, with a ruling party lawmaker telling AFP this week’s congress visit proved the island had not been intimidated by China’s threats.

“Their visit shows once again that China cannot dictate or instruct other countries’ politicians not to visit Taiwan,” said Lo Chih-cheng, a lawmaker with the ruling Democratic Progressive Party (DPP).

“At the same time, it also demonstrates and sends an important message – that the people of the United States stand behind Taiwan.”

Pelosi supported her visit, but President Joe Biden said the US military was opposed to the trip of his fellow Democrat, who is second in line to the presidency after the vice president.

Congress is constitutionally an equal branch of government in the United States, with lawmakers free to travel where they please, and Taiwan enjoys bipartisan support in divided Washington.

The United States switched diplomatic relations from Taipei to Beijing in 1979.

But it remains an important ally of Taiwan and maintains de facto diplomatic relations with Taipei.

Washington’s official policy is against Taiwan’s independence as well as China forcibly changing the status of the island.

It remains intentionally ambiguous about whether it would come to Taiwan militarily if China invaded.

Visits by senior US officials to Taiwan have been going on for decades, and even Pelosi’s journey was not without precedent—then Speaker of the House of Representatives Newt Gingrich visited in 1997.

But the frequency and profile of US visits has increased under both former President Donald Trump and Biden.

Taiwan has also seen a flood of delegations from Europe and other Western allies in recent years, in part in response to Beijing’s more aggressive stance under Chinese President Xi Jinping. 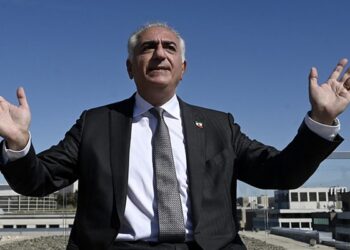