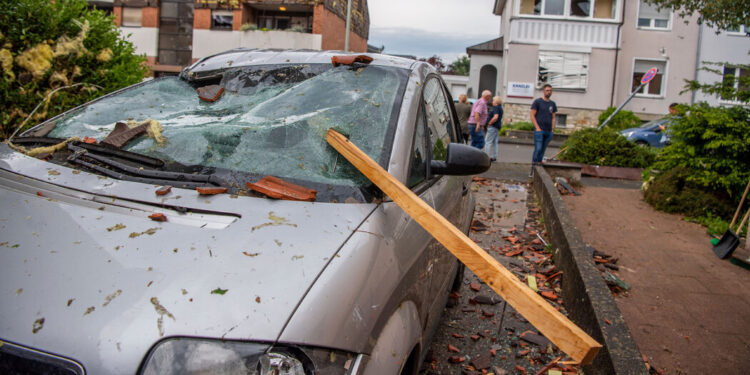 At least one person was killed and dozens injured after three tornadoes hit West Germany, local authorities said Saturday, as extreme weather in Europe threatened the continent elsewhere as well.

One of the tornadoes left “a picture of horror” in Paderborn, Germany on Friday, the city’s mayor, Michael Dreier, told reporters on Saturday. Strong winds and torrential rain tore buildings apart and caused flooding. At least 43 people were injured in the storm, some seriously, a statement from the city’s police said.

“An unspeakable tornado swept across Paderborn and severely devastated parts of the city,” Dreier said. He said trees had snapped like matches and residential buildings had been left uninhabitable.

In Wittgert, in the far west of Germany, a 38-year-old man was killed in a fall in his basement, which had been flooded amid the storms. Local news media said he had suffered an electric shock and most likely hit his head and was unable to be resuscitated.

The storm system was expected to dissipate on Saturday, the German Weather Service said, but police in some areas urged residents to stay at home and said strong winds continued to pose a danger to the public.

Further south in Europe, an unusually early heat wave on Saturday pushed temperatures higher in Spain and in parts of France, which were sweltering below what was expected to be the warmest May on record, meteorologists said, a sign of things to come this summer.

While individual weather events are difficult to relate to climate change, experts say it is one of the driving forces behind the increasing heatwaves and storms that have hit Europe in recent years.

This weekend in Spain, where the state’s weather forecaster has forecast an unusual heat wave, officials have warned residents to stay hydrated, avoid hot areas and care for those prone to the heat, including the elderly and children. In some parts of the country, temperatures are expected to exceed those of an average spring by about 10 degrees Celsius or about 50 degrees Fahrenheit, reaching as high as 107 degrees Fahrenheit in the southern region of Andalusia.

France and Italy are also experiencing earlier-than-expected heatwaves this month, which could break spring weather records, according to meteorology experts.