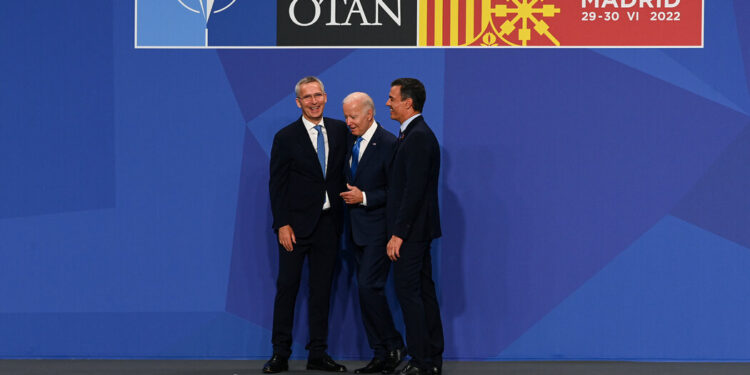 MADRID – Facing a new aggressive Russia, NATO leaders on Wednesday outlined a muscular new vision that names Moscow as the main opponent of the military alliance, but also, for the first time, that China is a strategic “challenge”.

It was a fundamental shift for an alliance that was born in the Cold War but came to see a post-Soviet Russia as a potential ally and not target China at all.

But that was before February 24, when Russian troops poured into Ukraine across the border, and Chinese leaders emphatically did not agree with the global condemnation that followed.

“The deepening of the strategic partnership between the People’s Republic of China and the Russian Federation and their mutually reinforcing efforts to undermine the rules-based international order are against our values ​​and interests,” NATO leaders said in a new mission statement released at their summit in Madrid.

The announcement came on a day when a top US intelligence official said victory in Ukraine was not yet within Russia’s reach, the two sides said they had exchanged more than 200 prisoners of war, and a Ukrainian official said: “There is fighting everywhere. .”

In a flurry of steps at the summit in Madrid, which ends Thursday, President Biden and other NATO leaders sought to respond to President Vladimir V. Putin’s resurgent and belligerent Russia. Just before publishing the mission statement, they formally invited the as-yet unaligned Scandinavian countries of Finland and Sweden to join, paving the way for NATO’s most significant expansion in more than a decade.

“At a time when Putin has broken the peace in Europe and attacked the tenets of the rules-based order, the United States and our allies, we are going to stand up,” Biden said. “We’re getting up.”

China offered a cold response to the new NATO moves.

For his part, Mr Putin kept his attention in Central Asia, where he paid a visit to bolster support for Moscow – all the more important now that the West has begun to turn Russia into a pariah nation.

In an apparently calculated piece of counterprogramming from the Kremlin, the Russian president attended his own summit: a meeting in Turkmenistan of the five countries on the Caspian Sea. He flew from Tajikistan to Turkmenistan early Wednesday, on the second leg of a two-day journey that took him out of Russia for the first time since the war in Ukraine began in February. It was also his first overnight overseas trip since the start of the pandemic.

Speaking briefly to the other leaders at the summit, including the presidents of Kazakhstan, Iran and Azerbaijan, Mr Putin spoke about trade, tourism, fisheries and environmental issues, though he did not say a word about NATO or Ukraine.

But later in the day, during a meeting with reporters after the summit was over, Mr Putin mocked the importance of Finland and Sweden joining NATO – all the while issuing a warning.

“If military contingents and infrastructure are deployed,” he said, “we will have to respond in kind and create the same threats against the areas from which threats against us are created,” Mr Putin said. “Obviously. What, don’t they understand?”

“We welcome a clear stance on Russia, as well as the accession of Finland and Sweden,” Ukraine’s Foreign Minister Dmytro Kuleba said on Twitter. “An equally strong and active stance towards Ukraine will help to protect Euro-Atlantic security and stability.”

But it was far from clear that this week’s developments could help Ukraine turn the tide in a war in which its forces remain heavily outnumbered and underprivileged. Mr Putin seems unmoved by foreign condemnations and sanctions as his forces use their superior artillery to bomb Ukrainian cities into submission.

On Wednesday, Ukrainian and Western officials said Moscow is sending thousands more soldiers and heavy weapons into eastern Ukraine as it struggles to claim the last piece of sovereign Ukrainian territory in eastern Luhansk province.

“There is fighting everywhere,” said Serhiy Haidai, head of Luhansk’s regional military administration. “Everywhere the enemy is trying to break through the defense line. They try to destroy all the settlements, only to enter the area later, not the settlement.”

He said the Russians used rocket-propelled grenade launchers, artillery, mortars, tanks, bombers and long-range missiles to clear the country of life so their infantry could advance.

The scorched earth tactics have allowed the Russians to creep ever closer to Ukrainian positions in the city of Lysychansk in Luhansk province, part of Moscow’s push to claim the entire Donbas region of eastern Ukraine. But even with the remarkable outlay of ammunition, the gains have been sluggish.

Russian officials have rejected claims of atrocities against civilians in Ukraine and insist that they limit their attacks to legitimate military targets.

“They may go for military structures, but they mainly affect civilian infrastructure,” Vitaly Kim, the governor of the Mykolaiv region of southern Ukraine, said during a news conference on Wednesday. “I think they are trying to scare the locals and demoralize our military.”

In her first public update in more than a month, Avril D. Haines, the director of the Biden administration’s national intelligence agency, said that Mr. Putin still seemed to want to conquer most of Ukraine, but that in the short term, a breakthrough by Russian troops in the east of the country remained unlikely. The consensus among US intelligence agencies is that the war is likely to last a long time, Ms Haines said.

With no signs that a ceasefire could be imminent, Ukraine announced the largest POW exchange since Russia launched its invasion, including dozens of Ukrainian soldiers defending against the Russian siege of Mariupol, the southern port city that became a symbol of Ukraine. resists.

While the exchange was shrouded in secrecy, Denis Pushilin, the head of the Russian-backed separatist forces in the Donetsk area of ​​Donbas, said 144 Russian and proxy troops were returned in exchange for 144 Ukrainians.

NATO’s expansion came after lengthy negotiations with Turkey, an alliance member that had expressed objections. While it was still unclear on Wednesday what exactly persuaded Turkish President Recep Tayyip Erdogan to change his position, clues emerged. Some related to Turkey’s concerns about Kurdish separatists.

Ann Linde, Sweden’s foreign minister, said Sweden and Finland had formally agreed not to support Kurdish or other organizations that could harm Turkey’s security with weapons or other aid.

“We don’t do that today either, but now it’s written explicitly,” Ms Linde told Swedish Radio. She said her country would continue to provide humanitarian assistance to Kurds and others in northeastern Syria.

Both Sweden and Finland will also lift an informal arms embargo against Turkey that was imposed in 2019 after Turkey intervened in northern Syria. As new members of NATO, Ms Linde said, both countries would have “new obligations to allies, and this includes Turkey.”

And the United States on Wednesday showed a new willingness to sell uprated F-16 fighter jets to Turkey, moving closer to meeting the ally’s long-standing request.

US officials insisted the change had nothing to do with NATO expansion.