A platinum anniversary and ‘Bridgerton’ events await visitors in London 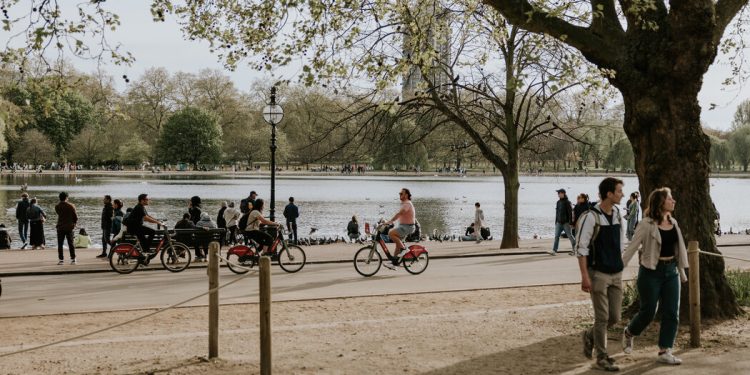 London comes back to life. Heathrow Airport reports that March 2022 was the busiest month since the start of the pandemic, with passenger numbers from North America in particular increasing by more than 60 percent from January 2022.

The increase is linked to the UK government’s recent lifting of coronavirus restrictions, a welcome move for many travelers eager to soak up British culture, including once-in-a-lifetime Platinum Jubilee events and “Bridgerton-based” experiences. Netflix’s intoxicating hit show.

“We love ‘Bridgerton’ and all things royal,” said Tasha Gelling, a Chicago teacher who booked afternoon tea with her daughter Ruth, 16, during their six-day trip to Britain this month. The duo also toured the Tower of London and Hyde Park and spent an afternoon in Bath.

Even with new coronavirus strains on the way and a war raging in Ukraine, many other American travelers are planning trips to the British capital.

“London has remained the second most popular international travel destination for Americans — only after Cancun — for recent vacation times,” said Jen Moyse, vice president of product for TripIt, a travel company app with 19 million users. The volume of flight bookings to London, she said, increased 300 percent when comparing TripIt’s reservation data over the four-month period from April to July to December to March.

During the pandemic, some townspeople have closed their doors. Among them: Cafe de Paris, a West End cabaret venue since 1924; Le Caprice at St James’s, once a favorite haunt of Princess Diana; and the physical locations of Debenham’s, the 242-year-old department store. But all over London, other cafes and shops are bustling, countless new bars and restaurants have opened and city squares teem with everyday life. Many of the Royal Parks are ablaze with daffodils and bursting with picnickers, while live theater is back in the West End. The return of in-person events adds to the vibrancy of the Platinum Jubilee “Central Weekend” in June, when public celebrations will mark Queen Elizabeth’s 70th reign.

Here’s more about what’s new and notable in London.

The latest in restaurants

It is a testament to London’s vitality that new restaurants have opened and are even thriving during the pandemic. One of the most buzzing spots is Sessions Arts Club in Clerkenwell, a redesigned 18th-century courthouse where artwork and crumbling, dramatic decor lend a fanciful patina to Chef Florence Knight’s dish. Dishes like sea bream with parsley and eel with crème frache are deliciously British with a touch of France and Italy (entrees range from 10 to 25 pounds, or about $13 to $32).

Another new hit is KOL, Britain’s first Michelin-starred Mexican restaurant, where chef Santiago Lastra prepares dishes such as pork belly carnitas with cabbage puree. On the ground floor is The Mezcaleria, serving kicky, mezcal-focused cocktails (six or nine-course tasting menus cost £90 and £125, with no wine or mezcal pairings; cocktails at Mezclaria are £15).

Vegans and meat eaters alike will be delighted by Gauthier Soho’s restaurant, which ranges from classic French gastronomy to plant-based fine dining. One dish, rice with truffle “cream”, delivers the richness of dairy through a potato-and-lentil starch combination (the tasting menu starts at £50, excluding wine pairings).

When Leroy in Shoreditch adopted the rotisserie chicken takeaway as a pandemic survival maneuver, the Michelin-starred restaurant may not have imagined the crowds would grow into a standalone eatery. Now Royale sells whole or half corn-fed Anjou chicken, sides such as leek ivinaigrette and a hazelnut parfait dessert (whole chickens cost £30, sides around £10).

Brown’s is the oldest hotel in London, having opened its doors in 1837, but bartender Salvatore Calabrese is inventing new ways to relive the property’s history through cocktails. The First Call honors Alexander Graham Bell (who made the famous first call from Brown’s) with Elephant gin, pistachio pesto, verjuice, coconut syrup, egg whites and white port (£23). Another drink, the Winston – as in Churchill – is whiskey based and spiked with coriander, lime juice and a hint of smokiness (£25).

In Covent Garden, New York-based design firm Roman and Williams has transformed a 19th-century Magistrate’s Court into Europe’s first Nomad Hotel. Selected art and textured materials give spaces a contemporary feel and the restaurant is housed in a three-storey glass atrium (rates from £409).

Kingsland Locke has unveiled 124 sleek apartment-style rooms in the Dalston area of ​​east London, with a coffee shop, microbrewery and kebab restaurant on the ground floor (rates from £123).

The lights are back on in the West End with blockbuster musicals such as “Moulin Rouge! The Musical” and “Six,” a modern chronicle of the fate of Henry VIII’s wives. For those in search of plays, there is “Much Ado About Nothing” at The Shakespeare Globe (until October 23) and the West End openings include “The Glass Menagerie” starring Amy Adams (from May 23 to August 27) and “Prima Facie” starring Jodie Comer, known from “Killing Eve” (until June 18).

Ticket prices vary for various shows, from £5 (standing only) to around £90, and can sell out for popular shows. Weekday tickets and matinees are cheaper and the TKTS stand in Leicester Square offers discounted day tickets. Please note that some theaters have their own vaccine requirements, so double check what documentation is required for entry.

At the Victoria & Albert Museum, the exhibition “Fashioning Masculinities: The Art of Menswear” brings together historical and contemporary ensembles to emphasize the concept of gender fluidity. Expect to see 18th-century frock coats and suits worn by the Beatles to frocks worn by the singer Harry Styles and drag artist Bimini Bon-Boulash (admission to the museum is free and there is no timed entry; “Fashioning Masculinities” runs until Nov).

“Surrealism Beyond Borders” at the Tate Modern explores the global reach of the Surrealist movement with works by lesser-known artists from Osaka, Japan and Bogotá, Colombia, interspersed with paintings by Dali, Miro and Magritte (free entrance to the museum and pre-booking recommended; “Surrealism Beyond the Borders” runs through August).

At King’s Cross, the UK’s first museum dedicated to LGBTQ individuals, Queer Britain opens May 5 with an exhibition of paintings, photographs and paintings collected by Matthew Storey, the art, design and LGBTQ history curator of historic royal palaces.

The Platinum Anniversary and other live events

Britain celebrates platinum anniversary, in honor of Queen Elizabeth as the first British monarch to sit on the throne for 70 years, all year round. But from June 2-5, events such as “Trooping the Color,” a ceremonial parade featuring 1,400 soldiers, 200 horses, and 400 musicians will be held. The parade will march from Buckingham Palace along the Mall with members of the royal family; other festivities that weekend include a concert at Buckingham Palace and a series of street parties.

Hotels also celebrate. The anniversary edition of the Berkeley’s “Prêt-à-Portea” features Her Majesty’s most iconic looks in petit fours and other pastries (£79 per person, available from May 30 to June 12) and on June 5 the Connaught will be hosting an anniversary street party, with an English brass band, garlands and family style tables with tea rolls.

Other non-royal high-profile events that once again welcome spectators include the Chelsea Flower Show (24 to 28 May); the Royal Ascot Horse Racing (June 14 to 18) and Wimbledon (June 27 to July 10).